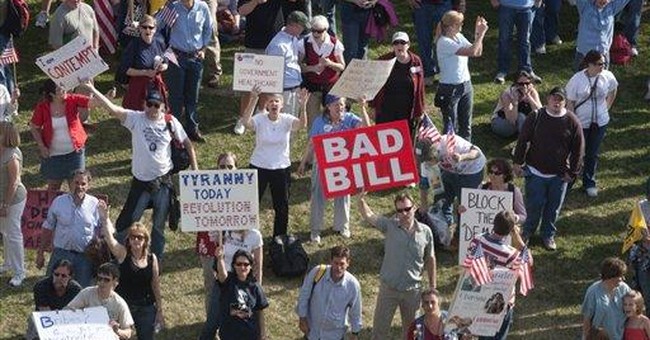 Apparently there's a self-proclaimed militia leader named Mike Vanderboegh who runs an obscure, low-traffic blog out of Pinson, Ala. (population 5,007). Mr. Vanderboegh recently called on his fellow "sons of liberty" to break the windows of Democrats to protest health-care reform.

Let's start with the obvious: Vanderboegh is an idiot, and anyone who followed his advice is an idiot, too. These people are buffoons, not just because such tactics help Democrats but because such behavior is simply wrong, reprehensible and clownish.

Equally wrong, reprehensible and clownish: the reaction to Vanderboegh and his alleged ilk.

The Daily Beast's John Avlon insists that Vanderboegh's rallying cry, combined with some threats and broken windows, make "the parallels, intentional or not, to the Nazis' heinous 1938 Kristallnacht ... hard to ignore."

Actually, it's really, really easy to ignore the parallels. During Kristallnacht, Nazi goons destroyed not just 7,000 store windows but hundreds of synagogues and thousands of homes. Tens of thousands of Jews were hauled off to concentration camps by the Nazis, who had been in total power for half a decade.

This combination of state power and murderous, genocidal intent is nowhere on display in America today, not in the Obama administration (contrary to what some overheated right-wingers claim) and certainly not among out-of-power conservatives and "tea partiers." It's amazing anyone needs to point this out, but a few fringe libertarians throwing bricks to beat back an expansion of government is not the same thing as the tightening fist of the National Socialist Third Reich. Indeed, it's an anti-American slander to suggest anything like it is going on here, and it cheapens the moral horror of the Holocaust.

Don't tell that to the Democrats and their media transmission belt, who largely turned a blind eye to partisan vandalism and extremist rhetoric against Republicans for eight years but now express horror at what they claim to hear from the right.

Columnist Paul Krugman, who encouraged liberals to hang Sen. Joe Lieberman (I-Conn.) in effigy, is concerned about right-wing "eliminationist rhetoric." The Washington Post's Courtland Milloy can't stand the incivility of the tea partiers, which is why he wants to "knock every racist and homophobic tooth out of their Cro-Magnon heads." Frank Rich says the mantra "take our country back" is now code for a white racist backlash -- though it was an apparently fine Democratic applause line when George W. Bush was president.

So what's the evidence for this new reign of terror? Those broken windows, some nasty voice and e-mail messages (not counting those aimed at Republicans, naturally), a coffin "left" at a Missouri congressman's home, a few repugnant signs at rallies, and allegations from Reps. Emanuel Cleaver II (D-Mo.) and John Lewis (D-Ga.) that they were spit on and insulted with the "N-word," respectively.

But wait. The coffin was part of a protest over the death of "our freedoms" and was toted by the protesters, not left anywhere. And videos make it clear that what Cleaver called spitting was a protester spraying too much saliva while talking, the racist pig.

As for the epithet aimed at Lewis, if it happened, it's disgusting. But going by the video, there's nothing to back it up, and the claim by Rep. Andre Carson (D-Ind.) that the N-word was chanted 15 times is pure dishonesty.

Let's assume it is true. I thought liberals rejected guilt by association as McCarthyism. Or are we to believe that every opponent of ObamaCare is a racist?

On March 3, Politico broke a story about a leaked PowerPoint presentation delivered at a GOP retreat in Florida. It laid out, in cartoonish terms, a fundraising strategy exploiting "fear" of President Obama's "socialist" agenda. Ranking Republicans immediately condemned and repudiated the presentation.

Now, Obama's political arm, Organizing for America, is fundraising based on fear, sending out e-mails insinuating that Republicans are unleashing a lynch mob to repeal ObamaCare. Rep. Chris Van Hollen (D-Md.), chairman of the Democrats' Congressional Campaign Committee, insists we all should be very scared.

Heaven forbid anyone suggest a coordinated strategy is at work here. That would be distracting us from the Kristallnacht unfolding before our eyes.