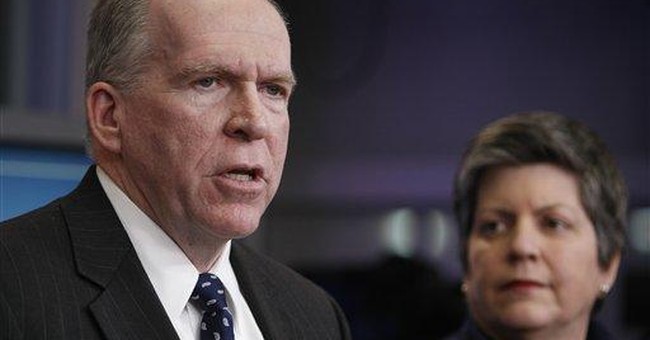 "Politics should never get in the way of national security," wrote John Brennan, the White House's shockingly political deputy national security advisor. His USA Today Op-Ed article last week set off a firestorm inside the Beltway by essentially accusing critics of administration policy of deliberately lying -- "misrepresenting the facts to score political points, instead of coming together to keep us safe" -- and aiding and abetting al-Qaeda: "Politically motivated criticism and unfounded fear-mongering only serve the goals of al-Qaeda."

Partisan attacks are the democratic equivalent of a market signal to those in power. Most businessmen hate competition, but the most successful businesses learn from what the market tells them. Competitors expose vulnerabilities in your product line and deficiencies in your sales pitch. The unhealthiest firms are those that have gone the longest without serious competition. It's the same in nearly every field of human endeavor. In a democracy, the hope is that serious arguments will win out over frivolous ones. The only way for that to happen is to have the arguments.

For the record, I basically agree with Brennan's critics. The Obama administration's explanations for how it's treated the suspect in the attempted Christmas Day bombing and how it dealt with the civilian trial for Khalid Shaikh Mohammed and other al-Qaeda terrorists have been incoherent and amateurish. Also, Brennan's talking-point hackery, even to denounce alleged talking-point hackery, is bad form for a high-ranking national security official. It leaves the impression that the guy running the antiterrorism effort is a political operative first and terrorism-fighter second.

But let's take those talking points at face value. Who says politics should never interfere with national security? Politics is the means by which we define acceptable trade-offs. How else but through politics are we to hash out everything from waterboarding to wiretapping?

Let's assume Brennan's right about President Obama's critics -- that, for political reasons, they're distorting the facts of how the Christmas Day suspect was handled. Would that help al-Qaeda? That would depend on what direction the critics are pushing the administration, wouldn't it? In this case, critics are demanding more diligence and hawkishness against al-Qaeda. That helps our enemies?

And lying in itself isn't aid and comfort to the enemy. John F. Kennedy successfully misrepresented the facts about the "missile gap" in 1960, in a hawkish direction. But I'm not sure it helped the Soviets.

I'm not defending lying -- and Brennan offers no good evidence on that score. I'm just trying to unpack his argument. As with his boss, it seems Brennan's real objection is to inconvenient criticism, and he's willing to use any rhetorical weapon near to hand to delegitimize it.

That's why he suggests criticism is driven by partisanship. But, again, partisanship is one of the necessary antibodies of a healthy democracy.

No one likes partisan asininity, never mind dishonesty, but politics are supposed to be messy. In Federalist 51, James Madison famously wrote about how "ambition must be made to counteract ambition." That's what "playing politics" usually amounts to. Like the seeming chaos of the market, the hurly-burly of politics is how we sort things out. The result is often healthier than the process would suggest.

As the Washington Post's Fred Hiatt recently noted, partisanship defined the debate over port security during the Bush years. Democrats in Congress harped on the Bush "failure" to achieve the impossible goal of inspecting every cargo container. Now that Obama has adopted the Bush policy, the same voices are cheering.

The hypocrisy might be annoying, but the Democrats' anti-Bush partisanship also called attention to an important issue. The real danger now is that Democrats will abdicate diligent oversight out of partisan loyalty, while Republicans will ignore the issue out of fear of seeming hypocritical.

Every White House is prone to group-think. So it's no wonder that this administration has the tendency to dismiss criticism as illegitimate, partisan and even dangerous. The Bush White House certainly dabbled in this sort of thing on the grounds that there was a war on. Democrats used to take great offense, which is why they insisted dissent was the highest form of patriotism. Brennan's tantrum reveals that that talking point is a dead letter.

But I'm less concerned about that than I am about Obama's faith in something called "post-partisan politics." Politics without partisanship isn't politics. And democracy without politics isn't democracy.