The Dawn of a New Era in Infotainment 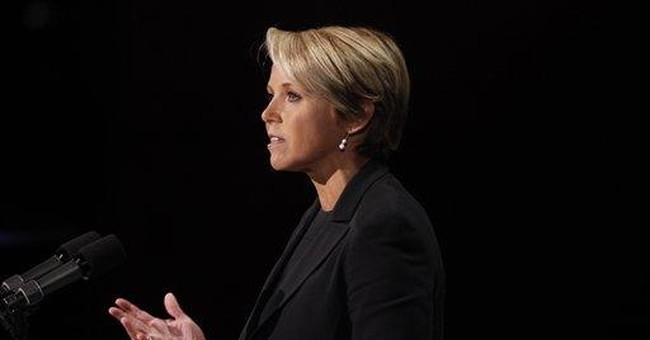 "After reviewing hundreds of hours of 'Shark Week' footage and consulting with leading ichthyologists, CBS News can now confirm that the so-called 'Land Shark' made famous on 'Saturday Night Live' is a hoax," Katie Couric assured viewers. Meanwhile, over on MSNBC, the crack news team continued its in-depth exposé on "SNL's" faked assassination of the Little Rascals' Buckwheat. Sleuths working for The New York Times revealed that not only was John Belushi not an Olympic decathlete, but his touted regimen of cigarettes and "little chocolate donuts" was, according to experts in sports medicine, "not even remotely nutritious."

Meanwhile, a report by "60 Minutes" correspondent Steve Kroft that the physics of "SpongeBob SquarePants" "make no sense at all" has left elementary schools and day-care centers dealing with a huge spike in "acting out" by devastated viewers.

These are just highlights from the fact-checking frenzy overtaking the news media in the wake of CNN's report on Oct. 5 that a parody mocking President Barack Obama wasn't entirely accurate.

OK, OK. I'm just having fun at CNN's expense, as were a lot of people this week, because the network really did take it upon itself to defend Obama from "allegations" leveled in a "Saturday Night Live" skit. The show opened with a fake (duh) address from Obama, played by Fred Armisen. "When you look at my record, it's very clear what I have done so far. And that is nothing," he said. "Almost one year and nothing to show for it. You don't believe me? You think I'm making it up? Take a look at this checklist." The pretend Obama then goes through a more-than-accurate-enough checklist of things Obama hasn't accomplished (closing Guantanamo Bay, etc.).

CNN seemed aghast. Wolf Blitzer, host of CNN's "Situation Room," asked, "How much truth is behind all the laughs? Stand by for our reality check."

"They essentially cast the leader of the free world as a do-nothing president," Blitzer explained. "Even though 'SNL' deals in comedy, what they said about the president rings true for a lot of you, apparently. So, did the show accurately capture a mood, or did it go off track for comedic effect? Let's bring in CNN's Kareen Wynter. She's checking the facts for us. All right, Kareen, what are you finding out?"

From there, Wynter "reported" her findings (with the help of a "study" from the St. Petersburg Times' PolitiFact unit) as if the 'SNL' skit was an RNC attack ad.

"Hi there, Wolf," perked Wynter. "Well, some observers say, sure, we are just talking comedy here, but that, on many points, well, 'SNL' couldn't have been more off the mark."

Almost as annoying as the report's premise is how tendentious it was. Quoting PolitiFact's Bill Adair, Wynter explained, "As for health care, Adair says 'SNL' also got it wrong, since that legislation is still stalled in Congress."

Huh? When presidents promise to get something done but then can't get it through Congress (never mind a Congress run by the same party), it's routine to say that the president hasn't gotten it done. Not so, says CNN, which I guess means George W. Bush never failed to enact Social Security reform.

Such Gunga Din-like water-carrying for Obama would be unseemly if the 'SNL' skit had been a political attack ad. But, again, it wasn't.

And you don't have to be Bush or Sarah Palin to be annoyed by the fact that CNN never thought it necessary to fact-check 'SNL' when it attacked other politicians. Just ask Bill Clinton or Jimmy Carter. (This just in: Apparently it's not true that Carter was transformed into a 90-foot-tall behemoth in a nuclear power plant mishap involving some spilled Pepsi.)

Still, there might be something more serious involved here. For good or ill, Jon Stewart's "Daily Show" and Stephen Colbert's "Colbert Report" have an ever-increasing influence on political debate. Meanwhile, cable news has been evolving ever more rapidly into infotainment. CNN even hired alleged comedian D.L. Hughley to host a show. Fox News' legitimately funny "Red Eye" is becoming a ratings sensation.

Considering the evolving -- or, rather, devolving -- standards of the legacy media in the wake of Dan Rather's self-immolation, maybe CNN is just ahead of the curve? After all, if it's OK for the press to report something that is "fake but accurate," why should "SNL" escape notice when it does the same thing?

That's something to noodle on. In the meantime, I have to get back to my stunning exposé on a public school system that has allowed a fellow named Bart Simpson to stay in the fourth grade for more than two decades.