We Need a Bigger House 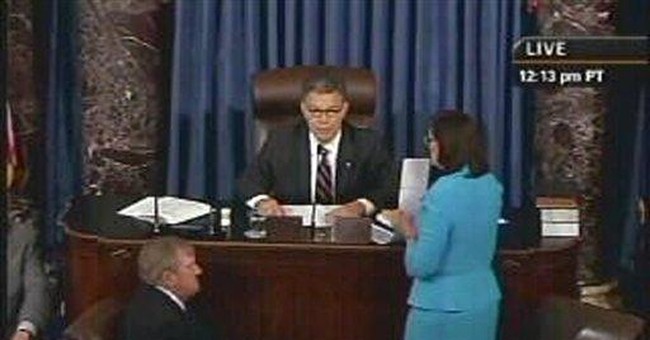 Watching the House of Representatives on late-night C-SPAN, you might have any number of reactions, including seppuku-inducing boredom. Depending on who's talking, you might also feel disgust, rage, contempt or, in rare cases, inspiration. But one reaction you probably won't have is: "Gosh, if only there were more of these jokers."

That's too bad. Because what our political system may be lacking more than anything else is enough members of Congress. No, really. Seriously, stop laughing.

Except for a brief effort to accommodate Alaska and Hawaii, the size of the House has been frozen at 435 members since 1911. A 1929 law, driven in part to keep immigrants underrepresented, has kept it that way.

But there's nothing sacred about the 435 number. In fact, the Founders would be aghast at the idea that the "peoples' house" is filled with pols speaking for hundreds of thousands of citizens.

In Federalist No. 55, James Madison defended the proposed Constitution's apportionment clause despite its widespread unpopularity. The chief complaints, according to Madison, were that such a small Congress would become an "unsafe depository of the public interests"; that the districts would be too large and diverse for any politician to "possess a proper knowledge of the local circumstances of their numerous constituents"; and that such a tiny House would have the net result of attracting elitist types whose aim would be the "permanent elevation of the few on the depression of the many."

So how big were these liberty-threatening districts? How tiny was the potentially oligarchic House? The districts had no more than 30,000 people, yielding 65 representatives. Under today's apportionment system, the "ideal" congressional district is 700,000 people, with some districts reaching nearly 1 million. Montana, with a population of 958,000, has just one representative, but each of Rhode Island's two districts has about 530,000 people.

There is, of course, an important principle here, and if all of Montana's residents were black, it would be easier for everyone to see it. Montanans' votes don't count as much as Rhode Islanders' -- in fact, a Montanan's vote only counts for about three-fifths of a Rhode Islander's. That America's slave population was counted by the same ratio under the original Constitution is usually cited, rightly, as one of the document's greatest sins. A lawsuit filed in federal court in Mississippi last month hopes to force Congress to remedy the status quo's assault on the one-person, one-vote principle by increasing Congress to as many as a paltry 1,761 members.

Beyond principle, there are practical reasons to expand Congress. For decades, presidential candidates have promised to change the "way Washington works." But once elected, they're soon captured by their own congressional parties, which are in turn beholden to the "old bulls" and constituencies rooted in interests outside their districts.

A Congress of, say, 5,000 citizen-legislators would change that overnight. Would it cost more money? Yes. But today's huge staffs could be cut, and perks and pork might even be curtailed by using the old chewing gum rule: If there's not enough for everyone, nobody can have any.

In free-speech debates, it's often said that the cure for bad speech is more speech. Well, the cure for a calcified Congress just might be more members; the remedy for an undemocratic system, more democracy.

When you look at the congressional corruption scandals of the last 20 years, it's hard not to see them as stemming from a system that has, in fact, led to the "permanent elevation of the few on the depression of the many."

Critics of the status quo from the left and right yearn to shatter the two-party system's lock on politics. I'm not convinced that would be a good thing, but wouldn't the best way to do that be for smaller parties in Congress to champion fresh new ideas? Rather than have some billionaire egomaniac who, in effect, creates or co-opts a ridiculous third party just so he can indulge his presidential ambitions, why not have third, fourth or 15th parties test their wares in a smaller political market and build themselves up to where they could field a president?

Obviously, the rajahs of incumbentstan don't like the prospect of diluting their own power. But expanding Congress would, among other things, make late night C-SPAN so much more entertaining.