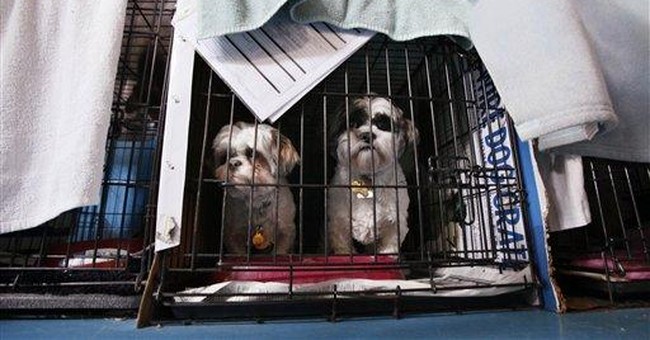 Harry Truman famously said of D.C.: "If you want a friend in Washington, get a dog." It turns out that Truman was wrong, at least if you go by the experts.

I'm not talking about Washington, but of dogs. And I'm not referring to the First Dog, Bo, who has received a ton of attention that should have gone to a shelter dog as the president promised. No, this is about dogs as dogs.

As traditional arrangements dissolve in the heat of the present age, or perhaps just under the hot studio lights of "Oprah," we are constantly told that there are many "kinds of love." Actually, this isn't a new insight. But we can leave that -- and the debate over this observation's meaning and utility -- for another day. What rankles is not where the line is being extended but where it is being withdrawn.

Until the day before yesterday, figuratively speaking, everyone understood that among the most honorable expressions of love -- a kind of love -- is the relationship between man and dog. Canines were lovers of learning for being able to distinguish friend from foe, according to Plato. Sigmund Freud observed that "dogs love their friends and bite their enemies, quite unlike people, who are incapable of pure love and always have to mix love and hate."

Charles Darwin, a true secular saint of the modern age if ever there was one, loved dogs unreservedly. And, in "The Descent of Man," he marveled at the ability of dogs to love back. He noted how even "in the agony of death, a dog has been known to caress his master."

But even Darwin was a sucker, apparently. Eric Zorn, a writer for the Chicago Tribune, recently mocked a local woman, Jess Craigie, who dove into near-freezing waters to save her dog from drowning. Zorn wrote, "Note to Jess Craigie: Your dog still doesn't love you."

Zorn's source for this dog slander is Jon Katz, who despite his name has written mostly wonderful stuff about dogs. Zorn uses an unfortunate quote from Katz to peddle the fashionable notion that dogs are, in the words of science writer Stephen Budiansky and others, "social parasites." According to this theory, canines are evolutionary grifters that have fooled humans into believing they are our friends. "Dogs develop very strong, instinctive attachments to the people who feed and care for them," Katz told Zorn. "Over 15,000 years of domestication, they've learned to trick us into thinking that they love us." (In his book "Soul of a Dog," Katz is far more nuanced about the nature of canine affection, suggesting a quid pro quo of food for love. Here, Katz is out of the bag.)

Look, few would dispute that dogs are complicated creatures with internal lives that fall far short of humanlike consciousness or self-awareness. And anyone who's spent more than five minutes with dogs knows their priorities and our own differ dramatically. That's part of the magic of doggy goodness. Dogs don't care whether you're rich or famous or popular. They care about you. Or, in the case of my dog, Cosmo (a shelter dog), he cares about me and about maintaining an orderly and secure perimeter on our block, as free of mail carriers, squirrels, raccoons, foxes, cheetahs and wildebeests as possible. His biggest successes have been with the cheetahs and wildebeests -- so far.

Here's the question reductionists like Zorn don't answer: Why does canine affection have to be a trick or a con? After all, according to the very same logic, I love my wife and daughter because I have strong instinctive attachments for them grounded in my genes. But even if the genetic explanation is absolutely true, it doesn't change the fact that I love my family.

Why should it be different with dogs? It's not as if dogs have a Terminator-like computer screen inside their heads that says "run fake-love subroutine now" when their masters come home from work. Dogs don't pose in front of the mirror practicing their tail-wags like lines from a script so they can make it convincing. If it is true of any living thing, it is true of dogs: They are what they are. A happy dog can no more be faking his joy than a hungry lion could be faking his appetite.

Do we really want to live in a society in which love is a genetically mandated confidence game? Where will that argument take us?

Indeed, if embracing modernity means I have to accept such unlovely idiocy, count me out. I'll be elsewhere. If you need me, just follow the sound of the barking.

Liberals Are Really Going to Hate Ron DeSantis Over Florida's Latest COVID Benchmark
Townhall
UPDATE: The FDA and CDC will 'call for an immediate pause in use of Johnson & Johnson's single-dose coronavirus vaccine'
Twitchy
Jen Psaki Stumbles Upon the Truth After Asked if Biden Admin Is Contributing to Vaccine Hesitancy
Redstate
The Morning Briefing: U.S.May Want to Look Into Getting Rid of Minnesota
PJ Media