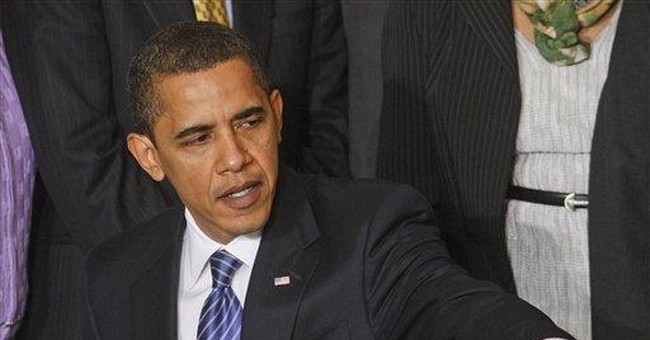 Imagine a child falls down a well. Now imagine I offer to lend the parents my ladder to save her, but only if they promise to paint my house. Would you applaud me for not letting a crisis go to waste? Or would you think I'm a jerk, for want of a harsher word not printable in this space?

I ask because I'm trying to come to terms with Rule No. 1 of the Obama administration.

"Rule 1: Never allow a crisis to go to waste," White House Chief of Staff Rahm Emanuel told the New York Times right after the election. "They are opportunities to do big things." Over the weekend, Secretary of State Hillary Rodham Clinton told an audience at the European Parliament, "Never waste a good crisis." Then President Obama explained in his Saturday radio and Internet address that there is "great opportunity in the midst of" the "great crisis" befalling America.

Numerous commentators, including me, have pointed to this never-waste-a-crisis mantra as ideological evidence that Obama's budget priorities are a great bait-and-switch. He says he wants to fix the financial crisis, but he's focusing on selling his long-standing liberal agenda on health care, energy and education as the way to do it, even though his proposals have absolutely nothing to do with addressing the housing and toxic-debt problems that are the direct causes of our predicament. Indeed, some -- particularly on Wall Street -- would argue that his policies are making the crisis worse.

But those policies aren't the real scandal, even though they're bad enough. The real scandal is that this administration thinks crises are opportunities for governmental power-grabs. (It seems writer Randolph Bourne was wrong. It is not war, but crisis, that is the health of the state.)

Michael Kinsley famously said that a gaffe in Washington is when a politician accidentally tells the truth. As they say, it's funny because it's true.

But the White House tactic isn't funny at all. It's scary. Its amorality is outweighed only by the grotesque and astoundingly naked cynicism of it all.

Recall that not long ago, the first item on the bill of indictment against the Bush administration was that it was "exploiting" 9/11 to enact its agenda. Al Gore shrieked that President Bush "played on our fears" to get his way. In response to nearly every Bush initiative, from the Patriot Act to the toppling of Saddam Hussein, critics would caterwaul that Bush was taking advantage of the country's fear of terrorism.

The Bush administration always denied this, and rightly so. If the president admitted that he was using a national calamity for narrow partisan or ideological advantage, it would be outrageous. Indeed, every time Karl Rove or some other administration official said anything that could be even remotely interpreted as using the war or 9/11 for partisan or ideological gain, the editorial pages and Democratic news-release factories churned into overdrive with righteous indignation.

Well, now we have the president, along with his chief aides, admitting -- boasting! -- that they want to exploit a national emergency to further their pre-existing agenda, and there's no scandal. No one even calls it a gaffe. No, they call it leadership.

It's not leadership. It's fear-mongering.

In other realms of life, exploiting a crisis for your own purposes is an outrage. If a business uses a hurricane warning to price-gouge on vital supplies, it is a crime. When a liberal administration does it, it's taking advantage of a historic opportunity.

Obama's defenders respond to this argument by stating that the president's motives are decent, noble and pure. He wants to help the uninsured and the poorly educated. He wants to make good on his vow to halt those rising oceans.

But this is just a rationalization. Every president thinks his agenda is what's best for the country; every politician believes his motives are noble. The point is that scaring people about X in order to achieve Y is fundamentally undemocratic.

This was transparently obvious to Bush's harshest critics, who alleged that 9/11 was merely a convenient crisis for devious neocons who wanted to topple Hussein all along. But it's now clear that many of these critics simply objected to the agenda, not the alleged tactics. Now that it's their turn, they see nothing wrong with doing what they so recently condemned.

They even admit it, over and over again.