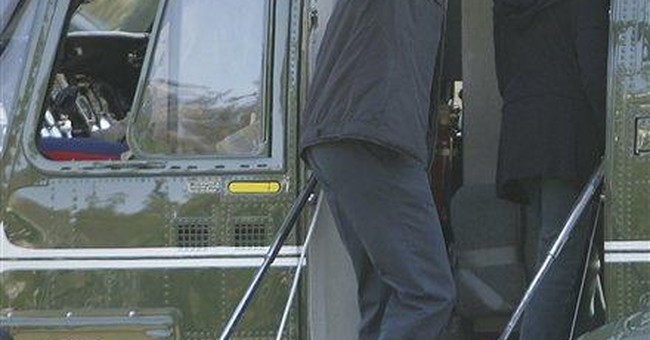 Barack Obama and his supporters have been relentlessly comparing the new president to Franklin Roosevelt. At least one similarity is shockingly accurate: They were both beneficiaries of an obsequious press corps.

In part because the feeling was mutual, the reporters hated FDR's Republican predecessor, Herbert Hoover. The new Democratic president, however, left White House correspondents "jubilant," in one historian's words. Indeed, they were so charmed by his first news conference, reporters literally burst into applause when he was done. One grizzled newspaperman observed that "the press barely restrained its 'whoopees.'"

There've been no standing ovations -- yet -- with Obama, but there's no denying that many in the news media are clapping on the inside. Obviously, not everyone is swooning, as the news media aren't a monolith. And, yes, President Obama deserves his honeymoon. But honeymoons suggest a respectful partnership of equals. What we're seeing here is more like a gaggle of aging love-struck groupies following Jon Bon Jovi around.

Though no one's idea of an objective reporter, MSNBC's Chris Matthews does express the euphoria nicely. On "The Tonight Show," he told Jay Leno that the Obamas "are really cool. They are Jack and Jackie Kennedy when you see them together. They are cool. And they're great looking, and they're cool and they're young, and they're -- everything seems to be great. I know I'm selling them now. I'm not supposed to sell, OK? ... But the fact is, I wouldn't be an honest reporter if I didn't tell you what the spiritual experience is like of being in a Barack Obama rally."

On Inauguration Day, Matthews came a hair's breadth from shrieking like a teenage girl at the Beatles' debut on "The Ed Sullivan Show." As is often the case with crushes, what Matthews seems to like best about Obama is how he makes Matthews feel about himself -- and his network. "This is the network that has opened its heart to change, to change and its possibilities," Matthews gushed.

One of the great tests of news media bias is when the storyline has become unfalsifiable. With George W. Bush, no matter what he did, the facts always seemed to prove he was to blame. With Obama, no matter what he does, he's always the hero. For instance, during a trip to China in 2005, then-President Bush tried to open a locked door while leaving a news conference, and the press tittered at his buffoonery. Yet the other week, when Obama walked into an Oval Office window that he thought was a door, much of the news media looked the other way -- perhaps recognizing his genius at spotting where a door should have been.

Bush's love of exercise was analyzed as a troubling obsession of an out-of-touch president. Obama's fixation with physical fitness gives numerous reporters hope that he will alleviate America's obesity epidemic. In a front-page exclusive, The Washington Post revealed that on Obama's recent vacation, the Hawaiian "sun glinted off (his) chiseled pectorals sculpted during four weightlifting sessions each week, and a body toned by regular treadmill runs and basketball games."

A more serious example can be found in some of the news coverage of the stimulus bill. Obama made it his top priority to get bipartisan support for his unprecedented spending bill. The president exerted enormous personal effort to sway House Republicans to his cause but failed to win a single GOP vote, and he even lost 11 Democrats. And yet the Post reported in another front-page article that the Democratic House's passage of the bill -- which was always assured -- "marked a big victory for his presidency a little more than a week into his term." Indeed, it's hard to see how anything short of a crushing defeat would be described as anything other than a "big victory."

Then there's Obama's inaugural address, which was panned as pedestrian by pretty much everyone who hasn't drunk the Kool-Aid and was received as the greatest oration since Henry V rallied the British at Agincourt by everyone else. Leave it to New York magazine's political reporter, John Heilemann, to square the circle. He conceded that Obama's speech failed to deliver the goods, inspirationwise. But, don't ya see, he meant to do that. In a piece titled, "Obama's Spare Inaugural Rhetoric Signals Strategic Mastery," Heilemann explained that the speech was "less than thrilling in itself, perhaps by design."

Since the inauguration, it seems every day brings another article about "Day 3" or "Day 7" or "Day 12.5" of the Obama presidency. And each one reads like a People magazine blog about "American Idol." Everything he does signals hope for peace in the Middle East or race relations or the economy or whatever.

CNN's John King recently said "nobody disputes" that journalists are too enraptured by Obama's historic presidency; he seems to think it will wear off when the serious work of the nation kicks in.

History is not so reassuring. "You are still the most interesting person," newspaper editor William Allen White told FDR at the end of his second term. "For box office attraction you leave Clark Gable gasping for breath."