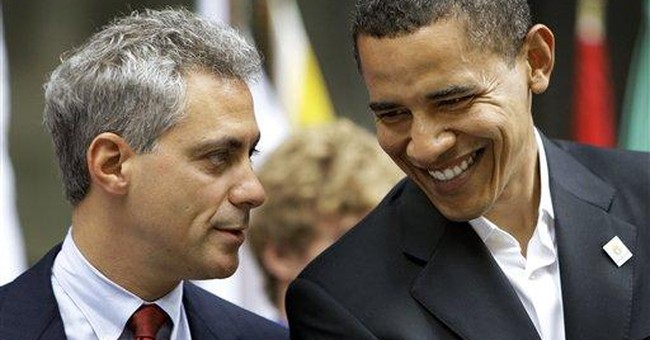 Behold the cultural contradictions of progressivism.

Barack Obama's victory was a huge win for self-described progressives. Arguably the most liberal presidential nominee in American history, Obama has given some very old ideas an aura of new coolness. Congrats on all that. Hope it works out for you.

But something interesting happened on Election Day that didn't get much attention. Bans on gay marriage were on ballots in several states, and they all won. In fact, gay marriage bans have ultimately passed in all 30 of the states in which they were on the ballot.

The ban in California was particularly intriguing. Proposition 8 would have failed in the Golden State if it were up to white voters, who opposed it by a 51-49 ratio. What carried it over the top was enormous support from black voters, with about 70 percent of them backing it. Hispanics also supported the ban by significant, though smaller, margins. In Florida, where a similar ban required a 60 percent margin, Amendment 2 just barely passed, getting 60 percent of the white vote. The cushion came from blacks, who voted 71 percent in favor, and Latinos, who voted 64 percent in favor.

In other words, Obama had some major un-progressive coattails. The tidal wave of black and Hispanic voters who came out to support Obama voted in enormous numbers against what most white liberals consider to be the foremost civil rights issue of the day.

Put aside the substance of the gay marriage debate; what's fascinating is how these returns expose the underlying weakness, or at least vulnerability, of progressivism.

As a matter of practical politics, contemporary liberalism amounts to a coalitional ideology, while conservatism remains an ideological coalition. The Democratic Party is the party of various groups promising to scratch each other's backs. Gay rights activists and longshoreman coexist in the same party because they promise support on each other's issues.

The Republican Party is different. It says to voters, if you believe seven, eight or even 10 out of the 10 things we believe, you should be a Republican. Obviously, there are coalitions on the right and ideologues on the left, but I think the generalization remains valid.

But sometimes a tactical orientation can be confused for an ideological principle. That's why the left places such high value on unity, solidarity and a no-enemies-on-the-left mentality. That's why Obama preached endlessly about unity and the evils of being "divisive" or "distracted" from what really matters.

Another example of a tactic masquerading as a principle is contemporary liberalism's fixation with the idea that the working and middle class should "vote their interests," by which they mean vote for the most government goodies. This was the point of Obama's "bitter" and "clinging" comments last summer. Those poor deluded souls in western Pennsylvania don't understand that their real interests lie with Obama's economic agenda.

For all the liberal protests claiming that Obama's "bitter" comments were misunderstood, his remarks were, in fact, mainstream on the left. For instance, Thomas Frank, something of a guru to angry liberals, wrote in his book "What's the Matter with Kansas?" that, "People getting their fundamental interests wrong is what American political life is all about. This species of derangement is the bedrock of our civic order; it is the foundation on which all else rests." And, he added at great length, it is the reason so many deluded working- and middle-class Americans vote Republican (or at least why so many did when Frank wrote his book).

This has always struck me as hypocritical, pernicious lunacy. Legitimate election issues are those issues voters decide are legitimate. Americans who cling to religion and guns don't do so out of bitterness, but because they consider such things central to their understanding of the good life and resent what they perceive as hostility to their lifestyle from their own government. And no liberal opposes voting on values issues -- including gay rights -- when they think they're right or if they believe it helps get liberals elected. Liberals denounce rich people who vote their interests as "greedy" and celebrate limousine liberals who vote against their own interests as heroes. And at least some of the folks who voted for Obama did so not because of their pocketbooks, but because of the symbolism inherent to Obama's candidacy.

Regardless, Obama clearly succeeded in convincing enough Americans that a vote for him was in their interest. But he was incapable of convincing even his biggest supporters to vote their interests as he defined them and nothing else. That's because Americans are defined by more than their paychecks, a fact I expect Barack Obama will come to appreciate more and more in the days ahead.