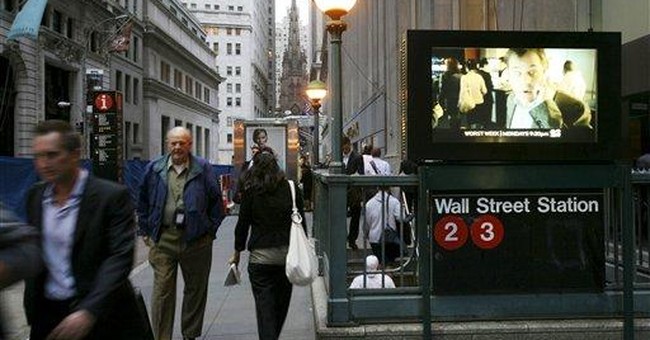 A very old story is once again being retold, with a few of the characters' names updated to besmirch the innocent. In this story, conservatives are to blame for an economic crisis because they allegedly believe there is no role for government in the economy, and all economic crises are due to lax regulation of markets.

Cokie Roberts recently gave a sense of how old this story is on ABC's "This Week." She said of John McCain, "He's a Republican, and whenever Republicans get into this kind of mess, everybody, even people who were not born or close to being born, the specter of Herbert Hoover comes out to haunt them."

Roberts is correct in one sense. The specter of Herbert Hoover is conjured every time there's an economic calamity, large or small.

But you know what? Specters are ghosts. And ghosts aren't real.

The Herbert Hoover of popular imagination was a laissez-faire lickspittle of Adam Smith. But this idea began as Rooseveltian propaganda and endures as the creation myth of modern liberalism.

William Leuchtenburg, possibly the greatest authority on the FDR era, wrote some time ago, "Almost every historian now recognizes that the image of Hoover as a 'do-nothing' president is inaccurate."

After the stock market crash of 1929, Hoover browbeat business leaders to keep wages and prices high. He invested heavily in public works projects. He pushed for an international moratorium on debts. He created the Reconstruction Finance Corporation, which later became a home for many of FDR's Brain Trusters. Hoover increased farm subsidies enormously.

Some of Hoover's interventions were good but ineffectual. A few were very, very bad and very effective.

In 1932, Hoover in effect repealed Calvin Coolidge's tax cuts, increasing the rates for the poorest taxpayers by more than 100 percent and hiking the top rate from 25 percent to 63 percent. Worse, contrary to his own better instincts, Hoover signed the disastrous Smoot-Hawley trade bill that raised protectionist walls at precisely the moment the world needed trade the most.

Then there's this idea that FDR rode to the rescue, saving the day by untying the American people from the railroad tracks of runaway capitalism. Former Clinton Treasury Secretary Lawrence Summers, now a surrogate for Barack Obama, recently said on NPR: "It's very tempting to always think that the government should just stand back and let the private sector sort these problems out. That's the kind of thinking that made the Depression ŒGreat.'"

Summers should know better (in fact, I'm sure he does). The Great Depression was not made "Great" by government inaction. Indeed, FDR's New Deal may have been wonderful in some mytho-poetic sense, and maybe some of its reforms can be defended in some broader context, but as an effort to end the Great Depression, the New Deal was a failure. As my colleague Mark Steyn writes, "Lots of other places - from Britain to Australia - took a hit in 1929 but, alas, they lacked an FDR to keep it going till the end of the Thirties. That's why in other countries they refer to it as "the Depression," but only in the U.S. is it 'Great.'"

"Phil Gramm, one of the architects of the deregulation in Washington that led directly to this mess on Wall Street, is also the architect of John McCain's economic plan," Obama said recently. A couple problems: Gramm is no longer with the McCain campaign. More important: This is nonsense on stilts. The deregulation that the Obama camp most often cites is the Gramm-Leach-Bliley Act, which passed the Senate in 1999 by a 90-8 margin and was signed enthusiastically by Bill Clinton. Thirty-eight Democrats voted for it, including Chuck Schumer, John Kerry, Chris Dodd, John Edwards, Dick Durbin, Tom Daschle and Barack Obama's running mate, Joe Biden. The "Leach" in the legislation's title was a founder of Republicans for Obama.

Moreover, nothing in that law has much to do with today's financial meltdown. Indeed, it has helped some financial institutions weather the storm precisely because they are more diversified.

Also, who are the real Hoovers here? Obama is sympathetic to protectionism, as is his party. He says he will raise taxes on the top income earners, and if he's remotely honest about his spending ambitions, he will have to raise taxes on everybody else as well.

Meanwhile, who sought to intervene when Fannie Mae metastasized? John McCain. Who wanted to keep the party going? The party of Roosevelt. There's blame all around, but nothing today supports the liberal ghost stories of yesterday.