John Stossel
|
Posted: Aug 14, 2019 12:01 AM
Share   Tweet
The opinions expressed by columnists are their own and do not necessarily represent the views of Townhall.com. 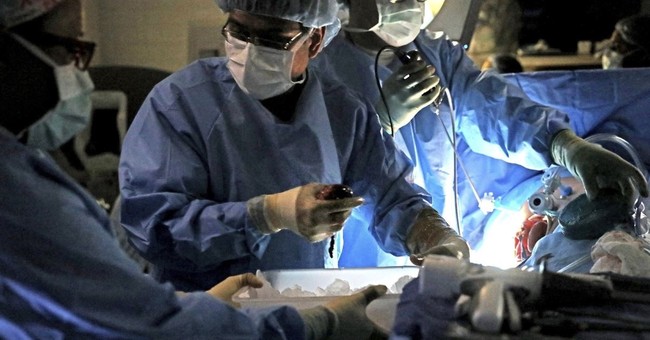 Have you volunteered to be an organ donor? I did.

I just clicked the box on the government form that asks if, once I die, I'm willing to donate my organs to someone who needs them.

Why not? Lots of people need kidneys, livers, etc. When I'm dead, I sure won't need mine.

Still, there are not enough donors. So, more than 100,000 Americans are on a waiting list for kidneys. Taking care of them is so expensive, it consumes almost 3% of the federal budget!

So why not allow Americans to sell an organ?

People already legally sell blood, plasma, sperm, eggs and bone marrow. Why not a kidney? People have two. We can live a full life with just one.

If the U.S. allowed people to sell, the waiting list for kidneys would soon disappear.

"Poor people are going to be hurt," replies philosophy professor Samuel Kerstein in my latest video. Kerstein advised the World Health Organization, which supports the near universal laws that ban selling organs.

"Body parts to be put into Americans will come from poor countries," warns Kerstein. "I don't want to see poor people in Pakistan having their lives truncated."

People have free will. Poor people are just as capable of deciding what's best for them as rich people. Who are you, I asked Kerstein, to tell people they may not?

"We are people who care about people who are different from us," he replied, "and poorer than we are. That's why we care."

These are "vacuous moralisms," replies Lloyd Cohen, an attorney who's long argued against the ban on organ-selling.

He's right, of course, except that today some donors do get paid. Whenever foolish governments ban things that many people want, black markets appear.

Some people go overseas and buy organs from shady middlemen. Some make secret deals in America.

The process would be much safer, and prices lower, if buying and selling were legal.

He calls the warnings that "the weak and poor will be exploited" paternalistic.

"We heard the same argument with surrogacy," he points out. "Then you interview the women. (They say) this is a wonderful thing that they can do. And they get paid!"

Oddly, the one country that allows the selling of organs is Iran. The government buys organs from people willing to sell. I don't trust statistics from Iran, but a PBS report claims legalization has dramatically reduced the waiting time for a kidney.

Twenty-four years ago, Cohen went on "60 Minutes" to argue for legalization of organ sales. At the time, he joined the debate simply because he strongly felt the ban was unjust. But now Cohen has learned that his own kidneys are failing. He needs a transplant.

He won't break the law and turn to the black market. He hopes to get a kidney though a group called MatchingDonors that pairs altruistic volunteers with people who need organs. Remarkably, a woman volunteered to give Cohen one of her kidneys. She's now being tested to see if she is a match for him.

If not, Cohen will be back on the waiting list with 102,914 other Americans. Most will die, waiting.

"Organs that could restore people to health and extend life are instead being buried and burned," sighs Cohen.

All because timid governments would rather suppress commerce than give patients a market-based new shot at life.