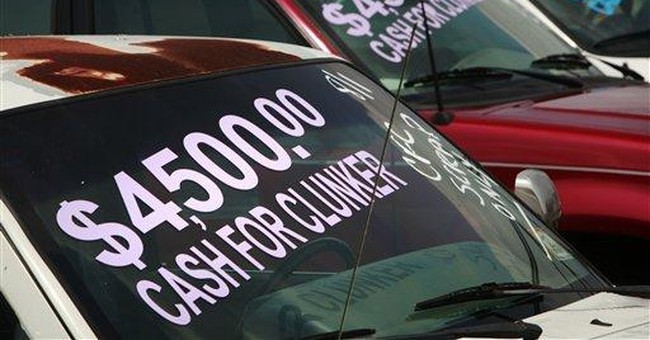 The economic illiterates in Washington are so impressed with the "success" of Cash for Clunkers that they're readying Cash for Clunker Appliances. The ludicrous "stimulus" bill gave $300 million to the Department of Energy to provide rebates for 10 types of appliances that have been rated energy efficient.

Before government extends Cash for Clunkers to more products, it might be a good idea to examine the original. The fact that Washington and the buyers who took advantage of Cash for Clunkers are gaga is hardly evidence that it was in the public interest.

It wasn't. As usual, the program has been judged only by its first and most visible consequences, violating Henry Hazlitt's teaching in his classic, "Economics in One Lesson":

"The art of economics consists in looking not merely at the immediate but at the longer effects of any act or policy; it consists in tracing the consequences of that policy not merely for one group but for all groups."

If you only look at the immediate effects, Cash for Clunkers appears pretty good. People traded in gas-guzzlers for more fuel-efficient new cars. The program cut carbon emissions slightly and gave the auto industry a boost.

"Manufacturing plants have added shifts and recalled workers. Moribund showrooms were brought back to life, and consumers bought fuel-efficient cars that will save them money and improve the environment," Transportation Secretary Ray LaHood bragged. "American consumers and workers were the clear winners thanks to the Cash for Clunkers program."

But wait. Shouldn't that be some consumers and some workers? And only in the short run?

Let's start at the beginning. The government paid car owners to trade in their old cars, which will be destroyed. But the government is running a deficit. So it doesn't have $3 billion to hand out. It must borrow the money, which reduces the amount of money for other investments. Moreover, the government must raise taxes in the future to pay back the principal and interest -- or the Federal Reserve will monetize the debt through inflation. Either way, we pay.

That isn't all. Those car buyers were either going to trade in their used cars soon or they weren't. If they were, Cash for Clunkers simply moved up the schedule. The stimulation of the auto industry occurred earlier. Big deal. But if buyers planned to keep their cars longer, the program imposed costs that are less visible. Without the government incentive to buy cars, consumers would have bought other things -- computers, washing machines, televisions. The manufacturers and sellers of those products didn't get to make those sales. Why should the auto industry get privileges at the expense of others?

Then there are the mechanics who would have serviced those used cars. They've lost business. Some will be laid off. Nor should we forget low-income people who depend on the used-car market for their transportation. The cheap cars they would have bought were destroyed.

What about the alleged environmental benefits? Assuming that cutting carbon emissions is worthwhile, was Cash for Clunkers helpful? It's hard to see why. People who traded in inefficient cars for efficient ones will likely drive more and therefore use more gasoline.

Even if carbon emissions are cut by a lot, economist Christopher Knittel says the program will cost more than $365 per ton of carbon saved.

Economist Bruce Yandle points out what a lousy deal that is: "The much celebrated Waxman-Markey cap-and-trade carbon-emission control legislation estimates the cost of reducing a ton of carbon to be $28 when done across U.S. industries. Yes, we are getting carbon-emission reductions by way of clunker reduction, but we are paying a pretty penny for it" (http://tinyurl.com/lnua3k).

Finally, there is something revolting about the government subsidizing the destruction of useful things. It reminds me of the New Deal policy of killing piglets and pouring milk down sewers to keep food prices from falling.

Leave it to politicians to think we can prosper by obliterating wealth.