How Will Obamacare Affect the Average American? 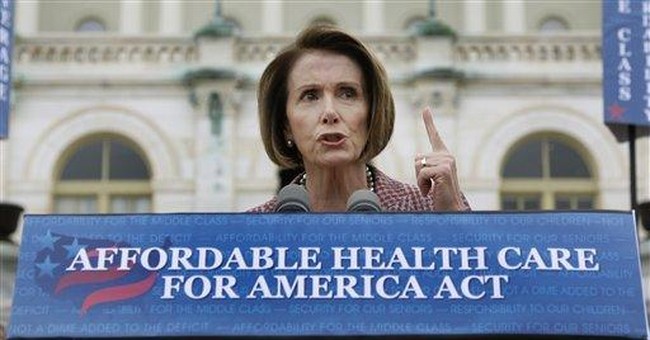 So Nancy Pelosi and President Obama are adamant that Congress pass their health care bill. They’ve dismissed the August protesters and are pushing for passage as soon as possible. But, what does this mean for the average American (we’ll call her Mary Smith), a single mother of two struggling to get by in a down economy. She hears terms like “individual mandate,” “employer mandate,” and “CBO score.” But none of this helps her understand what health care reform means for her.

Mary wants to help the uninsured, but why is Congress talking about changing her plan? And why does every report now indicate her premiums and her taxes will go up--and her employer could be fined or forced out of business? President Obama said his plan would control cost. She worries about losing the health plan she has and the doctors her children know. What about her job? What if her employer can’t continue to afford coverage? Will decisions about her family’s coverage and medical care be made by her or someone in Washington? Will it be a radical change that rations care?

Unfortunately, Washington politicians are ignoring the concerns of average Americans. Mary Smith’s family’s health care is about to change dramatically.

Mary gets her insurance through her employer. She has a plan that suits her needs, and has a great relationship with her doctors. She’d like more personal say in her plan, but like 83% of Americans, she’s basically happy with her care. Why don’t the politicians just fix what’s broken—cover those without care and people with pre-existing conditions? Instead, they are forcing her to change her plan. H.R. 3200, the House bill, changes every plan in America. Some are outlawed sooner, but virtually all are disqualified in five years.

Mary’s parents also lose the coverage they know, understand, and like. They have Medicare Advantage, which provides benefits they like over and above regular Medicare. Under Nancy Pelosi’s proposal and the Senate bill, that program will disappear.

What’s worse: when Mary goes shopping for a new plan, it will have been designed by a government bureaucracy, even if the so-called “public plan” isn’t adopted. These new, “government-approved” plans will make her pay for services she doesn’t need, and can’t afford, like alcohol and drug counseling, even if these aren’t health care concerns for Mary or her family. She'll be forced to buy services she doesn’t want because it will be illegal to buy just what she needs. It’s like being forced to buy a multipack of cereal boxes when you know you’re only going to eat the corn flakes.

The government will dictate coverage requirements, reimbursement rates, prices—even “approved” marketing practices and “free” wellness coverage. “Free” wellness coverage? Who’s kidding who? She knows nothing is free. Of course costs will go up. Like it or not, Mary’s family will lose the plan they have and maybe the doctors they like and trust. And, the government is serious about making that happen. If Mary doesn’t comply and purchase a “government-approved” plan, she'll be fined. If her conduct is willful, she'll be guilty of a misdemeanor. When did health care “reform” become about punishing people instead of controlling costs and helping the uninsured?

With thousands of pages creating 53 new boards and bureaucracies, Mary will lose the freedom to make her own health care decisions. Washington politicians are seizing the power to control health care for their political gain.

Instead they should be giving Mary and millions of American families the ability to make their own choices, imposing discipline on health insurers and providers to control cost.

Mary won’t even be able to keep her Health Savings Account (HSA). For years, she has been putting money away tax-free to help cover future medical expenses. Why is Congress outlawing HSAs through the fine print of a 1,502 page bill?

Even her 22-year-old daughter, who is looking for her first job after college, will be hurt. She’ll be compelled to buy insurance at rates that subsidize the elderly. That’s right: the “government-approved” plans set the rates for the youngest and oldest, and Mary’s daughter’s policy will cost far more than the actual cost to insure a 22-year-old. Because the bills also compel all employers to provide coverage, the cost of hiring employees will go up and hurt her daughter’s chance of finding a job.

For their own political gain, career politicians are rushing this legislation through so fast the Congressional Budget Office doesn’t have time to evaluate it. The most recent score politicians are touting counted only seven years of expenditures against ten of revenue. Even Mary’s family budget would look good if she could “score” it that way! House Democrats are being told to vote for this massive, new, untested health care regime—or else. Those who are worried about Mary risk career-ending retribution if they even think about opposing their leadership.

Mary started listening to the health care debate because she was worried about the rising cost of care. It sounded like reform would make her care more affordable. It doesn’t sound like that any more. Now, as Mary balances her checkbook, she has to worry not just about cost, but about her job, and her ability to make choices, and now, how it will hurt her daughter. But, the politicians will look good.