John R. Lott, Jr.
|
Posted: Mar 17, 2021 12:01 AM
Share   Tweet
The opinions expressed by columnists are their own and do not necessarily represent the views of Townhall.com. 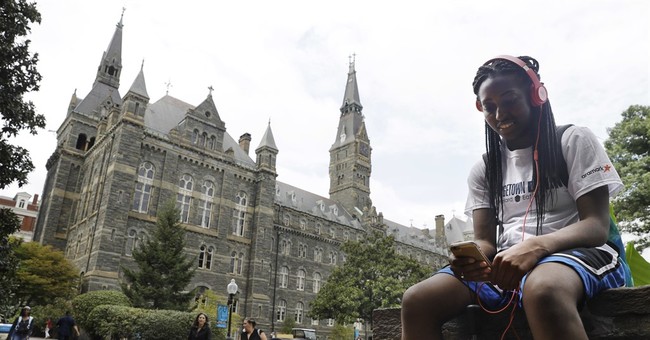 Some simple, obvious facts are too politically incorrect for academics to state publicly. Georgetown University just fired law professor Sandra Sellers and forced out professor David Batson. Sellers' offense? "I end up having this angst every semester that a lot of my lower ones are blacks," Sellers' said in discussion with another professor at the end of a Zoom call.

Batson's offense? He didn't condemn the statement, but instead sympathized with Sellers’ concerns. “What drives me crazy is… my own unconscious biases playing out in the scheme of things” might be responsible for their poor scores, he said. The logic is that blacks do poorly in college because of professors' biases.

Georgetown Law Dean Bill Treanor said he was "appalled" by these statements, but all academics know that this is true.

I held teaching or research positions at many universities – the Wharton Business School, University of Chicago, UCLA, Yale, Stanford, and Rice -- and I have heard these concerns raised many times. I have listened to even the most liberal professors make the same statements as Batson and Sellers.

But the left has only itself to blame for the harm that affirmative action in academia does to black students. For decades, black law school students' LSAT scores have regularly been much lower than those of whites or Asians. At the University of Chicago Law School, I heard faculty say that over several decades there was only one time when the highest black LSAT score was above the lowest white score.

The purpose of standardized tests is to predict how well students will do in college and law school. So guess what? Students with much lower scores than other students don't do well. Some of the students are so overwhelmed with the material that they get little out of their classes. Others switch to softer majors that don't prepare them well for successful careers after college. Still others drop out with such low grades that they can’t get admitted to other schools that might be more at their level.

When I was on the Wharton Business School’s faculty in the early 1990s, one of the most shocking things that I learned was that only 26 blacks in the country that year had scored above 700 on the math section of the SAT. Only 64 scored above 700 on the verbal part of the test. The average entering undergraduate at Wharton had an average SAT score in the mid-1,400s, but while Wharton ideally wanted a hundred black students admitted each year, there weren't many in the country who had scored over 1400 on their SATs. Wharton is competing against many other top schools, so the only way of accepting more blacks into its ranks is by dramatically reducing its standards of admissions.

Schools have tried to give a helping hand to these students, but with little success. When I taught at UCLA's business school, special summer sessions were set up for minorities to bring them up to speed with the other students. But one summer-long course couldn't make up for the skill gaps.

This affirmative action has caused major changes in how colleges operate. For example, students are no longer failed out of school the way that they were in the 1960s. If they were, most of the students who flunkout would be black. Have you ever wondered why colleges report SAT and ACT test scores as ranges from the 25th to the 75th percentile? Why not from the 5th percentile to the 95th? The 25th percentile cutoff conveniently hides the low scores of affirmative action students.

Political pressure has gradually corrupted standardized testing. When the SAT started, the goal was to design a test that would best predict student performance in college. However, over time, test questions were excluded if minorities or women tended not to do well on them. If women did relatively poorly on the SAT History subject questions that contained dates, dates were excluded. If blacks or women did relatively poorly on certain types of Math or English questions, the College Board replaced them with ones on which they did relatively better. That sealed the fate of SAT analogy questions such as "warm is to hot, as amusing is to hilarious."

Some state legislatures ban public universities from engaging in affirmative action, so colleges resort to other tricks. For example, instead of relying on standardized tests, they simply admit the top 5% or 10% of their high school classes. Since some schools are overwhelmingly black or Hispanic, this ensures admission of certain percentages of minorities. But it’s not a good way of measuring academic ability. After all, the 25th-ranked student at one school might be smarter than the top student at another school.

The University of California and University of Texas systems are abandoning standardized tests in admissions, which only means more randomness in who gets in. Many smart students lose out.

The fault doesn’t lie with the universities. The fault lies with horribly performing public K-12 schools — a result of protecting teacher unions from competition. Hoping that colleges can make up for this damage is irresponsible.

Firing Sellers and Batson won't solve problems, but it will make everyone afraid to talk about them. The real losers will be black students.