John R. Lott, Jr.
|
Posted: Feb 18, 2020 12:01 AM
Share   Tweet
The opinions expressed by columnists are their own and do not necessarily represent the views of Townhall.com. 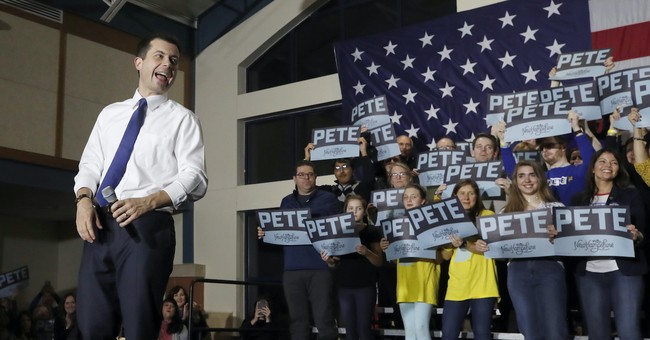 One of the Democrats’ favorite talking points on gun control is that we don’t need military weapons of war on America’s streets. Former mayor Pete Buttigieg has been the most effective of the presidential candidates at making this claim, because of his military background. If anyone knows whether a gun is a military weapon, it is surely an Afghanistan War veteran who was trained on these weapons.

Representative Tulsi Gabbard (D-HI) is the only other remaining candidate with military experience, having been a major in the Hawaii Army National Guard for 17 years, and she is the least outspoken about gun control.

“As someone who trained on weapons of war, I can tell you that there are weapons that have absolutely no place in American cities or neighborhoods in peacetime, ever,” Buttigieg declared at the Miami Democratic Presidential Debate in June last year.

“I think the weapons of war can do no good in American neighborhoods,” Buttigieg told CNN’s “New Day” last August. “I trained on weapons that are similar to these. And they have one purpose, which is to destroy as much as possible, as quickly as possible. They have tactical uses in war zones. Since when are American cities and neighborhoods supposed to be war zones?”

It is a theme that he has pushed endlessly.

But there are a few problems with Buttigieg’s claims. First, he never had military training, let alone weapons training. He never even received leadership training.

Naval officers typically go through four years at Annapolis or another military academy. Otherwise, they attend ROTC during college or complete Officer Candidate School as postgraduates. All of these programs involve extensive training. Instead, Buttigieg used a used little-known loophole — direct commission in the reserves — to skip all of the training that other officers receive.

Second, no self-respecting military in the world would use the “assault weapons” that we sometimes see in mass shootings. AR-15s fire the same sorts of bullets as small game-hunting rifles, and even do so with the same velocity and rapidity (one bullet per pull of the trigger). In fact, AR-15s aren’t allowed for deer hunting in most states because of the fear that they will wound rather than kill the animals. This may cause the deer to die slowly and painfully.

Buttigieg may be correct that weapons of war are designed to “destroy as much as possible, as quickly as possible.” But that’s not the story of civilian gun use. Guns can also be used to protect people and keep them from harm. About 95% of the time that people use guns defensively, they simply brandish the gun and cause the criminals to break of their attack.

Buttigieg supports virtually every other gun control law that is being pushed, from licensing requirements to mandatory gun locks.

There are few differences among the remaining Democrat presidential candidates. Even the supposedly “moderate” Senator Amy Klobuchar (D-MN) supports mandatory gun buybacks, though she insists that this is “not gun confiscation because you give them the offer to buy back their gun.” This is still taking guns away from people, whether or not you stuff some cash in their pockets when you do it.

Another candidate who is selling himself as a moderate is former New York City mayor Michael Bloomberg. His opposition to private gun ownership is well known. He is willing to start with a “voluntary buyback and ban on purchasing assault weapons, before enforcing a mandatory buyback.”

Buttigieg, however, is almost too good to be true for gun control advocates. By appearing to know about guns, he gives their ill-informed claims legitimacy. But Buttigieg should do the right thing and try to really educate Americans about firearms. He should admit that the AR-15 and other “assault weapons” function nothing like true weapons of war.