John R. Lott, Jr.
|
Posted: Apr 10, 2019 12:01 AM
Share   Tweet
The opinions expressed by columnists are their own and do not necessarily represent the views of Townhall.com. 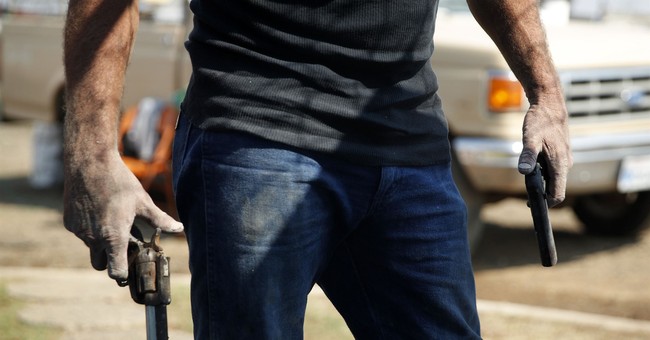 The push to demonize private gun ownership never stops. Michael Bloomberg and other gun control advocates are continuing to pour hundreds of millions of dollars into research that the news media uncritically disseminates.

Americans use guns defensively about 2 million times a year — about 5 times more frequently than guns are used to commit crimes. But don’t expect to see gun owners saving the day on television. Instead, gun owners are bigoted, hotheaded, and dangerous.

ABC’s The Rookie has a scene where an armed neighborhood watch group is patrolling its neighborhood. One man wears a red baseball cap and picks up a Hispanic-looking man who is trimming a hedge in his yard because he “looks guilty as hell to me.” The police arrive and tell the patrol members to put away their guns because protecting the neighborhood is a “job for law enforcement.”

CBS’s SWAT had a similar theme. After a hit-and-run driver injures gay men, and others are threatened, a gay “gun rights group” tries arming itself for protection (February 21, 2019, Season 2, episode 16). The police explain that the job of protecting people is their own, and that the gay men are just “amateurs.” Letting people defend themselves is described as “shooting up the streets.”

An April 1st episode of CBS’s Bull begins with a man shooting his wife in the back and then successfully persuading a jury that he thought that she was an intruder (Season 3, episode 18). The stereotypical Texan is also attacked as the jury is only too gullible to believe that the shooting was an accident. The show hits all the misleading rhetoric from gun control groups about spousal violence, and makes it look like anyone can just snap and kill someone else.

In a recent episode of Chicago PD, a criminal leaves a gun at a crime scene and the gun registration system allows the police to eventually trace the gun back to him (March 27, 2019, Season 6, episode 17). It is nice in theory, but reality never works this way. Registration is just a lazy way for writers to solve crimes, as we've seen for many years on NBC’s Law & Order.

In real life, crime guns are very rarely left at the scene of incidents, and the only exceptions occur when criminals have been seriously injured or killed. Also, crime guns are very rarely registered. In the exceedingly rare instances that they are, they aren’t registered to the person who committed the crime. That's why police in Chicago, Hawaii, DC, Pennsylvania, or Canada can’t point to any crimes that have been solved as a result of registration.

In “The Rookie,” police discuss how valuable gun registration and gun buybacks are to making Los Angeles safer (January 21, 2019, Season 1, episode 11). PoliceOne, the largest private organization of police officers in the US, recently asked its 450,000 members, “Do you believe gun buyback or turn-in programs can be or have been effective in reducing the level of gun violence?” Only 11.2% of police answered “yes,” whereas 81.5% said “no.” In just a minute and a half, the program hit on people’s fears about guns, including the risks of having guns in homes with children.

In NBC’s Chicago MED, doctor Natalie (played by Torrey DeVitto) asks Will (Nick Gehlfuss) to move back in with her. But she has a condition: he must give up his handgun. Will's handgun has been a major stumbling block in their relationship, and Natalie has frequently warned him about the dangers of owning a gun. This time, Will finally relents and promises to turn in his gun to the police. But Will fails to follow through and has his gun stolen shortly afterward. The criminal shoots a young man, seriously injuring him.

The lesson is clear: If Will had only listened to Natalie and gotten rid of his dangerous gun, there would have been no robbery and shooting. But criminals in Chicago don’t need to steal guns from law-abiding citizens. They obtain guns from drug gangs about as easily as they obtain drugs from those very same gangs.

* Lott is the president of the Crime Prevention Research Center and the author most recently of The War on Guns.