Expert: Billions in Chicago Bonds Pay for Literally Nothing 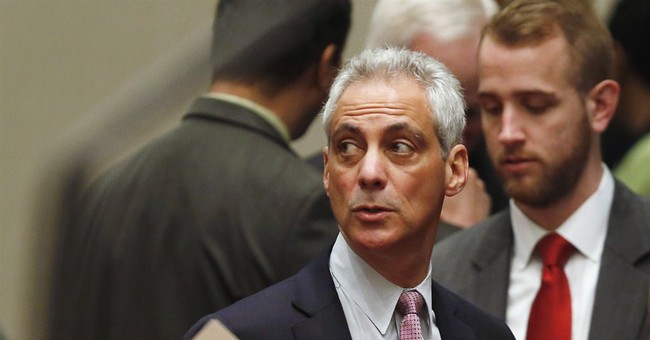 In masterful article by Kristi Culpepper, a muni-bond expert who works for the state of Kentucky, Chicago’s bond financing scheme is exposed as a house of cards that postpone debt payments in return for higher interest payments over time.

Amongst the questionable strategies exposed by Culpepper include using long-term financing to cover day-to-day expenses, using bonds to pay pension obligations and misappropriating returns from the interest rate swap portfolio as an “ATM” for the city.

And the winners are: Chicago city employees—union employees, for whose paychecks and benefit the scheme of providing short term-cash in return for high interest payments is run.

“So, Chicago’s structural budget gap is a political,” says Culpepper, “not economic, creature. Rather than cut expenditures to a level that could be supported by recurring revenues, the city mostly used non-recurring resources to fill the gap from one fiscal year to the next. This is not surprising. Most of Chicago’s Corporate Fund budget goes to salaries and benefits for its employees, and 90% of the city’s employees belong to around 40 different unions. Attempts to adjust expenditures tend to have well organized opposition.”

You can find my newest columns at DearComrade.TV

In addition, Culpepper says that some general obligation bond proceeds have been used to provide “discretionary” expense for Chicago aldermen.

In 2013, she points out, a Chicago Tribune analysis showed that $400 million in GO proceeds went to settlements and judgments, alone.

“In bond documents,” Culpepper gives as an example, “city officials deemed the back pay the city owed [police] an extraordinary expense and paid $164 million of it with tax-exempt bonds. The city ultimately will need to pay bondholders $280 million to cover the loan.”

And that the alderman go along with the scheme says the Culpepper piece, “probably has something to do with the ‘Aldermen’s Menu,’ which allows the aldermen to use a portion of the proceeds from the city’s general obligation bond issues to pay for whatever they want for their district.

And while Chicago-- and likely, Illinois-- taxpayers, in the best case scenario, will be forced to pay billions of dollars for things “that have little of tangible value,” the worst case scenario is that some combination of investors in the approximately $7.2 billion of outstanding GOs will get screwed in various ways:

First, if you hold the tax-exempt portion of these deals and the Internal Revenue Service ever gets around to scrutinizing them, your bonds probably won’t be tax exempt for long. Many of these uses of bond proceeds are not eligible for tax-exempt financing under the federal tax code. These bonds have received extraordinarily aggressive tax opinions?—?including, incidentally, from the same law firm that drafted Illinois’s swap legislation, which I will get to momentarily.

Second, Chicago taxpayers are on the hook for billions of dollars of long-term debt and have little of tangible value to show for it. There is a good chance that residents do not understand the nature of their government’s borrowing activities, since these were complex offerings. (Well, unless they read what I have written here…) As debt service payments increasingly compete with other political priorities for funding, this revelation might eventually erode the city’s willingness to pay.

Remember, a whole gaggle of Chicago types moved into DC with Obama. And while US Treasuries are less complicated than muni-bonds, the stench from the Chicago sleaze will come through… you know, one day, when the media wants to actually inform us what really happened under Obama as they now seem to do with former Mayor Daley and current Mayor Rahm Emanuel, Obama's former White House chief of staff.

You can find my newest columns at DearComrade.TV