BuzzLOL wrote: That 'slapdown' ignored that the Bushes created their buddy Osama bin Laden... and that Pres. BushSr. gave Kuwait to Iraq/Saddam Hussein for waging war against Iran for 10 years to benefit Israel... then the USA public objected so hard that Sr. had to drive him back out of Iraq... - Legislation Proposal: Limit Obama's Ability to Cash in on the Presidency

There’s good news for you.

Thanks to the folks at FilterEMF you can discard all of that unsightly aluminum foil that you put in your hat. That’s right. The company has developed what they call the brain cover: It’s a stretchy anti-radiation, silver-coated nylon 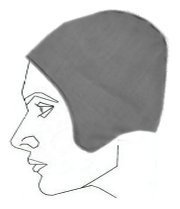 skull cap… with ear flaps. And they say that you can wear it either under your own hat, or on it’s own as a stylish accessory. “Provide your brain a quiet place without interference to your mental processes from RF radiation!”

I missed the part in the book Trilateral Commission for Dummies where the Bush family created Osama bin Laden.

I do however remember the historical fact that in the Soviet invasion of Afghanistan the Arab fighters were considered less than capable. I also remember the historical fact that bin Laden declared war on the United States when Bill Clinton was in office, not when either of the Bushes were. Having read quite a bit about how bin Laden turned Afghanistan in a training base for Al Qaeda, I don’t remember Bush—any Bush-- being there.

That’s because nothing but poppies grow in the Godforsaken place-- no trees, nor bushes.

As to Bush the Elder “giving” Saddam Kuwait in return for a war against Iran, that’s an old tired lie that was started by Saddam Hussein at the time of the first Gulf War.

Roger wrote:We can learn to live with ISIS now and attempt to contain it through better intelligence, or we can waste 10,000 troops for a decade and then give up as we have done in Afghanistan and Iraq. ISIS is here to stay whether neo-cons like it or not. - The Bloody Crescent: The Danger of Obama and Libertarians
Dear Comrade Roger,

If you believe that ISIS can be contained by better intelligence, then you have no idea what intelligence actually is. Go read John Keegan’s excellent book Intelligence in War.

The problem with you and Obama is that you are looking for a soft way out. Intelligence doesn’t provide that.

Intelligence can make a difference when it comes to decision-making, but wars are won by fighting. The idea that you can finesse your way to getting the other guy to stop fighting when you face a fanatical foe is the kind of wishful thinking warmaking that has put us in the spot we are in now.

What matters in war is movement and fighting.

I don’t want to live with ISIS: I want to kill it. My policy is that when threatened with death I take the threat at their word. It’s like the saying at the French zoo: “This animal is wicked. When it is attacked, it defends itself.”

And until Obama increased the number of troops in Afghanistan—taking them out of Iraq-- we did contain the Taliban.

According to an analysis done by CNS news 73% of casualties in the Afghan war have come since Obama was inaugurated.

In total, 2,144 U.S. military personnel have given their lives fighting in and around Afghanistan as part of Operation Enduring Freedom.

1,575 of the U.S. military personnel who have sacrificed their lives in this cause were killed during the presidency of Barack Obama.

That means 73 percent of the casualties in the Afghan War have happened on Barack Obama’s watch.

Commanders in Chief have the unfortunate role of commanding young men into battle, and as a result some of them die. It really sucks when they miscalculate as happened in Iraq. It’s beyond the pale when they order them to battle even when they know they are doomed to die and fail.

In a passage about a key meeting in March of 2011,[then Sec of Defense]Gates writes that "as I sat there, I thought: The president doesn't trust his commander, can't stand (Afghan President Hamid) Karzai, doesn't believe in his own strategy and doesn't consider the war to be his," according to the Times. "For him, it's all about getting out."

So blame who you wish.

But the historical record says Obama tried nothing in both Iraq and Afghanistan.

You may think that he’s supposed to try nothing. But that’s not what you are advocating with ISIS, right?

Or as I suspect, both you and the president would try nothing and call it a strategy.

cama9 wrote: Mr Ransom, you once again spit on our Founding Father's who preached the best foreign policy ever devised. If you lived back in Washington's time, you'd be crying that we need to go to war against England and fight with the French. You'd be railing against Washington's Neutrality Proclamation and have choice words against the Jay Treaty. You'd be calling for the head of Washington whose maxim declared, "steer clear of permanent alliances."
The Government should never have armed 'ISIS' in the first place - and we all know it did in its bid to take down Assad. The absurd Iraq War left that country open to every extremist in the world - two huge mistakes made by our empire-seeking, warmongering government.The best we could do now is ensure Assad has the weaponry he needs to fight fight what the US government created. And we sure as heck better stop the nonsense in the Ukraine, too. It's their oil, leave them be. - The Bloody Crescent: The Danger of Obama and Libertarians

But yeah: I supported the war of 1812. The USS Constitution was the only active duty Navy vessel I served aboard. I think Brian Williams was there too.

War with France? I guess when France was mucking around Mexico I would have supported kicking them out.

As to arming ISIS, yeah…duh…nobody outside of the Obama administration thought that was a good idea.

Hell the administration would suspend your right to own a gun but just keeps arming radical Islamists, without even so much as a background check—which by the way I heard liberals say can be done instantaneously.

Oh here’s a strategy to think about: Why don’t we just limit arms sales to ISIS to low capacity magazines.

Lastly, Ukraine has no oil. If you are gonna criticize me for advocating a policy on Ukraine, maybe if would be helpful if you knew something about the actual country in question and the reasons for the war. I know that's counter intuitive for a liberal to know what you are talking about first before talking. But for the rest of us folks this is a "method" we employ to make decisions about what to say and write.

Francis W. Poretto wrote: "We know too that the people of these lands, like every average American, just wants to be let alone."
That assumption led to the attempts to democratize Afghanistan and Iraq. Would Mr. Ransom like to comment on how those Charlie-Foxes worked out? Or perhaps on how ethically wholesome the governments we installed and supported in those countries have proved to be?
Surveys of opinion in Islamic countries tell us the exact opposite from Mr. Ransom's assertion of "knowledge." - The Bloody Crescent: The Danger of Obama and Libertarians

I don’t know which surveys you’ve read, but there hasn’t been a poll of Iraqis since ISIS first popped up. At that time Iraqis did not want a US troops presence, but felt that the United States was the only “honest broker” amongst the Iraqis, according to an Iraqi pollster. “Al-Dagher said that only the United States has the credibility with all Iraqis to help reconcile Shias, Sunnis, and Kurds with each other to ensure each has their fair share in the government,” reported the FreeBeacon at the time.

Since then of course the military situation has worsened. Iraqi leaders have asked for US troops, and now we have 2,600 troops there.

It would have been better if we never had left.

There was only one thing worse than invading Iraq. That was leaving.

Elucidated1 wrote: And that would be b s. "E xecuting" three people over a parking space. . is not reasonable. This WAS a hate crime despite your desperate attempt to say it wasn't. But very nice try. -- The Hate Crime President

There is no such thing as a “hate” crime.

There is only crime.

Hate crime is a legal fiction that empowers the government to control thought.

Steve Muckler wrote: What's good for Wall Street is not necessarily good for Main Street, so why is economic policy coming out of DC made by predominantly Wall Street types? This goes well beyond the current regime. As far back as FDR, Wall Street tycoons have been sought to advise gubmint officials. -- Is it 1970? Steelworkers Strike

The answer to all your questions is: Money.

Maryann33 wrote: We depend on our social security that we paid into all our working lives...Return it to its former glory...Maybe then we could have a few golden years...So far must work until we are dead...(then we can vote I guess) --- Legislation Proposal: Limit Obama's Ability to Cash in on the Presidency

Whatever Social Security was, it wasn’t glorious. Ever.

You don’t actually pay into the system. That would imply that the government holds your money for you and then you get it back. That’s not what happens. You pay today for a retiree today. Tomorrow when you retire, someone will pay for you. As long as there are enough someones working to pay for you that is.

Social Security as an old age pension system would actually be illegal if run by any organization besides government. It’s time to fix it to get it to work honestly.

That's it for this week,