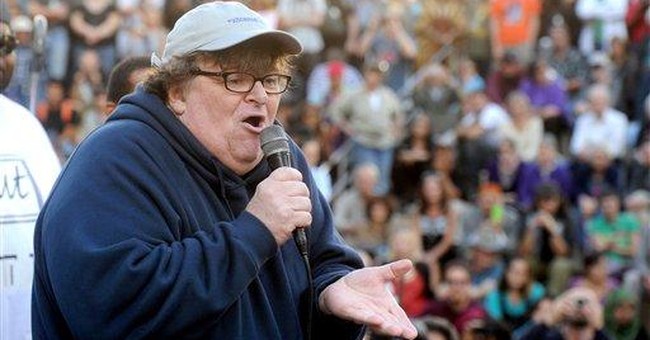 Michael Moore, a guy who has made his whole career about ambushing people and then cutting the film to make them look silly, mean or evil-- and importantly, unable to reply--suddenly looks silly, mean and evil. I mean sillier, meaner and more evil than he normally looks with his oversized clothes and food stained sweatshirts in the 10,000 square foot mansion and the Manhattan condo he apparently doesn’t even use.

Moore was doing his usual sniping on social media, because he believes someone still cares about his opinion. The self-appointed mouthpiece for the 99% with the $50 million bank account wanted us to know that all snipers are bad, even American ones, because his dad said so.

He told the Twitterverse this weekend as the movie American Sniper went big because it is full of conservative themes that Americans like, that he thinks all snipers are cowards because one killed his uncle.

American Sniper is the story of Chris Kyle, one of the most prolific snipers in military lore. The picture paints war accurately, as Churchill pointed out, as “cruel and squalid.” The film does not glorify war, even if it glorifies Kyle-- as it should.

The business of snipers helped win the war in Iraq by increasing the length at which American troops could lethally engage the enemy in urban combat. Simultaneously it also made the civilian population, amongst whom the insurgents hid, safe from incidental fire.

It is impossible to overestimate the contribution guys like Kyle made to securing a free Iraq, and Iraq would be yet free if guys like Moore hadn’t swallowed the truth.

“The reason that a few hundred snipers are so important now is that they,” writes Hans Halberstadt and Jack Coughlin in the book Trigger Men about the impact of snipers in the Iraq War, “almost alone on the unconventional battlefield of today, are effective at killing enemy personnel in meaningful numbers. As one US Navy SEAL officer told me recently, American snipers in the battle of Fallujah (from the SEALs, Marines, Army Special Forces, Deltas, Rangers, and other units) comprised less than 1 percent of the total number of friendly personnel on the battlefield but accounted for roughly 50 percent of enemy kills during the siege. These little sniper teams, with their simple weapons and simple tactics, are slaying the enemy in huge numbers.”

As usual, Moore still thinks this is 1943, and Flint, Michigan’s job is to turn out tanks to beat the Japs and the Nazis.

“My uncle killed by sniper in WW2,” Tweeted Moore. “We were taught snipers were cowards. Will shoot u in the back. Snipers aren't heroes. And invaders r worse.”

I’m assuming that a sniper in the United States didn’t kill his uncle. Thus he was fighting in one of the dozen countries invaded by the U.S. during World War II when he died.

So Moore must either think his uncle, as an “invader” was worse than the sniper who killed him; or as usual, he crammed facts in his big fat mouth then chewed them up to spit them out for us all to see the product of his gross-out performance art.

Somewhere inside of Michael Moore I keep expecting Andy Kaufman to pop out. At least I’m hoping he will.

In either event, Moore just proves the adage “garbage in, garbage out.”

Time for the garbage to be taken out.