A Documented American Stands Up Against Fences 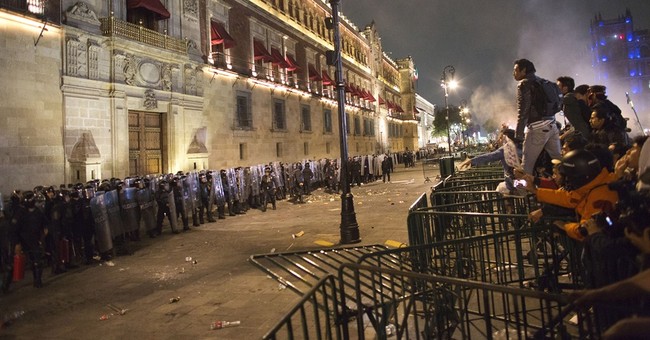 To make the White House more secure from undocumented visitors who are just seeking the same kind of freedom to be harassed by a government agency with guns that all Americans enjoy, a blue ribbon panel is suggesting that a better fence be built around the White House.

“An executive summary of the review released Thursday by the Homeland Security Department,” reports the Associated Press, “also concluded that the Secret Service needs more uniformed officers and plain clothes agents, better fencing at the White House and more training for officers.”

The report comes on the heels of several undocumented visits to the White House of the unwanted kind: that is, those visits that didn’t included unions or environmentalists.

And it follows congressional testimony suggesting that a moat be built around the White House as well.

No word yet on the drawbridge proposal or dungeon.

This was going to be cheap column about using the fence to try to keep the administration behind the fence, thereby protecting us from them.

But instead it will be a cheap column about how indeed a fence has the ability to keep “undocumented” folks out of a whole lotta of place.

For example, fences are used at, say, NFL football games so that “undocumented” ticket holders don’t get the same right to pay $10 for a badly cooked hot dog that those who paid for the privilege do.

I’ve noticed too that types of fences are used at airports. These fences are up so that “undocumented” travelers- who are just seeking the same right to travel the friendly skies with explosive ordinance of their own choosing that all Americans enjoy-- are unfairly excluded from strip searches, body penetrating radar and that device used to detect human gas emissions that we all have seen on YouTube.

The moral here quite obviously is that is you don’t want to have “undocumented” visitors then you just shouldn’t put up a fence in the first place.

Fences throughout history have just been an invitation for someone to climb over and thus make someone else responsible for the undocumented becoming undocumented in the first place. This is a kind of hate crime.

Instead of a fence, what we need to do is just arm the White House with shotguns. Then they can fire warning shots into the sky, indiscriminately, as VP Joe Biden has suggested homeowners do to protect their home. We know in this case that the laws of physics that say that buckshot which goes up, aided by gravity, must come down, somewhere else, just don’t apply here.

Oh and let’s not forget the “No-means-no” rape whistle. Let’s get a few boxes for the White House.

Because I’m sure the vice president would NEVER suggest we do something unsafe.

And it’s the same application of the law that we see on the border. If we wanted to get really serious about stopping undocumented workers we wouldn’t have built that fence in the first place. Because laws that we don’t believe in, like the law of gravity in the case of Biden’s shotgun, aren’t actually enforced.
Enforcing the law just makes it more likely we’ll find more undocumented people living here. Or that gravity exists.

And then the undocumented and the documented, the white and the brown, the black and the yellow would all enjoy the same right to be harassed by a government agency with guns that all Americans enjoy.

Better that we save that freedom for only those of us who the government has fully documented.