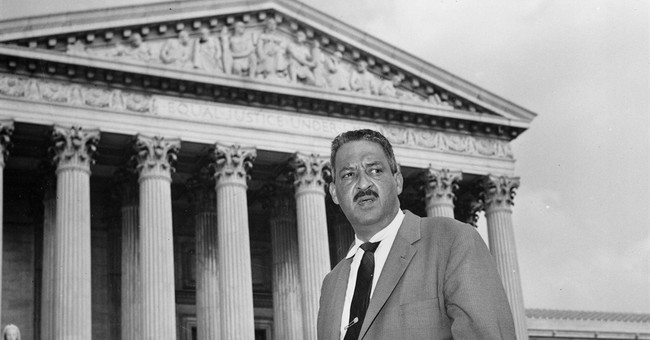 Obama finally has an employment policy that works. Apparently, if you cross the border from Mexico illegally, the chances of you finding and keeping a job rise considerably.

At least in California.

“Immigrants comprise more than one-third of California’s labor force (35%),” writes the California Immigrant Policy Center wrote in a report released in September. “They ?gure prominently in the agriculture, manufacturing, and repair and personal service industries. The undocumented in particular comprise a large share of the labor force in these industries as they represent 9% of the total state’s workforce. The undocumented alone comprise 38% of the agriculture industry and 14% of the construction industry.”

So I’m left wondering why Democrats aren’t suggesting that black teens cross the border unaccompanied by adults. Because that policy seems to be working out for the youngsters that Obama has encouraged to come to the United States illegally, at great expense to the U.S.

Of course a better policy might be to use those resources that Obama has been using to pander to the Hispanic community for another election cycle—postponing action on immigration to keep Hispanics in thrall to him-- on real programs that create jobs.

Or how about this? Let’s get the K-12 education system providing the same results for African Americans that is does for white and Asian children. Let’s use vouchers so that blacks can have access to the same type of education that Obama’s kids get, or the same type of education that Colorado Senator Michael Bennet had when he grew up. Bennet went to the prestigious St. Albans School, inside the Beltway, a school that the largely African American community in Washington, D.C. can’t afford.

Bennet’s family could afford it because his father was a diplomat. Government service sure has been rewarding for a long, long time.

But if you are a regular resident of D.C.—residents who are mostly African American-- you don’t get the perks generally associated with Washington service.

Obama, you might remember, killed the D.C. program that gave vouchers to families making less than $23,000 per year to spend at any one of more than 50 private schools in the D.C. area. These schools generally cost less than public schools per pupil and generally got better academic results. It cost about the government $12 million per year out of a budget of around half a billion dollars to provide vouchers in a D.C. school system that is a blight on the nation.

Obama says he wants a minimum wage increase. But why is he giving people a minimal education by trapping them in failed public schools? Education, they type provided by the D.C. voucher program, is the true key to increasing wages.

And the disparity between Hispanic employment and African American employment is the most pressing symptom of an education system that has left the African American community behind at a time that more people worldwide are moving out of poverty because of free market mechanisms.

It’s ironic that the progressive party, the party that admires so much of the rest of the world, is trying the hardest to deny to their most loyal constituents the same benefits that Chinese Communists and Indian Hindus are embracing.

Because in the real world, not the one Obama occupies, I’m thinking that graduates from St. Albans have slightly better chance of getting and retaining employment than illegal immigrants do today.

It’s too bad African Americans don’t have the same chance.