The IRS: A Public Monument to Sandra Fluke's Privates 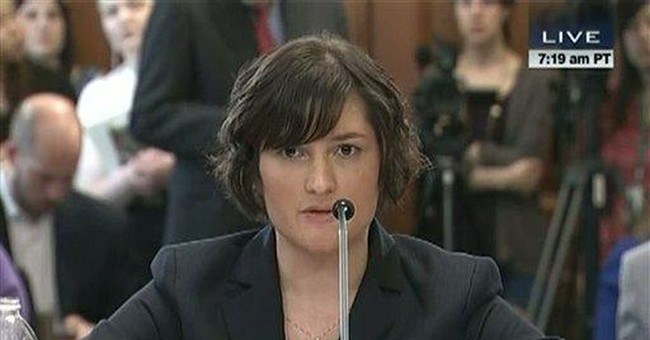 At 74,000 pages, the IRS code is a mind-boggling ode to lobbying, pork-barrel spending and graft. These are the only good things that I can say about the IRS.

Ode may be too friendly a word, however.

Let’s instead call it an incantation for our country. Because the code holds a country in thrall like the winged monkeys in Dorothy’s Oz were held. And until the witch is dead, we monkeys must do her bidding.

Politicians, economists and ordinary citizens can’t follow the tax code, which has tripped up cabinet nominees, majority leaders and others who ought to know better. But they don’t know better, and not just because of the venality of these people at the top—yeah there is that too-- but because the code is too complex.

Increasingly our government is proving indispensable to us by making things so complex that nothing works, from our economy to our tax code, without a great deal of forcing. That square peg indeed will go in that round hole…just as soon as the government rams it down our throats.

The National Taxpayer’s Advocate must release a report every year detailing the top problems facing the agency because there are a lot of problems. Tax compliance, political interference, and opaque language top the list of complaints.

60 percent of filers use a professional service to compute their taxes according to the National Taxpayer’s Advocate, which has identified “preparer fraud” as a top priority amongst items for reform. The rest of are thinking that perhaps the role of the taxpayer advocate is to do away with the need to use tax preparers in the first place.

That would reduce fraud quite a bit. They can’t steal if you don’t give them the opportunity.

A recent non-scientific survey of people not named Joe Biden revealed that 100 percent of tax filers would rather use a simple postcard sized return limited to about five lines.

And then there is the question of “fairness.”

Increasingly the IRS is used as a social policy and enforcement arm for the federal government. Getting past the undue scrutiny of non-profit applications turned in by conservative-sounding groups, the administration has not been hesitant to use the IRS to muscle industry too.

When the unions complained that too many sub-contractors were being used in residential and commercial construction at the expense of union employees, the Fairness Brigade at the IRS swung into action, forcing long and expensive audits of companies’ wage and hour practices.

But then there is still the serious issue of non-profit activity.

We allow government to tax us to fund certain agreed upon activities. Some of us make better use of the roads that few of us built—and no one built for free-- and therefore we get to pay higher taxes for the privilege.

But if you listen to liberals –and our government—the burden of proof that anything doesn’t belong to the government—you know besides Sandra Fluke’s uterus, which I think we can all agree, is a kind of national monument to stupidity—resides today with individuals and private organizations.

We don’t have the presumption that private property is innocent, but rather that it has to be defended, and is clearly guilty of SOMETHING. You know, like a Catholic University denying a student-- Sandra Fluke-- who went there voluntarily, a product or convenience-- birth control-- that is against the conscience of the religious organization that now must pay for it according to the IRS-- because the university uses roads too.

“Clarify the level of political activity that exempt organizations may conduct,” recommends the National Taxpayer Advocate as the solution to the IRS targeting conservative groups, “and establish an objective test to identify when an organization exceeds that level.”

Sure, we could do that.

Or instead, we could recognize that the only reason non-profits have to prove they aren’t political is because the government forgot that non-profit money wasn’t theirs to begin with.

And that’s the most generous thing I can say about government today.