Funny: More Awards for Obama...and They Got You Nothing

John Ransom  |  Jul 18, 2014
The opinions expressed by columnists are their own and do not necessarily represent the views of Townhall.com.
Top Columns
Trending on Townhall Media 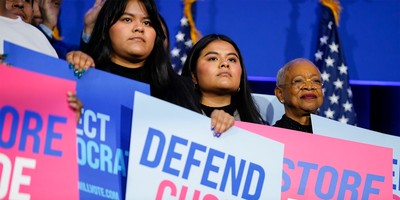 I have to claim responsibility for the newest parody that’s now starring as president of the United States on TVs everywhere. If ever there were a Steven Colbert character assigned to play a faux president, Obama would get the nod.

You see: he’s been nominated for an Emmy now.

In a comedy, playing himself, in a tragedy.

Seriously. His own incompetence has led to an Emmy nomination.

And it’s my fault.

When Obama visited Cooperstown’s Baseball Hall of Fame in May, ostensibly to promote tourism, I suggested with mock fawning that they should induct him into the HOF as the greatest baseball play ever.

“But I think that there’s a high probability that Obama believes the Baseball Hall of Fame will induct him into their hallowed halls as the greatest baseball player to ever live,” I wrote.

And this would make sense.

The man got a Nobel Peace Prize and he has sown nothing but war. War at home and war abroad.

The man has been declared by his liberal acolytes the greatest and blackest and gayest president to ever live. And whatever else may be said, he certainly isn’t the greatest president ever, while Bill Clinton is still blacker than Obama has ever been.

But if there is one thing that I have learned in life it’s this: Be really careful when mentioning bad ideas to liberals. They embrace them.

And so when Obama teamed up with Zach “Tax-a-Vowel-You-Can-Afford-It” Galifianakis to make a prop-up commercial about the failing healthcare website, healthcare.gov, liberals embraced the commercial, because liberals use humor better than conservatives do.

And they are more gullible.

And so the president’s botched launching of a simple website that likely gets less traffic than State Farm, is earning him an award.

The Between Two Ferns commercial, as it is known, has been nominated for an Emmy. Because while liberals use humor more effectively than conservatives do, ironically they also take themselves far too seriously.

“Obama’s appearance on comedian Zach Galifianakis’ Web series, ‘Between Two Ferns,’ was nominated Thursday for an Emmy in the Outstanding Short-Form Live-Action Entertainment Program category,” reports Politico. “The president was promoting enrollment on HealthCare.gov, and the White House said that traffic to the website increased by about 40 percent thanks to the clip.”

What was left of reality in the right breast coat pocket of former Obama chief of staff Bill Daley along with a few souvenir pens, one old tick tack, and three-year old receipt for copy paper from Staples, when he departed the administration.

But as the White House official press office, the Washington Post, points out, this wouldn’t be the first entertainment award for our president.

“President Obama won Grammy Awards for best spoken word album for 2008’s The Audacity of Hope and 2006’s Dreams from My Father.”

He’s been given more gifts than any man alive.

There was that mansion in Hyde Park, the U.S. Senate seat from Illinois—in fairness he might have paid for that-- his book Mein Kampf and the sequel, Mein Kampf: Rise of the Machines, the presidency, a Nobel Prize, two Grammy’s, the pending Emmy, plus that award he got for having the most transparent administration in the history of the now cooling planet.

All Bill Clinton got was that “Dad of the Year” award.

And they got YOU, the taxpayer who footed the bill for this tragedy playing in a comic mode, nothing. Zilch. Nada.

So if you think I’m kidding about Cooperstown calling Obama, well, I was.

But now I realize that liberals, those ultimate cronies, take me too literally.

For this I apologize.

Because this comedy is ending in tears. In fact, the tears have already begun.