Apology to Barney, Barack and Bernanke: I Forgot You’re Exempt From Our Laws 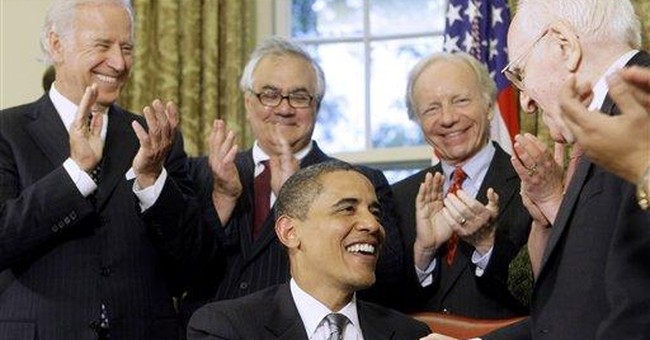 I want to apologize for doubting those guys, Barney, Barack and Bernanke.

Turns out that giving Fannie Mae and Freddie Mac $188 billion wasn’t going to entail any risk at all to the government, its employees, agents and beneficiaries.

Richard Lehmann has the details in Forbes.

“In fact, the two organizations [Fannie and Freddie] have repaid $146 billion of the $188 billion advanced to them since they were taken over,” write Lehmann. “In addition, some $90 billion of ‘profits’ were paid to the Treasury that went toward U.S. debt and deficit reduction.”

And all this time I thought that the trillion dollars stimulus that didn’t create jobs, the green energy scam that killed the green energy business in the US, the bailout and subsidization of the auto industry, the war on energy, the failed Dodd-Frank banking reforms, the Obamacare debacle, the rising numbers of people on food stamps, the deformation of our workforce to part-time employment, the arbitrary reinterpretation of the MACT act, the tax hikes on every single American worker and the failure to pass a budget- or even get a vote on one- since going 0-for-96 in 2010 on the Senate vote for a budget, was just more proof that Democrats knew nothing about fiscal matters.

I now see I was wrong.

Turns out that those guys could hang with Enron, Worldcom, Tyco International and a lot of the other “Big Boys” when it comes to accounting prowess. But they have an unfair advantage: They don't have to follow our laws.

“Does anyone remember that the biggest buyer of Fannie and Freddie mortgages is none other than the Federal Reserve Bank,” continues Lehmann, “a government organization that has no bottom line profit measure. The Fed, with its quantitative easing program, is simply buying $40 billion monthly in packaged mortgage MBS securities valued at prices that are giving Fannie that wonderful profit.”

So the government gave Fannie and Freddie money to bail them out and then bought their product- that is mortgage bonds- via the Federal Reserve, which is taking losses on those transactions?

I have that right, now?

Because of course the Federal Reserve doesn’t have to follow the laws that govern mere corporations, taxpayers, non-profits or any other organization ruled by Generally Accepted Accounting Procedures.

The Federal Reserve doesn’t have to mark down their losses

According to Lehmann this is the financial equivalent of General Motors selling their excess inventory in the Chevy Volt to themselves at full retail, and counting it as a profit.

And that turns double-entry bookkeeping into single-entry profit machines where the final entry is filled-in by you the taxpayer.

Sort of a double-cross-entry bookkeeping.

Of course if GM did that, someone might go to jail. Yeah, it’s GM so a jail term is unlikely. But if a company without the political juice of GM did it -- say Ford, or some other company not owned by Warren Buffett—there’d be jail terms for sure.

But the laws of man or God or science do not bind the government in accounting, fiscal or monetary matters.

So, it’s possible that we’ll never really know how much the government has lost so far on quantitative easing (QE).

As I pointed out last week, the Federal Reserve System, it’s been guesstimated, may have racked up $192 billion in losses on those transactions-- just from the recent rise in interest rates alone.

"Our estimate shows that the spike in bond yields since the first quarter of this year,” writes Scott Minerd, the Global Chief Investment Officer at Guggenheim Partners, “has caused a mark-to-market loss of $192 billion on the Fed’s holding assets, equivalent to approximately all of the unrealized gains that the Fed had accumulated since it began to implement quantitative easing in late 2008.”

Interest rates have continued to rise, despite the Feds easy money policies and zero-interest-rate policy. While the Fed ideally would like to keep interest rates from rising, the rate on the ten-year Treasury bond has risen from a low of 1.51% to a 52-week high of 2.74% printed recently.

Reality will eventually intervene in government operations says the bond market, even if the Fed can effectively shrug off the QE losses by papering them over.

In February, the Congressional Budget Office released a report that says that the budget deficit will grow through 2023 and “will eventually require the government to raise taxes, reduce benefits and services, or undertake some combination of those two actions,” reportedCBSNews at the time- and all of that just to cover interest payments.

“In its annual Budget and Economic Outlook,” writes CBSNews, “the CBO said debt held by the public will be bigger by 2023 than in any year since 1951 and will be at 77 percent of gross domestic product (GDP) by 2023, far above the 40-year average of 39 percent of GDP. As a result, the CBO report said, the federal government’s interest costs ‘will be very high’ and will be rising. Interest costs will more than double by the end of the ten-year forecasting period.”

The CBO projected in February that interest rates on the Ten-Year Treasury Note will rise from 2.1 percent to 5.2 percent in 2017.

Since then interest rates have added 60 basis points to 2.70, well started on its way to 5 percent.

We may never know the details of what QE wrought but eventually taxpayers will pay.

So once again, I apologize for doubting Barney, Barack and Bernanke.

I thought they couldn’t find new and unique ways to screw over taxpayers, while benefiting the government, its employees, agents and beneficiaries.