Soros, Obama Are Wrong: China's Not All That 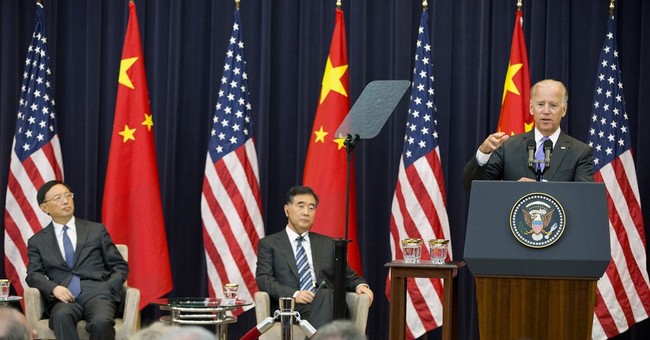 It was just two years ago that international, big-state economists were telling us that China would surpass the United States in GDP by 2016.

Economic, financial and progressive talking heads- whose hind parts are where their head parts ought to be- were then saying that China was to become the dominant economic player in the world by 2016.

That claim rested on the strength of an IMF report projecting GDP growth for China surpassing the US in GDP by 2016, just two years from now, by the specious use of purchasing power parity. Purchasing power parity is a math fiction that allows economists to count a 450 square foot , 7 bedroom apartment in Zhucheng as the economic equivalent of a 1,100 square foot 2 bedroom apartment in Lone Tree.

Armed with math like that progressives claimed that the IMF report showed that China was a much better economic model to follow.

Back then, liberals were hailing China’s top-down economic management and acumen; marveling at the endless supply of people and sucking up to Commies like they were the reigning champions on the worldwide smash hit The World Has Talent.

“Perfect order and global governance are not realistic expectations,” George Soros told a group of sycophants at the Paris Club, in, er, Paris, France. “However, it is a sad fact that Western democracies provide less successful leadership than China.”

It’s hard to believe I know, but even the President of the United States, Barack H. “Look-at-Me” Obama, was elbowed out of the spotlight by China.

It got so bad that the liberal savior was wishing out loud that he were president of China in Beijing, as opposed to being president of the most vibrant republic the world has ever seen.

But something dreadful has happened to the command-and-control state since then.

Yes… economics- and liberty, which is really the same thing- have elbowed China aside and the once-soon-to-be-most-powerful country in the world is looking more like a wannabe economy to the great surprise of George Soros and Barack Obama.

“Growth in China,” reports the Wall Street Journal, “the world's second-biggest economy after the U.S., has been slowing since 2007's peak, but that slowdown has accelerated recently. This year, according to the government's target and economists' estimates, China is likely to see its weakest growth since 1990, around 7.5%.”

By the by 7.5% is the official estimate…yeah, the one the government says the economy will produce.

Some China watchers, however, are saying what we have said all along: China’s demographics are real but the economy is paper dragon.

“Chinese financial markets often seem less volatile than one would expect for a poor, developing country,” wrote Michael Pettis via Mike Shedlock’s Global Economic Trend Analysis, “largely because of administrative measures that intentionally or unintentionally suppress normal volatility. These kinds of systems, however, are not less volatile. They seem less volatile because small shocks have minimal impact. Larger shocks, however, tend to cause a much greater than expected surge in volatility.”

There is a lot to be said about having two billion people when your economy is growing, but hard to keep growing that way when you have the president in Beijing calling the shots with a lot of little presidents scattered in the provinces doing the same thing all anxious to cover-up their own Solyndras and Fast and Furious scandals.

Let’s just say that financial transparency isn’t a strength for China. In fact, ZeroHedge thinks “that China's 2012 GDP growth was only 3-4%, half the reported 7.8%.”

“The chances for China to achieve both structural economic reform and a smooth growth trajectory—to have its cake and eat it too, in the manner to which it has become accustomed—are now much reduced,” says Andrew Batson, research director at Beijing-based economic consultancy GK Dragonomics, according to BusinessWeek. “China needs to stop forcing SOEs (State Sponsored Enterprises) to make lousy investments. Yet it is precisely the government’s ability to get the state sector to invest, regardless of the short-term outlook, that kept growth from being even weaker in the 2008 and 2012 downturns,” writes Batson. “China must give up its main tool for supporting short-term growth if it is to have a good chance of achieving decent longer-term growth.”

That criticism is largely true here in the U.S. and in the European economies as well.

Politicians are sacrificing long-term economic growth for the Band-Aid that gets them from one election cycle to the next.

That dictatorships and democracies alike are both making the same mistakes should serve as a wake up call to both forms of government that they are out of touch, out of luck and out of ideas.