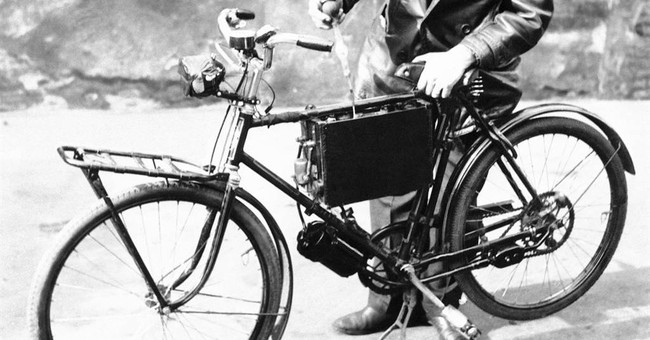 LogicDesigner wrote: It seems that John Ransom is at it again. I can just see his thought process. "Oh dangit, the GM has lowered the price of the Volt and now they had a record sales month. I better find some way to spin this story into how the Volt is an utter failure! If anyone disagrees with me I'll just call them a troll and question their conservative credentials!" (It seems John also deleted his comment where he called one of his critics a troll and accused them of pretending to be a conservative). "Someone should give me a Pulitzer Prize for my outstanding journalistic integrity- Chevy Volt Heads for Fiery Crash

Logic? That’s kind of pretentious for a guy who doesn’t use any facts to rebut my article, don’t you think?

But what would liberals be without their pretenses?

I don’t delete comments on Townhall.com or Townhall Finance. I don’t have time to moderate the pages as I did in the past. In fact, I just asked the moderator to lighten up on deleting posts because I like the debate.

But as you know, your comrades have spent time mucking up the pages with off-topic posts, trolling their way on page after page, writing vile retorts often laced with sexual overtones and racism. Like liberals everywhere, they ruin it for all of us and the claim “Who? Me?”

GM HAS lowered the price on the Volt with incentives, that may of may not be temporary. As I wrote in my article, they did it because despite a record year for car sales, Volts sales were only up year-over-year by 1.7 percent according to the company as of end of May 2013. They were looking to go into the 2014 production year in July with 9,000 extra Volts in their inventory.

That’s even after idling production several times because Volts weren’t going out the door fast enough.

According to Inside EVs that’s almost 40 percent of the Volts produced in the model year 2013 through the quarter ending in March. In 2013 the company had produced 23,107 Chevy Volts in three quarters of production.

It wasn’t I who said that GM’s Volt program was threatening to get “unplugged,” but rather NBCNews, which is NOT a conservative news outlet.

“With signs that sales of its Chevrolet Volt battery car could be coming unplugged,” reported NBC News in June, “General Motors is offering potential buyers as much as $5,000 in incentives – making it the latest maker to try to cut prices in a bid to boost lagging demand for electric vehicles.”

In June the company reported 2,698 Volts sold thanks to those drastic discounts by GM. In fact, all battery-powered cars have seen deep price cuts due to disappointing sales.

“For the first five months of this year,” said NBC News, “GM has sold only 7,157 of what it prefers to call an extended-range electric vehicle, or E-REV. May sales, in particular, fell 4.3 percent, to 1,607. By comparison, the overall U.S. automotive market was up 8.2 percent for the month. According to a report by Inside EVs, Chevy dealers have more than 9,000 Volts clogging inventories, vehicles they need to clear out before the 2014 models start rolling in.”

You know it’s a real low when you question my “journalistic integrity.” I have worked very hard to make sure that people know that I AM NOT NOW NOR HAVE I EVER BEEN a journalist.

I’m a writer. And I also do a radio show.

I would never be journalist. That’s kind of like being a used Volt salesman, which has to be bottom of the barrel.

VoltOwner wrote: "The battery costs about $8,000 to replace and lasts- in principle- about eight years. "How stupid this is! The WARRANTY is 8 years/100K (10 year/150K in CA) and it covers capacity loss (to 70%) so the battery will give you at least 28 miles of range or it gets replaced with one that does. Saying I have to spend $8K at the end of 8 years is idiotic. Sure I may not get as far without using some gas, but so what! The car is not broken, it's just aged a little. People drive gas cars all the time with things like oil being burned due to bad rings and they don't immediately run out and do the work required to fix it, they just get used to adding oil more often, same deal. ­-- Chevy Volt Heads for Fiery Crash

The real idiocy is that you spent $8,000 in ADVANCE for the Volt battery.

The point here that you seem to get stuck on is that battery might last longer than eight years. I’m glad you’re confident, but GM decided to only warranty the battery for eight years—likely with good reason.

Volts that spend more time in temperature extremes will likely have shorter battery life. But of course no one really know what will happen because no one has ever driven a Volt is real world conditions for eight years.

“GM says 70% of battery capacity, at least, would be typical for a Volt at the end of its lifespan. Your mileage may vary,” says Extremetech.com. “Some Nissan Leaf owners were annoyed that their EV driving range had fallen dramatically a year or two, from a Nissan-specs range of about 85 miles per charge down to about 60 miles, especially with Leafs in hot weather cities driven up to 20,000 miles a year.”

I have to assume that most of the useful life had completely depreciated by the time the warranty runs out, because that’s what GM has done.

Jwallace341 wrote: John Ransom, You are really doing harm to your country by stirring up all this anger. Right from the start, just by your story heading "Volt heads to a fiery crash". I know you republicans very well, I was one of them, but I never thought republicans would stoop so low as to put down and go against your own country. You are the same type of person that would complain about someone getting lower taxes by buying an electric car, yet you itemize your tax return to get a maximum deduction. You try to pay as low of a tax as you can, even claiming charitable donations and you never gave a penny in your life. I have watched co-worker republicans do this all the time. Yet you sit on your high horse and tell someone that is buying American and employing Americans that somehow they are using other people's money. Some of you people will even have off-shore bank accounts to avoid paying taxes. You claim to be so conservative but you fail to understand how electric cars will lighten the load on supply demand of gasoline which will lower prices for all, for that amount of less demand. - Chevy Volt Heads for Fiery Crash

I doubt very much you were ever a Republican, but if you were, thanks for leaving the Grand Old Party.

Anyone who thinks that the Chevy Volt is the same thing as the country belongs to the Other Party, the Party of Dopes and Chains.

Do your co-workers know that you are spying on them on behalf of the IRS as you watch them claim charitable deductions when they have never given a penny in their life?

Maybe you should go work for the NSA.

Many professionals, like doctors and lawyers use them to make sure that knuckleheads like you, who think that EVERYTHING is their business, have no means of suing them and then using the proceeds to buy a boat or a new car or something else you didn’t work for. That’s the liberal way, right?

Any way tax evasion is still illegal in this country and even Democrats use offshore accounts to protect their assets.

In fact, while I’m not a lawyer, I would tell anyone who has accumulated over a million dollars in assets to consider domiciling their assets offshore while complying with all tax codes.

It’s the best lawsuit protection you never have to buy.

Ferris wrote: I have an MBA from the Ross Business School (UMich) and I dare you to go into a dealer and price out a lease for a Volt. I pay $170 per month and have zero costs for gas. Explain to me how Volt isn’t a good deal. - Chevy Volt Heads for Fiery Crash

I dare you to go out a price out an MBA from the University of Michigan. Because… you got robbed. That is if you really do have an MBA from there, which I doubt because you have a whole bunch of other facts wrong too. You probably used to be a Republican too, you troll.

Go away before I delete you and taunt you a second time.

The cousin to the Chevy Volt, the Chevy Cruze is now being offered at $149 per month on a 36 months lease with about $1200 due at signing.

The Volt’s latest lease deal, on the other hand, according to PluginCars.com, looks like this:

“The Volt also can be leased for a compelling $269 a month for 36 months, with $2,399 due at signing or can be purchased with zero percent financing for 48 months and receive $3,000 in cash off the price. The financing and lease deals run through July 1. These offers put the Volt within striking distance of the batch of pure electric cars—LEAF, Spark, 500e, Fit and Focus Electric—available at or near $200 per month.”

So basically you are paying $5,520 more for the Volt than you would for the Chevy Cruze over the same period. Since the lease terms are 12,000 miles, this makes the math very simple.

The Volt gets about 38 miles per charge, if you don’t use any other electric options like air conditioning or heat and each charge costs between $1.00 and $1.50 depending on where and who you believe.

But unfortunately you’ve spent $4,465.75 more over three years on the lease terms after you subtract out the savings for gas.

If you add up the per-year amount over the warranty life of the car, you get suspiciously close to the replacement cost of the battery pack that powers the Volt.

The Volt battery is 16KWh. A report by McKinsey and Company says that lithium-ion batteries, like the ones that power the Volt, cost $500-$600 per KWh although they could drop in the next five years.

But as of right now, they have the same problem they have had for over 100 years: They are too expensive to compete with the internal combustion engine.

That, in short, is why your Volt sucks. And I when I say “your Volt,” I mean it in a very personal and real sense.