Liberals Find Out Eric Holder is Who We Said He Was 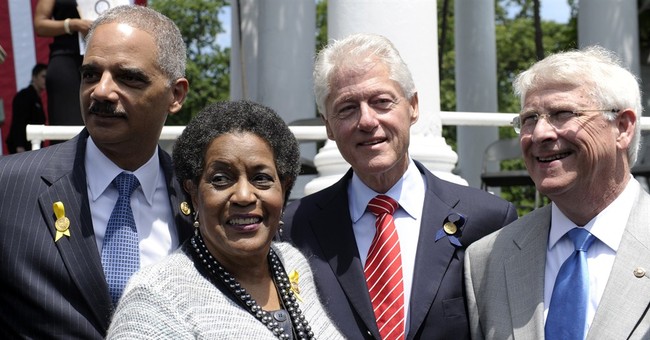 Now that the election is past us, perhaps liberals and conservatives can agree on a bipartisan measure of reform that’s sorely needed in Washington: Obama needs to remove Eric Holder from his spot as the nation’s top law enforcement officer.

As a conservative, I have been outraged by the selective prosecutions, subversions of the laws to protect political power, the disregard of constitutional checks and balances, along with the general arrogance of the Arrogant General, Eric Holder.

And now, it seems, liberals are starting to have the same concerns that conservatives do.

The growing unease that liberals have felt with Holder may have reached the breaking point before the recent troubles.

The disillusionment started to materialize with Holder’s declarations that prosecutions of crimes relating to the financial system will have to take a back seat to the overall health of the economy.

So in other words, people like former Obama economic capo, Democrat Jon Corzine, will get to skate after his firm “misplaced” $1.6 billion in customer-segregated accounts; money that was supposedly off limits, in the same way that I’m not entitled to spend money in YOUR checking account.

And Corzine is not the only example, just one that conservatives like to use.

Apparently ANY large financial institution’s employees can commit a crime, and, according to Holder’s theory of the law, the economic health of the country comes first. Justice just has to wait. Or be suspended all together, as long as those people are big and important enough.

Not coincidentally, these same financial institutions and the people who run them are some of the biggest donors to political campaigns in the nation. And they give to both parties.

"I am concerned that the size of some of these institutions becomes so large that it does become difficult for us to prosecute them when we are hit with indications that if we do prosecute -- if we do bring a criminal charge -- it will have a negative impact on the national economy, perhaps even the world economy," Holder told senators last week according to CBSNews. "I think that is a function of the fact that some of these institutions have become too large."

I wonder who as “hit” Holder “with indications” an indictment in a criminal matter might have a “negative impact on the national economy, perhaps even the world economy”?

Mr. Obama? Care to field this one?

Eric Holder was not appointed by the president, under the constitution, to decide cases on the basis of the national economy; nor on the amount of money that donors make to Obama’s campaign; nor yet on the basis of race, creed, and unmanned aerial-vehicle make, model and armaments configuration.

Holder doesn’t seem to understand that his function as attorney general is to uphold the law, and that his failure to recognize his role is enough to disqualify him from the top spot at Justice.

Conservatives have long held the view that Holder’s political bias make him unfit to be the country’s top law enforcement officer.

Mr. Obama can fire Eric Holder now, as even some liberals now agree.

Ok, the last one really isn’t about Holder resigning. It’s about a much better option: Fire Obama.