Good news everyone: Jobless claims on a weekly basis fell to a five-year low according to the Labor Department.

And why is that? Because Obama doesn’t care about jobs.

When you reckon out the newest jobless figures using the Obama’s best calculus, the weekly decline doesn’t mean that fewer people are unemployed.

That would be asking way too much from an administration that seems phobic about private-sector job creation.

“Applications for jobless benefits decreased by 37,000 to 335,000 in the week ended Jan. 12, the lowest level since the period ended Jan. 19, 2008, Labor Department figures showed today,” reports Bloomberg. “Economists forecast 369,000 claims, according to the median estimate in a Bloomberg survey. A spokesman for the agency said the drop may reflect the difficulty the government has in adjusting the data after the holidays when seasonal workers are let go.” [Ransom’s emphasis]

And I bet you wanted jobless figure to reflect actual joblessness.

You obviously know nothing about good government.

The murky math that shows claims falling is belied by other statistics released by the Labor Department that look at long term trends in unemployment: 3.21 million continue to receive regular jobless benefits, and another 2.06 million are receiving extended benefits under a federal emergency program. Joblessness amongst those eligible for benefits- our newest employed- rose 2.5 percent, all according to Bloomberg.

“Our weekly numbers bounce around quite a bit,” the Labor Department official said as the figures were released. In the first couple weeks of January, unadjusted claims typically rise to the highest level of the year. The increase this week was smaller than the agency anticipated in adjusting the data.

“This tends to be a short-term distortion,” he said, noting that similar patterns occurred in January 2007 and 2008.

At best the jobless trend is flat, echoes our friend(s) over at Political Calculations.

“The last time the U.S. had a flat trend for new jobless claims was right before the onset of the so-called "Great Recession" at the end of 2007, says PC. “The only problem is that it's gone flat at a level some 48,000 layoffs per week higher than was typical during the low-unemployment years of the Bush administration.”

In fact, we may be facing a “best-of-times” scenario, in part caused by falling gasoline prices.

Initial optimism about the economy in 2011 and 2012 died as gas prices spiked up between January and July. The higher prices seem to have taken jobs along with them. 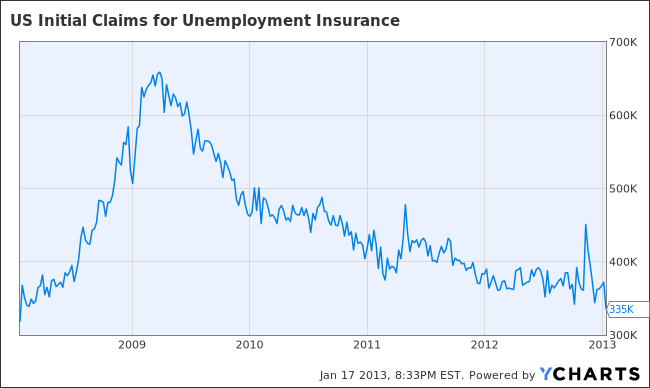 Note the spike in jobless claims in April of 2011 and November 2012, following peak gasoline prices.

Forget about the fiscal cliff and “tax reform” and  the debt ceiling.

What’s killing the economy is job creation- or lack thereof. And the data suggests that the lack of a coherent energy policy might be the prime culprit.

So here’s an idea for the GOP to consider: Rather than just executing a cave in on the debt ceiling debate and raising the ceiling without consequent spending cuts, perhaps it’s time to change the rules of the game.

Instead of the demanding spending cuts on the one hand or tax increases on the other, make Obama do things to help create jobs AND ENERGY like approving the Keystone pipeline

Because there is no way that this economy is getting better without jobs and energy solutions no matter how high the debt ceiling goes.