This is the year that the fake energy provided by our fake president finally collide and go boom.

So, get ready for a new round of green bankruptcies, as Europe trims back subsidies for solar companies and taxpayers lose their appetite for subsidizing green power.

“The mini-bubble resulting from the rush to cash in on solar subsidies in European and U.S. markets is ending, as feed-in tariffs drop in Europe while loan guarantee and tax credit programs tighten up in the U.S.,” says a new report from Bank of America Merrill Lynch according to CNBC.com.

Germany is dialing back subsidies for solar this month by 29 percent with subsequent decreases each month, according to Bloomberg.com.

Rasmussen has recently released a survey of voters that show a diminishing number of voters support subsidizing the production of the Chevy Volt.

Only 29 percent of likely voters agree with Obama’s latest proposal to include a $10,000 subsidy in the federal budget to support the purchase of every electric vehicle.

The survey found that 58 percent oppose the plan, while 13 percent remain undecided.

And make no mistake, without subsidies solar, electric vehicles, wind power and other alternatives remain a chimera.

“Steven Cortes, CNBC contributor and founder of Veracruz Research, also sees solar stocks declining further and wonders about the impact of the recent natural gas boom on the sector.

“’As much as I love sun, I hate the solar space. This is not a real business, it’s a political construct,’” Cortes said on Fast Money Wednesday. “’And they can’t compete with natural gas at these levels.’”

According to the Associated Press the U.S. now has 2.433 trillion cubic feet in storage.

“That figure is 48.3 percent more than the five-year average, the Energy Department said,” reports the AP. “Natural gas fell 3 cents to finish at $2.27 per 1,000 cubic feet in New York. The price has fallen about 27 percent this year and is at the lowest level in a decade.”

Last week Abound Solar announced it would lay off half its workforce despite receiving a $400 million loan guarantee from the Department of Energy last year. The rating agency Fitch’s hit Abound over failures to meet stated goals, old technology, calling the company “highly speculative” according to ABCNews.

It remains way too early to determine whether Abound is poised to follow the trajectory of the best-known solar manufacturer to receive a sizeable government loan -- Solyndra, the California firm that filed for bankruptcy in September after having burned through the bulk of its $535 million federal loan.

However, there is an old saying in the market that the tape doesn’t lie.

And the tape on solar companies is horrendous.

Once billed as the brain trust behind one of the largest solar projects ever- the Blythe Solar Power Project in California’s Coachella Valley- Solar Trust of America will end its government-sponsored Gong Show appearance with the tinny reverberation of failure that will echo for the whole industry.

“The Oakland-based company has held rights for the 1,000-megawatt Blythe Solar Power Project in the southern California desert,” writes Reuters, “which last April won a conditional commitment for a $2.1 billion loan guarantee from the U.S. Department of Energy. It is unclear how the bankruptcy will affect that project. Solar Trust did not receive the loan guarantee.”

While Obama administration was denied the opportunity to throw money at Solar Trust- only by the grace of the company’s own good judgment- make no mistake, Obama’s policy of throwing money at other of these uneconomic, sunshine and blue sky investments, is responsible for the bankruptcy as much as any other factor; actually, probably more so.

So far, the administration has made $34 billion in loan guarantees to various green energy projects, many of them in a solar industry already rocked by over-supply and poor economics.

What solar needs now is fewer start-ups, less investment, not more. And everyone outside of the government central-failures understands this. The more money that’s been thrown at solar, the smaller the industry has become.

In the second quarter of 2008 First Solar (Symbol: FSLR) briefly touched $300 per share. Today it trades at $27.49. That equals losses of about $24 billion in market capitalization in just four years.

In April of last year Trina Solar LTD (Symbol: TSL) was trading just under $30 and is now trading at about $7.31. Earnings estimates have gone in the last few months from Trina losing about 17 cents per share for 2012 to losing about 63 cents per share. 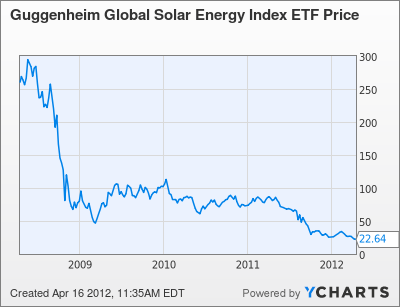 And the fundamentals aren’t getting better for solar soon, because solar can’t compete with coal-fired or nuclear generated electric.

“Fewer solar panels will be installed this year,” reports Bloomberg “as the first drop in more than a decade worsens a glut of the unsold devices that’s already slashed margins at the top five manufacturers, an analyst survey showed... Without government incentives, even record low prices for solar panels may not be cheap enough to encourage solar farm developers and homeowners to install them in the volumes needed to work through the glut, said Rozwadowski, the most pessimistic analyst in the survey. He expects installations to drop to 20.7 gigawatts.”

It’s important to note that the poor performance of the solar industry came at a time when government financial support has been at an all-time high world-wide. It only goes to show that politics and public policy are poor substitutes for free market economics.

Expect the solar industry to continue to crash and burn as government money continues to dry up along with public support.

Because there is no amount of money fakery that can cover the mess our fake president has made of his fake pet industry: solar power.