When Mitch Daniels claimed that Obama and his Energy Secretary Steven Chu have a “conscious” policy of raising gas prices, the super hero fact checkers at the Halls of Social Justice and Income Inequality Redress, also known as the Washington Post, swung into action.

“We can’t be sure why Daniels thinks the Obama administration had a ‘conscious policy’ of driving up gasoline prices,” writes Kessler disarmingly. “His office did not respond to questions about the matter.”

Remember it’s the first job of the environmental and hate-crime fighting Ambiguously Liberal Journalist to appear to be non-partisan.

A check mark for Kessler on that box.

The Post’s Fact Man continues to “appear” objective with his next paragraph too: “To the best of our knowledge, the president never said he wanted the cost of gasoline to rise. However, he did select Steven Chu to lead the Energy Department, and Chu clearly supported the idea of purposely raising prices — at least before he went to work for the federal government.”

We’ll get back to the last part in just a moment- you know the part where Obama picked a Secretary of Energy who advocated high gas prices as a good policy to follow?- but first, let’s do a simple internet search on Google under the string “higher gas prices obama a good thing.”

The results pick up a curious interaction in 2008 between CNBC's chief Washington correspondent John Harwood and then-Senator-Candidate Obama talking about gas prices:

HARWOOD: So could these high prices help us?

Sen. OBAMA: I think that I would have preferred a gradual adjustment. The fact that this is such a shock to American pocketbooks is not a good thing. But if we take some steps right now to help people make the adjustment, first of all by putting more money into their pockets, but also by encouraging the market to adapt to these new circumstances more quickly, particularly US automakers, then I think ultimately, we can come out of this stronger and have a more efficient energy policy than we do right now.

So in other words, higher prices are a good thing as long as the US government: 1) subsidizes energy prices for consumers; and 2) we end up with a “more efficient energy policy,” especially by encouraging automakers to adapt to the “new circumstances.”

The only bad thing about it, said Obama, was the “shock to American pocketbooks.”

This seems remarkably in line with the policies that president Obama is implementing through: 1) subsidies for energy in the form of tax credits for so-called renewables that puts “more money into [consumers] pockets” to offset higher prices; and 2) subsidies to the automakers to build alternative fuel vehicles to create a more “efficient energy policy.”

Those policies benefit from higher gas prices as then-Senator-Candidate Obama rightly judged when he was running for president. And as the Post observed in another appearance of objectivity: The Obama administration likes to brag that the United States relies less now on foreign crude than it has during any time in the past 16 years, but as we have noted this is not because of administration policies. The Energy Department has said the main reason is because consumption plunged because of the poor economy and because of changes in efficiency that began in 2006, before Obama became president.

The net result is an outcome that favors higher gasoline prices even if you’d like to cling to the thin argument that Obama didn’t intend it that way.

Proof? Prices of oil and gasoline are still rising despite slackened world-wide demand.

And of course if we dig deeper into Obama’s presidential campaign statements, we find that at least in the instance of coal, Obama did promise to make the cost of coal-fired power plants go up so high that power companies would become bankrupt as a result. The effort there was to curtail carbon output from coal-fired power plants.

So let’s just say that Obama doesn’t appear adverse to high energy prices, nor does his personal appointee as Secretary of Energy, Steven Chu, if it furthers their oft-stated policy goal of reducing carbon emissions.
And guess what else has a lot of carbon?

Coal’s partners in fossil fuel grime, oil and gasoline do.

It takes a certain amount of moral ambiguity for super hero, ambiguously liberal journalists to be blind to Obama’s hostility towards cheap fossil fuels.  Besides the decision-no-decision decision on the Keystone pipeline, by March of 2011 Obama had delayed or cancelled over 351 oil projects through permitting obstructions despite a federal court order to stop the practice.

If Obama didn’t want higher gas prices, he certainly accepted them for the greater good of his religion. 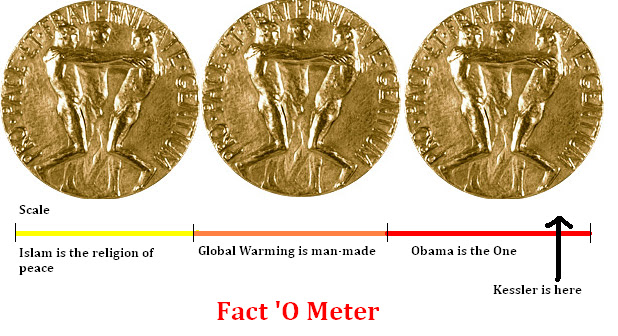 A simple Google search could have answered Kessler’s “We can’t be sure why Daniels thinks the Obama administration had a ‘conscious policy’ of driving up gasoline prices,” and his uncertainty expressed as “To the best of our knowledge, the president never said he wanted the cost of gasoline to rise,” with a click on one of the first few Google search video results.

And when a fourth Nobel Prize is manufactured for another prominent liberal for imaginary accomplishments in a quest for imaginary peace, we’ll upwardly adjust Kessler’s award accordingly.