John Ransom  |  Feb 04, 2012
The opinions expressed by columnists are their own and do not necessarily represent the views of Townhall.com.
Top Columns
Trending on Townhall Media

Another 1.2 million people dropped out the workforce, which means that Bureau of Labor Statistics (BLS) economists can say that unemployment has moved down to 8.3 percent without that messy job-creation thing getting in the way.

Last month when I wrote about the BS the BLS now uses to make unemployment go down, I did the math myself. This time around, I’m letting the folks from ZeroHedge and our contributor Mike Shedlock, do the math for me.

ZeroHedge says that if you add back in the 5 million people who have permanently dropped out the labor force, as reflected in the historical average workforce participations rates, the “implied” unemployment rate is 11.5 percent and rising, not falling. 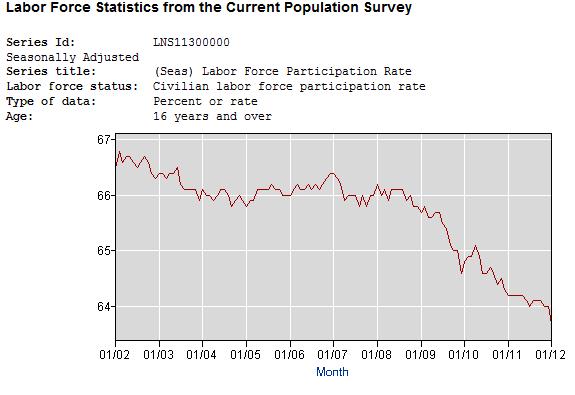 “It also means that the spread between the reported and implied unemployment rate just soared to a fresh 30 year high of 3.2%,” ZH say. “And that is how with a calculator and just one minute of math, one strips away countless hours of BLS propaganda.”

Last month ZeroHedge reported that the spread between the reported and implied unemployment rate was at 2.9 percent, then “the widest divergence to reported data since the early 1980s. And because we know this will be the next question, extending this lunacy, America will officially have no unemployed, when the Labor Force Participation rate hits 58.5%, which should be just before the presidential election.”

Indeed, that’s how the story gets worse from here.

Instead of the historic rate of 65.8 percent participation in the workforce, we are now at 63.7 percent. That means that we are literally years away from replacing jobs that we’ve lost since Obama became president. So many have lost heart looking for work that it’s going to be some time before they become candidates for employment again.

One of the few Wall Street economists who sees this is Lindsey Piegza, of FTN Financial in New York.

“It was a better-than-expected report, the strongest report that we've seen in quite some time,” Piegza told Reuters. “The big question is -- here's the thing: the reason we're seeing the unemployment rate drop is because more and more people are dropping out of the labor force. I know the market wants to rally on this number but remember we need a minimum of 250,000 just to cover demographic change. So we're almost at the place where we need to be to reabsorb the nine million people who lost their jobs during the Great Recession. This pushes the bar even higher for payrolls for the rest of this year. Given that the bar is so low we have to take this in the context that it's still not good enough."

As Piegza and others have pointed out, the 243,000 jobs that were reported aren’t enough to keep up with the number of people joining the labor force, yet alone, those who have lost their jobs.

“People should take it with a grain of salt,” Scott Brown, an economist with Raymond James and Associates of Saint Petersburg, FL, also told Reuters “since they are January figures and subject to revisions. We also had some unusually mild weather.”

In the end what it means is that wages in the US have been permanently reduced by $208 billion per year and counting so far. That’s about 1.5 percent of GDP just in wages, not counting anything that is actually produced by those workers. When you figure in total output subtracted from GDP from missing workers, the number is closer to 2.1 percent of GDP that’s permanently missing from our economy. That’s about $320 billion.

Even the most optimistic projections for Obama’s millionaires’ tax doesn’t come close to raising that amount.

In total over ten years, it means that the economy will miss about $20 trillion worth of GDP in those ten years, and between $3.4-$4 trillion in tax revenues unless we start to follow pro-growth policies that lead to job creation for someone other than major Obama donors.

See? And here I ended up doing some math anyway.

Now I have 20 trillion reasons plus one. And so do you.