John Ransom  |  Apr 25, 2011
The opinions expressed by columnists are their own and do not necessarily represent the views of Townhall.com.
Top Columns
Trending on Townhall Media

We need a new foreign policy and we need to spend a lot less money.

That’s the message stock market is telling us.

It’s a message painted in big bold letters and we’d be wise to read it.

We need a foreign policy that uses the proven lessons we learned from the Cold War; a policy that pares back our commitment of troops to combat operations.

We need a fiscal policy that we learned during the 30 years from the 1960s to 1990, when our economy only did well as we restrained government spending to an amount affordable by our GDP.

During the Cold War, in the best instances, we fought wars by proxy or we committed a limited amount of troops for a short period of time.

When we didn’t do that, we lost wars- a tie being the same as a loss in my book.

It was called containment. It was predicated on the belief that our system was superior to Communism and so, in the long run, our system would prevail. It was an optimistic way to wage war.

During the same period, we learned that when we restrain spending as a percentage of GDP, the economy does much better. It’s a fiscal policy that could also be known as containment. We contained the amount of power the government had. It maintained the power of individuals by limiting spending. It too was an optimistic system because it bolstered the freedom of the individual to make choices.

When we expanded the power of government and spent more money on government the economy didn’t do well. It was kind of a self-starting restraint on government.

The lesson came home to me as I was looking at a chart of stock market activity from 1950 to 2010. (See chart below).

When you look at the similar patterns they make on a chart, it’s spooky. One could practically lay one period over the other

In market lore, the period from the mid-Sixties until about the time Reagan was elected is known as the “lost decade.” And yes, we know it’s longer than ten years.

It followed a similar pattern that markets saw from 1929 to 1942 which was the original “lost decade.”

There was an unprecedented expansion of federal spending from 1965 to 1980. Federal spending went up 500 percent in that period. By 1983 it took up 23.5 percent of GDP. Spending as measured by GDP then started to move back downward, reaching a low of 18.2 percent in 2001. Then the trend began to reverse itself. The federal budget now stands at 24-25 percent of our GDP, with most of the increase coming in the last two years.

In the lost decade of the Sixties and Seventies we fought a war in Vietnam that commanded a sizable commitment of US troops- and US dollars- a war without an exit strategy. Obviously there is a correlation between wars we fight today in Iraq, Afghanistan and now Libya.

There was a polarization of political opinions back then too, with no room for compromise between socialist-Marxist ideology and conservative Capitalism; with the party of Aquarius asking “Can’t we all just make love, not war?”

Today we have the same three-sided argument between Islamists, Western-oriented Capitalists and multicultural Internationalist. The multiculturalists, who also happen to be socialists, will stand up for every right, except for the right to defend ourselves: “Can’t we all just get along?”

But we can battle in smarter ways.

I have no doubt that the superiority of our Western-oriented system will prevail in a long war with Islam. You and I have more in common, and are in more sympathy, with the average Muslim than those who would rule by Sharia.

My confidence rests in that.

Stock market prices say an awful lot about where we are as a country beside just how profitable companies are. It’s a kind of rolling opinion poll where investors express themselves with their money.

Over a long period of time, the stock markets tends to be correct in their expressions of confidence in government.

A decade of not hearing them is long enough. 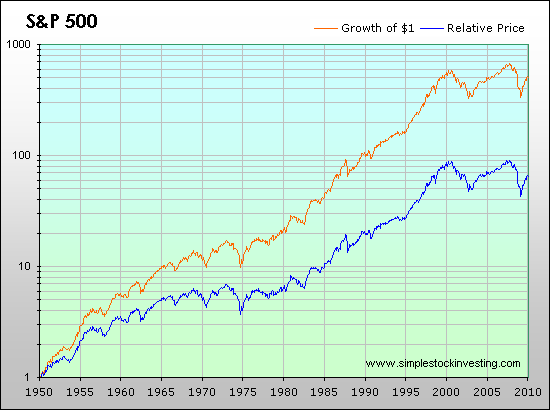