John P. Warren
|
Posted: Jul 31, 2016 10:00 AM
Share   Tweet
The opinions expressed by columnists are their own and do not necessarily represent the views of Townhall.com. 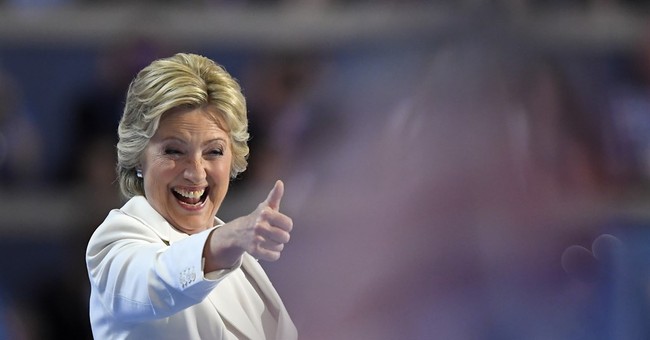 We could see the look in the faces of many at the festival of delusion in Philadelphia. It was utter adulation by her Kool-Aiders as one top-rank Democrat after another told them we made history once and we could make it again: elect the first woman POTUS.

As a retired executive who’s worked for, with, and in supervision of hard-driving, talented women who earned their stripes in the both the public and private sectors, nominating a woman for the presidency was underwhelming. Electing this woman will be a catastrophe. Hillary Clinton channeling Phyllis Diller with her wall-to-wall grin and horsebarn guffaws? With the late Ms. Diller, an accomplished comedienne, her instant, phony smile was part of the schtick. With Mrs. Clinton it’s just another part of the masquerade.

The party that calls itself Democratic thimble-rigged itself to present us someone disqualified to serve. Her purported service for children decades ago metamorphosed into service of self, a career of convenience and expediency, as illustrated by Benghazi and her recklessness with the nation’s secrets. The party gave us an historic moment in 2008 with an intelligent, articulate, and smooth community organizer who did much to us, little for us. Now, it gives us someone not terribly articulate, but an ill-tempered coattail rider who has checked the boxes on a seniority list.

Many seeing this convention with it’s A-list speakers and entertainment were impressed with the orchestrated fiction that the country is on the right track, people have never had it so good, and only Hillary Clinton can make it even better. If Trump wrote, The Art of the Deal, Mrs. Clinton and the Democrats could write, The Art of the Con. The magician’s trick of distraction while the trick is pulled is what’s at work now as Clinton and MSM (the Pravda of the DNC) try to induce us to believe Trump’s strawman ties with Putin somehow link him to hacks of the DNC servers. It takes our attention from the real story: the emails themselves and what the New York Times reported in April 2015: the $2.35 million in cash that flowed to the Clinton Foundation as an apparently direct result of Putin’s acquisition of Canada’s Uranium One, part of his attempt to corner the world’s supply—all approved by a committee under the direct control of our Secretary of State: Hillary Rodham Clinton. Chutzpah, thy name is Clinton.

Rather than investigate the DNC hacks, perhaps the FBI would like to scrutinize the apparent Pay-to-Play scheme of the Clintons that gave certain nuclear advantages to Mr. Putin and put our nation at potentially greater risk.

The other shell game played ad nauseam since the close of the conventions has to do with temperament. There’s no doubt that with Trump, what you see is what you get. He is the unvarnished, slivered oak that gives us a splinter whenever he speaks without a filter. Yet, one could easily argue that for him to be as dangerously unbalanced as Clinton and her surrogates pretend—to use Bill Clinton’s phrase—doesn’t square with the reality of a highly successful, productive businessman who built a career spanning several decades with no record of mal-tempered behavior anywhere.

anecdotes of an unhinged personality screaming obscenities at her husband, throwing objects, and perhaps, if true, physically assaulting her husband-president, should be enough to give one permanent pause about her temperament. Byrne reported the Secret Service actively considered what actions they might take to restrain her if she attempted to injure him during one of her rants.

There are better ways to make history:

Immigration & Jobs: These two issues have always been tied together. Factories go to Mexico and take jobs with them. Illegals float here and take service and construction jobs from Americans and legitimate immigrants trying to climb success’s ladder. There’s room to negotiate while we secure our borders and make intelligent choices about who should be part of our national family. Let’s incentivize corporations to stay here, pay a good wage, and put our people to work, especially in those areas where jobs will mean the difference between a decent life or a welfare existence. Trump understands how important this is. Clinton will do little or nothing—except create new government jobs—for fear of offending her constituencies.

ISIS: Right now, it’s almost the old policy of détente against the Russians. Our policy is: Don’t bother us or we’ll condemn your acts with the strongest possible words. How’s that working? Let’s decide to rid ourselves of this scourge. Trump gets this. Clinton had her turn at bat and fouled out.

Healthcare: Let’s stop calling it Obamacare except in derision for its high cost to Uncle Sam and millions of others. Create competitive circumstances so that everyone who wants it can get basic, low-cost health care, and make available upgrade packages for those who wish to take advantage of them, but get USG out of the business and ease the crazy regs on non-profits, small businesses, and bonafide religious groups.

Racial Matters: Respect for all is everybody’s responsibility. We fought a civil war to prove the point. It starts at the top—and everyone taking a public paycheck must set the example or get out. Require a high school diploma for everyone. Insist on skill training. Raise expectations. If Trump can wrap his head around this, he’ll make it happen. Clinton will only pander.

The first and best way to make history in 2016 will be to elect someone who has never been a professional politician but who has had to fight his way to success in a real world without the never-get-fired protections of Mrs. Clinton’s pampered life of “service.” Despite his personality shortcomings, Donald Trump might for the first time in nearly a decade put America first in stature, security, and jobs. Let’s make real history in November.