What Carly Said About Life 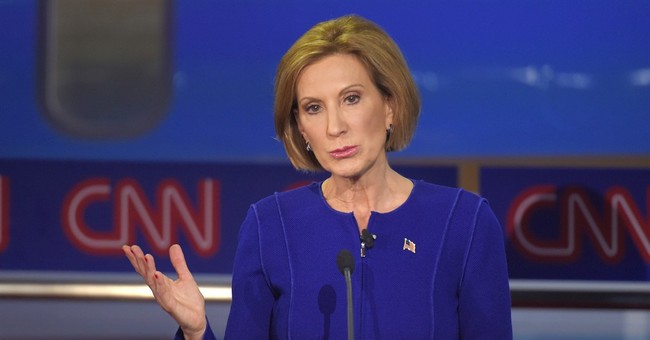 And she dared. As a woman who’d earned the right to be on a stage historically dominated by men, Carly Fiorina dared to speak for those aborted alive, for the most basic right denied them by progressives: the right to live. She didn’t have to raise the topic at all, but she was the perfect candidate to have done so.

She dared Barack Obama and Hillary Clinton, and by extension, Nancy Pelosi, Harry Reid, and all those pseudo-champions of women to watch the video of a near-term child whose life is snuffed out for the convenience of its careless carrier. While Ms. Fiorina and the rest of us could wonder why the likes of Obama et al. might never feel compelled to see the consequences of their policies, a few evenings after the September 16th debates I began to understand.

It was in a talk given by Dr. John Sparks, former Dean of the Calderwood School at Grove City College, in Pennsylvania, that he spoke about the culture of faith and freedom in a world where many in leadership roles are driven by something called postmodern thought. Stated simply, and I hope correctly, Dr. Sparks’s incisive analysis showed that postmoderns do not find any worldview worthy of belief, which means there’s no use for a philosophy about our existence, one which, “tells us who we are; how we are to live; how we fit into the grand scheme of things.”

Consider further an article to which Dr. Sparks referred, which appeared in the September 27-October 3, 2014 issue of The Economist. It wascalled, “What is the Point,” and itemized responses to the question put to a panel of purportedly learned persons: What is the point of life? One panelist, a woman, responded with, “Perhaps the wisest thing we could try to do is make peace with pointlessness.” A male participant offered this: “Meaning is constructed by each person after her own fashion, his own nature; there is no universal formula or divine plan…”

Thinking about it, the reason Obama-Clinton-Pelosi-Reid types see no purpose in viewing the videos is that they do not share the worldview familiar to many of us. To them, a single life is, at base, irrelevant, pointless. While they cry about women’s rights, it’s not about them at all, but about their votes, and nothing more than what’s convenient and situationally satisfying in a grab what you can world.

A postmodern view also explains, for example, their glib, automatic responses regarding the 2012 murders of Americans in Benghazi by terrorists. They were expendable in service to the mantra that, “GM is alive, bin Laden is dead, and al Qaeda is on the run.” According to the president, their murders were simply, “not optimal,” and to Hillary, “What difference does it make, anyway?”

While Carly Fiorina didn’t say all of this, thoughtful listeners to her forceful, focused, dare Wednesday last carried some or all of the above in the parade of memories flooding the moment for her and for us.

What she said in those few words resonated with so many millions because she told us that those born alive, viable infants are not mere harvestable things for experimenting cannibals, but human children with rights that are inalienable. Not postmodern irrelevancies, their lives matter, life matters, we matter.

With viability outside the womb pegged at around the 26th week and using 1% on average, that “means something on the order of 560,000 infant’s lives were terminated,” the overwhelming number of them viable and likely to survive birth, even if traumatically induced. That’s about the same number as the entire population of Washington, DC, in the year 2000.

Now comes the attempt to defund Planned Parenthood and if the progressives and State Media have their way, Republicans will be seen as shutting down the government because of their right wing stance on abortion. The loudest GOP contenders, Ms. Fiorina first amongst them, should make it clear it is the progressives who risk shutting down the government for the sole purpose of funding the butcher shop grotesquerie masquerading as women’s healthcare, care that can be provided by over 10,000 other organizations across the country. As important as health care is for women, progressives would put so many at risk for that one foul purpose?

The little person’s brief life, as described by Ms. Fiorina, was never intended to have begun, and in truth, there were no caring hands to cradle it with love, no chance to survive its lonely bid for life.

If she chooses to do so, she might proclaim, as did the GOP candidate for president in Turnover, when referring to third trimester abortions: “It’s not about women’s rights. It’s about human rights.”