Johnny Kampis
|
Posted: Aug 04, 2020 10:18 AM
Share   Tweet
The opinions expressed by columnists are their own and do not necessarily represent the views of Townhall.com. 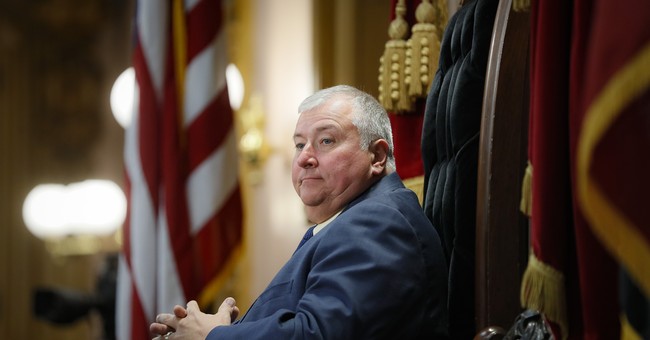 Bribery scandals in two states involving energy companies and lawmakers serve as cautionary tales about money in state politics and the bipartisan nature of corruption.

Ohio Speaker of the House Larry Householder, a Republican, and four other political operatives were arrested in July in a bribery scandal. A federal criminal complaint states that an energy company (later revealed to be Akron-based FirstEnergy Solutions) paid Householder and the operatives $61 million so they would secure the company a taxpayer bailout of more than $1 billion for its two nuclear power plants along Lake Erie.

The Columbus Post Dispatch reported that Householder was accused of a conspiracy that involved funneling energy company funds through a dark money group called Generation Now formed by a longtime associate of his. Some of that money was allegedly used to fund the campaigns of legislative candidates who were allies of Householder. Some of it went into Householder’s pockets, federal prosecutors said.

U.S. Attorney Dave DeVillers said this was “likely the largest bribery, money-laundering scheme ever perpetrated against the people of Ohio.”

Householder faces up to 20 years in prison.

The federal criminal complaint said the bribes were paid through the dark money group in an attempt to shield them from scrutiny.

“The millions paid into the entity were akin to bags of cash — unlike campaign or PAC contributions, they were not regulated, not reported, not subject to public scrutiny — and the enterprise freely spent the bribe payments to further the enterprise’s political interests and to enrich themselves,” the complaint said.

Chris Hoffman, special agent in charge of the FBI’s Cincinnati field office, called the bribery scheme a “shameful betrayal of the public trust.”

“Today’s announcement comes with a warning: From the city council to the Statehouse, all forms of public corruption are unacceptable,” he said.

The U.S. Justice Department also announced that Chicago-based Commonwealth Edison will pay a $200 million fine for its attempts to bribe Illinois Speaker of the House Michael Madigan, a Democrat.

John R. Lausch, Jr., U.S. attorney for Northern Illinois, said that ComEd attempted to influence the Illinois Legislature through Madigan for a decade and that the Speaker successfully pushed legislation to change how gas and electric utility rates are set in the state. That benefitted ComEd to the tune of $150 million, Lausch said.

Madigan, who has been in his post since 1987, was not charged by federal prosecutors, but Lausch hinted that an investigation into Madigan may be ongoing. The statement from the Justice Department said that ComEd admitted to arranging jobs, vendor subcontracts and cash payments to those in Madigan’s circle “to influence and reward the official’s efforts to assist ComEd with respect to legislation concerning ComEd and its business.”

The Justice Department also said that ComEd appointed an individual to its board of directors at Madigan’s request and used a law firm at his suggestion.

In addition to the fine, ComEd must cooperate with federal investigators for three years and satisfy certain conditions for a pending criminal charge to be dropped.

Maryland state Sen. Brian J. Feldman (D-Montgomery) told Maryland Matters the scandals show how much money floats around in the energy industry and why close checks should be kept to ensure ethics are upheld.

“It’s a wake-up call yet again about money in politics,” Feldman said. “It reinforces a theme that we’ve dealt with in Maryland for the last couple of years. And as policymakers, we have to be particularly careful.”

These alleged crimes also serve as a reminder that transparency is integral in keeping public officials in check. We must hold bureaucrats accountable for the taxpayer money in which we entrust them so that it is spent wisely and not used instead to line the pockets of shady lawmakers or business people.