John Nantz
|
Posted: Mar 17, 2016 12:01 AM
Share   Tweet
The opinions expressed by columnists are their own and do not necessarily represent the views of Townhall.com. 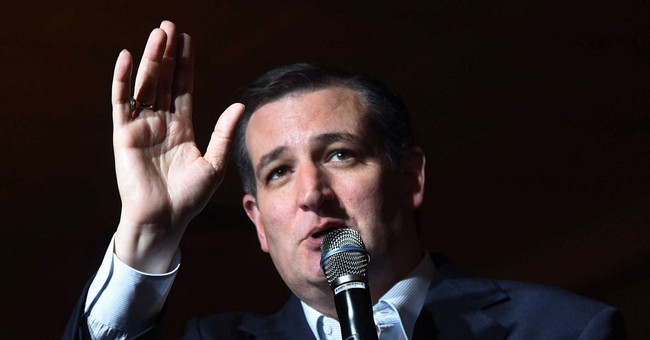 Only one Republican candidate has a record of doing exactly what he says he's going to do. In an earlier time, this was widely understood as integrity, the unimpeachable surety for pledges made on the campaign trail. And, only one Republican candidate passionately, genuinely, and faithfully, pursues the golden precepts of constitutional liberty which are the only safeguards of our pursuit of happiness within the judicious bounds of the civil society. Ted Cruz is a champion of economic, social, and religious liberty such as has not been seen since the Reagan revolution.

While his emphasis on religious liberty and unabashed Christianity strikes chords of anxiety with some, Christianity's only tool of coercion is the gentle goad of love. Christ's only demand is to love God with all your heart, soul, and mind; and to love your neighbor as yourself. Christ declared that all the law and the prophets are contained in what we have come to know as the golden rule--the moral basis of the civil society. But, the edicts of liberalism, as embodied in the political machinery of the Democrat Party, can only be enforced by threats followed closely by the brutality of an ascendant and consuming bureaucracy, exercising its monopoly on judicial, legislative, and police force while it belches the dehumanizing pumice of secularism.

Ted Cruz has pledged his oath, on an honor unblemished, to abolish the most oppressive bureaucracies that the conniving and diabolical Democrat Party has managed to conjure and accrete from the acrid fumes of Hades--the Environmental Protection Agency and the Internal Revenue Service. He has pledged to release the economic power of business by striking the chains of confiscatory taxation and has pledged to free citizens turned serf whose substance has been consumed by the canker of progressive taxation. While Obama has surreptitiously undermined and dilapidated our military in a pathological quest to reduce American grandeur to the squalor of global commonality, Ted Cruz seeks to pursue a policy of rebuilding our military in much the same way as Reagan was obliged to reconstruct a once proud military from the ruins left by another Democrat failure, Jimmy Carter.

Cruz seeks to enforce our current immigration laws and to defeat any effort seeking amnesty. He has purposed to renew a friendship with the state of Israel and to repair the breaches and offenses perpetrated by an anti-Semitic Obama administration. He has promised to rescind the unconscionable "agreement" with Iran that virtually ensures a nuclear capability under the control of a terrorist state--to reverse Obama's retrograde penchant for all things Islam and rebalance the power in the Middle East, favoring the free democracy of Israel and binding the slavish kingdoms of Mohammed. And, Cruz has pledged to repeal every word of Obamacare which has proved to be an unmitigated health care disaster.

But, for all this evangelicals and conservatives seem bent on destruction. Befuddled by notions of compromise, moderation, and the liberal Trojan horse of "reaching across the aisle," the benighted conservative movement is poised, once again, to commit fratricide, while jeering liberals bask in the warmth radiated from the movement's self-immolation. The incessant barrage of everything Trump, mortared into living rooms all across the fruited plain by Fox News and the rest of the ratings-rabid media, has created a perception that conservatives are presented with only two choices. It’s either Trump, packaged and labeled as “the outsider,” and the other establishment politicians. But, merely having served in Washington, doesn't necessarily an insider make.

The archetypical outsider, Jefferson Smith, whose beloved character was brought to life by James Stewart in the classic film, Mr. Smith Goes to Washington, finds his real world, technicolor analog in Sen. Ted Cruz. Jefferson Smith was a sterling citizen and head of the Boy Rangers, a youth organization instilling purpose and character in America’s youth through immersion in God’s vast and articulate creation. Through a providential twist of fate, Smith is nominated to replace his state’s senator. Smith is an idealist in the same way our founders were. Smith's idealism is not a naiveté but a conviction rooted in practical knowledge. He's of the people and feels the wisdom inherent in a closeness to the natural and invisible processes of the free market and constitutionally constrained government. What he does not anticipate is the gross and calloused institutionalism of a corrupt Washington or its parasitic remoras, the Washington press corps leeching and sucking at the great, bureaucratic leviathan. What was true in 1939 is still true today. The eel-like creatures were personified in the Diz Moore character who aped Pontius Pilate and snipped at Mr. Smith, "what is truth?" Washington insiders still mock at truth and twist fact into fiction. The film culminates in Mr. Smith's filibuster that thwarts graft and corruption seeking to deprive the Boy Rangers of a pristine site for summer camps.

Except for a few details, Ted Cruz could be transposed on Mr. Smith's character without much alteration to plot. In fact, Cruz engaged in a 21-hour Smith-like filibuster, seeking to bar passage of Obamacare. In doing so, Cruz won the ire of the entire Washington establishment and cemented his reputation as an outsider. Another establishment pariah, Rush Limbaugh, has described Cruz as the modern day incarnation of Ronald Reagan. And, recently, national radio host and author Mark Levin has given Ted Cruz his unequivocal endorsement. This is hardly the resume of a Washington insider.

In a bizarre twist of irony, those who have preached purity of principle for decades are ready to cut and run from a candidate whose reputation is based on adherence to principle and keeping his word. Principled conservatism has become an epithet and regarded as radical or purist. Cruz is a purist in the same sense as our founding fathers--he refuses to moderate on the constitution and the principles of Liberty that it embodies. Cruz is eminently electable if conservatives rally to him. The Democrats have put forward candidates that are profoundly flawed and that will be defenseless before our Harvard debate champion. Cruz isn't just good at argument and articulating conservative principles, he believes in them and will champion them to our long lasting benefit and to the benefit of a world left a prey to tyrants and zealots. The generations to come will rightly deride us if we neglect the Reagan of our time and waste this opportunity on a candidate with no path to nomination or on a candidate with no firm grasp on constitutional principle.