John Nantz
|
Posted: Feb 28, 2016 12:01 AM
Share   Tweet
The opinions expressed by columnists are their own and do not necessarily represent the views of Townhall.com. 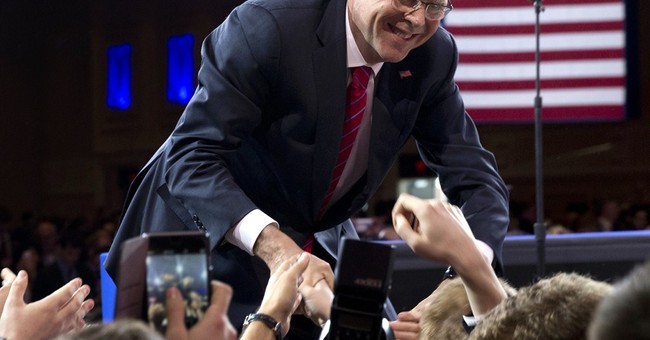 When people think of landmarks in political history the Grecian Senate comes to mind, learned men debating in colonnaded halls of marble; Rome with its noble but contorted spasms of democracy, terminating in the butchery of mad and tyrannical Caesars; and, the golden experiment of the American founding, men of genius and faith who gave birth to a Constitutional Republic sublime in its balanced complexity and reliance on Divine principle.

Greenville, South Carolina may seem like an unlikely venue for political epoch, but the intersection of Main Street and Coffee Street is a burgeoning crossroads, whose leafy sidewalks are frequented by serious academics, dapper entrepreneurs, nouveau-hip artists, thoughtful restauranteurs, and national political theorists. Among the helpings of grits and carafes of sweet tea, you'll find the politically astute Constitutionalists in the mold of Buckley, with the intellectual acumen and theological alacrity that the founding fathers wielded to such profound effect. It’s a town filled with people who love art, thought, and politics—it seems National Geographic thinks so too.

In this milieu of eclectic commercial and intellectual enterprise, Conservative Review held its first annual convention on Thursday, February 18th. As with many events that later prove to be seismic in nature, this convocation of thoughtful conservatives formed an epicenter in political thought and commentary that will propagate in ever wider and more powerful waves. Approximately six thousand serious activists arrived for an event that proved to be intellectually muscular, lean, and focused on candidates, commentators, and political theorists without the personality cults and juvenile cliques that festoon other, older events. The Conservative Review Convention was characterized by substance, by Constitutionalism, and by faith--celebrity gave place to cause and produced the germ of a grass roots movement.

The irascible Michelle Malkin served as host for the event and punctuated the proceedings with  her trademark acerbic and insightful wit. Malkin quipped, "The role of government is not handing out candy." And, with this, succinctly reduced the towering construct of the great society to a prepubescent lust for sugar. Surely, the nanny state has made diapered infants of its wards.

The headliners of the Conservative Review Convention included Matt Kibbe, who underscored the principled laissez-faire of conservative thought by recognizing that "Democracy is about giving people more choices," in contradiction to the collectivist model of Bernie Sanders, which imposes the tyranny of statist control. "Socialism kills. Just say no" was Kibbe's reduction of the Sanders’ plank promising free everything. Representative Dave Brat took the stage next and hammered home the foundational truth that Judeo-Christian history and doctrine have formed the basis for our Republic and for the civil rights that every American enjoys today. David Limbaugh delivered a crushing retort to the ubiquitous Democrat tactic of demonization. Limbaugh asserted logically, “There’s nothing extreme about the Constitution and Liberty.” And, Senator Mike Lee delivered this probative maxim, “Anger is not an agenda.”

As is typical of conservative constituencies, all the speakers were received with interest and respect. Dr. Ben Carson commented on the scourge of secular progressivism and its success in beating down people with common sense. He rallied the crowd with a call to “stand up and get loud,” observing that “other countries have nightmares, but no one else has a dream.” Certainly, Dr. Carson exemplifies the American dream. Though most attendees seemed to hold Senator Ted Cruz as their favorite choice, Dr. Carson received a warm standing ovation at the end of his remarks.

Dan Bongino, a former Secret Service agent, author, and Senior Contributor for Conservative Review rightly diagnosed the Liberal paradox. While Liberalism claims to offer limitless freedoms, its mechanism is freedom’s antithesis. Bongino stated succinctly, “Government force is the narrative that binds the Left together.” In a perverse irony, Liberalism tantalizes with the mirage of complete license, while binding its devotees in fealty to the state. No matter how much man may contrive, the natural law cannot be abrogated. License leads to slavery in one form or another, and the tyranny of sameness eventually touches us all.

The evening approached its crescendo as Senator Ted Cruz walked across the stage to a standing ovation from thousands of supporters. Cruz wasted no time in hammering home his primary point that our nation totters merely one Supreme Court Justice away from Liberal domination. Cruz asserted that so many Supreme Court decisions would have been and could be radically changed by just one vote; that UN domination, subjection to the World Court, the Second Amendment, and religious liberties would certainly hang in the balance. To our military, much maligned and abused by the Obama administration, Cruz declared that if elected president, “you will have a Commander-In-Chief who will have your back.”

Finally, Mark Levin, Editor-In-Chief of Conservative Review, nationally known radio commentator, and author took the stage culminating an evening celebrating ideas and not party; truth, not propaganda. Levin read his speech, but his passion for Liberty was electric and evident in the rapt attention and fraternal exhortations from the audience. He declared, “We are not anarchists, but constitutionalists and seek to reclaim our country from those who screwed it up!” To cheers Levin continued, “We are the progeny of the American Revolution. We are the children and grandchildren of those who defeated Tojo, Mussolini, and Hitler!” And, Levin made poignant the observation that our founding fathers did not risk their lives and fortunes to secure the entitlement of food stamps for their posterity, but rather Liberty.

In conjunction with the first annual convention, Levin announced the launch of LevinTV. Described as a national town hall, LevinTV is a subscriber based show with Mark Levin as host. Levin stated that he’s not interested in being “fair and balanced,” but that his show will feature a serious constitutionalism, in depth guest interviews, and thorough discussion of current issues without commercial interference or regard for network mandates. The new show is scheduled to launch on March 7th. The show is not intended to compete with the networks, but is intended to provide a constitutionalist alternative with the same Levin perspective that millions have come to love from his national radio show.

The first annual Conservative Review Convention can only be described as the place to be for those who are serious about preserving our irreplaceable constitutional republic. It was an inspirational meeting of like minded patriots who are committed to faith and liberty. It can certainly be said that the founding fathers would have been proud to attend this unique gathering and find that the flame of freedom still burns in the hearts of so many of their countrymen.