Without My Rifle, I Am Useless 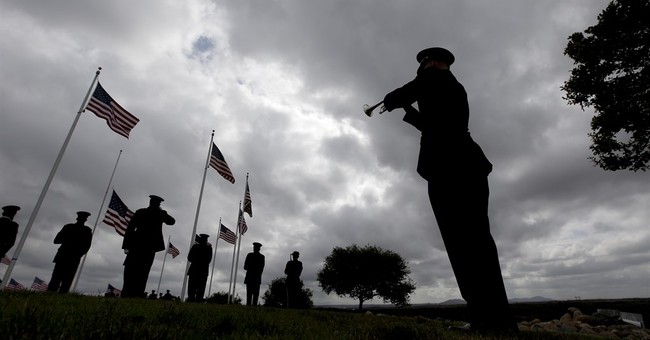 This is my rifle. There are many like it, but this one is mine.

Did the Rifleman’s Creed flash through the minds of Sergeant Carson A. Holmquist, Gunnery Sergeant Thomas Sullivan, Lance Corporal Squire K. Wells, Staff Sergeant David A. Wyatt, and Petty Officer Second Class Randall Smith as they were being fired upon by the cur Mohammad Youssef Abdulazeez? Could their thoughts have settled briefly upon the sentence, “Without my rifle, I am useless?” Of course, we’ll never know because they were slain by a Muslim terrorist in Chattanooga, Tennessee on Tuesday, the sixteenth. Their fates were sealed by the policies of a corrupt government, led by Democrats infected with Liberalism’s self-loathing, guilt, pacifism, and obsession with capitulation.

The Rifleman’s Creed was devised during WWII by Major General William H. Rupertus. Since then, it’s been inculcated into every United States Marine during basic training. Its ethos spans the armed services as it encapsulates the martial spirit, the discipline of arms, and the spiritual identification of warrior with weapon—concepts alien to and despised by Liberals blinded by a naive and gutless pacifism. For Liberals, the military is a hated institution because it represents the primary mechanism of American aggression and alleged imperialism. It is also one of the last bastions of American exceptionalism.

For the Liberal, America is the perennial bad guy, victimizing and oppressing weak third-world countries, growing rich by exploiting the resources of the rest of the world. Such a ridiculous notion does not bear up under even the slightest scrutiny. Everywhere the American soldier has been, he or she has brought the sacred fire of liberty, freed the oppressed, and then left to leave the fates of nations in the hands of its peoples. Ask yourself this question: who now holds the oil fields of Iraq? Not the American soldier. American imperialism is a fairytale for collectivist dupes.

My rifle, without me, is useless. Without my rifle, I am useless. I must fire my rifle true. I must shoot straighter than my enemy who is trying to kill me. I must shoot him before he shoots me. I will…

Liberals seek to disarm, dishonor, and diminish our military whenever and wherever possible. Not coincidentally, this agenda follows in parallel with the long term strategy of foreign subversives who themselves seek imperialist domination. Naivetéis the hallmark of Liberals, playing the part of useful idiot to the world’s despots. Secretary of State John Kerry is a recent example of this innate imbecility, as demonstrated by his shock and dismay regarding recent statements from Iran’s Ayatollah. Imagine! A genocidal dictator not placated by Obama’s flirtatious advances nor dissuaded from his megalomaniacal objective of establishing a world-wide caliphate by Kerry’s sincerest assurances of good intentions and good will. The result of this buffoonish diplomacy by capitulation will be a nuclear Iran, which our armed forces will be tasked to thwart—eventually. The ramifications of Liberal Democrat pacifism will propagate exponentially into future disaster for American position and prestige and will ultimately translate into military casualties when a future administration is forced to clean up Barack Hussein Obama’s mess.

Obama follows in the, old, worn Liberal dogma that is resurrected from the catacombs of failed politics every time a Democrat is elected. But, a moderate, President George H.W. Bush is responsible for DOD Directive 5210.56 which made most military instillations a “gun-free zone.” And, since that time, no president has taken action to change that directive. In fact, Bill Clinton took steps to make it almost impossible for commanders to issue firearms to their personnel. Even in the face of the Nidal Hassan terrorist attack at Fort Hood, no action has been taken despite a vast increase in threat. Obama’s continued intransigence on this issue is a sop to Liberal elites who peer down with disdain on those who volunteer to stand “on the wall” and defend our Republic from from wild-eyed primitives in the Middle East who make sex slaves of young girls, collect human heads like a macabre cult of witch doctors, and indiscriminately bomb innocents. Yet, they are subjected to the politics of “social justice” and “gun control.”

My rifle and I know that what counts in war is not the rounds we fire, the noise of our burst, nor the smoke we make. We know that it is the hits that count. We will hit…

The towering ignominy of the Chattanooga attack overshadows the White House and our national conscience. Our military men and women deserve to be armed at home. We entrust them with multi-million dollar weapons systems designed to inflict death on an unimaginable scale; they operate complex systems in the mind-numbing fog of battle, under the horrific stresses of combat, hurling grenades, grinding up the enemy with machine guns, or unleashing the hell of an M1A1 main battle tank—but, they can’t be trusted with a 9mm pistol in a desk drawer?

These men and women of valor endure the rigors of basic training and complete small arms qualification courses that would probably wash out ninety percent of concealed carry holders. They receive a level of firearms training commensurate with that provided to law enforcement officers who patrol our streets, schools, malls, hospitals, stadiums, and even the grounds of the White House. How then is it logical or morally defensible to deny firearms to people just as qualified to wear arms as law enforcement officers?

Furthermore, our military personnel here at home have been and are now under immediate threat from Jihadist operatives who receive direct inspiration from ISIS. And, so long as President Obama is unwilling to destroy the inspiration for “lone wolf” Jihadists, our military men and women will be in positions of jeopardy no less threatening than conditions faced on military instillations around the globe. The Israeli Defense Forces freely walk the streets armed with their service rifles and even lounge on the beach beside their arms. The American soldier is no less professional or conscientious.

You can send all the care packages you like, but if you endorse the defeatist policies and the decimation of draconian budget cuts you are just as anti-military as the 60’s hippies who now infest the American bureaucracy. And, the assertion that withdrawing service men and women from abroad is doing them a favor is merely a simpleton’s justification for capitulation. Ultimately, thwarting the military objective of accomplishing total victory only ensures that more lives will be lost as an implacable enemy regroups, restructures, and continues to seek its objective.

Before God, I swear this creed. My rifle and I are the defenders of my country. We are the masters of our enemy. We are the saviors of my life.

There is no real question that our service men and women are qualified to be armed at recruiting stations and on military instillations. It’s simply common sense. But, the problem with common sense is that it eludes a ruling elite who are infatuated with their own notions of grandiosity. It is time that the American people force the hand of a failed president.

So be it, until victory is America's and there is no enemy, but peace!