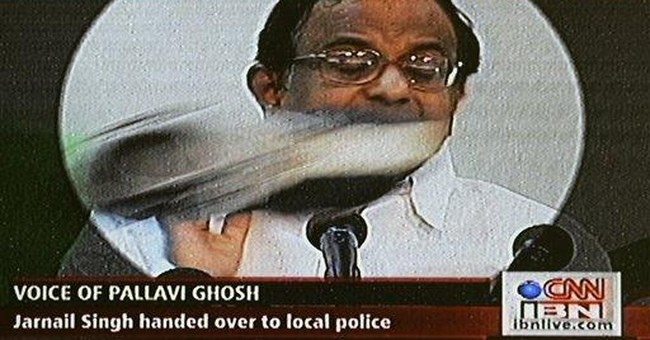 CNN anchor Rick Sanchez launched into a fit of editorializing last week by accusing a former CNN colleague, Glenn Beck, of contributing to the recent rash of mass killings in the United States.

”Who is stirring the pot?” Mr. Sanchez asked viewers. “Who is making people apoplectic?”

He went on to describe “the garden-variety fear- and hate-mongering provided compliments of Fox News, night in and night out. That's where Glenn Beck is seen, night after night, talking about doomsday, about the country coming apart. While his counterpart, Sean Hannity, calls the president a socialist, and worse, implying day in and day out, that he's trying to destroy America.”

Mr. Beck hosted a nightly news-commentary show on CNN until late last year, when he jumped ship to Fox News and attracted a much larger audience.

When interviewing Alan Gottlieb, founder of the Second Amendment Foundation, Mr. Sanchez accused Mr. Beck of spreading an unfounded fear among Americans that President Obama - “the nation's first minority, minority president,” the CNN anchor stressed, putting the emphasis on minority - is out to take their guns away.

”The bottom line,” Mr. Gottlieb reasoned, “is the Pew Research Center just did a survey that shows Barack Obama is the most polarizing president that we've had in four decades ...”

“But hold on,” Mr. Sanchez interrupted, “how could he not be polarizing when people are saying those messages that we have been talking about? If I was to get on the air and start saying horrible things about anyone, day in and day out, and scaring the 'bejesus' out of you, and telling you that the world is going to end as a result of this particular politician, whether he's on the right or the left or the middle, don't you think he would be polarizing?”

“Well,” answered Mr. Gottlieb, “I think maybe the media did that to George Bush, making for a good argument if what you are saying is true, maybe it wasn't Fox News. Maybe it was CNN and MSNBC.”

READ ALL ABOUT IT

"This action allows the American people to view historical records relating to the presidency and judge for themselves the actions of federal officials."

Or the acting archivist of the United States, Adrienne Thomas, chose to phrase it when announcing that 245,763 pages of Ronald Reagan and George H.W. Bush presidential records will be made public today at their respective presidential libraries.

Mr. Bush's library in College Station, Texas will release 797 pages of records dealing specifically with Saudi Arabia. Volumes were over the past two decades about the close relationship between the Bush family and Saudi royal family.

Mr. Reagan's library in Simi Valley, Calif., will open 244,966 pages of records processed in response to hundreds of Freedom of Information Act (FOIA) requests, including some 13,000 pages of declassified records on foreign policy.

We had to laugh as Sam Kazman, general counsel of the Competitive Enterprise Institute, and CEI senior fellow Eli Lehrer contemplated how the Preakness Stakes might escape Maryland [-] much in the manner the once-beloved Baltimore Colts football team sneaked out of the state under the cover of darkness.

To recap, a bill is being considered by the Maryland legislature that would attempt to seize the Preakness Stakes, the second race in the Triple Crown of thoroughbred racing, under the power of eminent domain, giving the state ownership of the host Pimlico Race Track, as well as the trophy, name and other properties associated with the preakness.

“Like the Baltimore Colts, the preakness ought to bolt,” said Mr. Kazman, who admitted "while there may be no problem transporting the horses, physically moving the track might be a bigger problem.”

“I’d suggest that the owners of Pimlico dismantle the track piece-by-piece, load it onto some trucks," offered Mr. Lehrer.

The previous item, while true, reminds this columnist of the time in 2004 when the Chinese newspaper Beijing Evening News reporting that the U.S. Congress was threatening to move out of Washington unless the U.S. Capitol was modernized with a retractable roof.

The embarrassed writer, Huang Ke, copied the entire story from The Onion, not realizing it was a satirical newspaper.