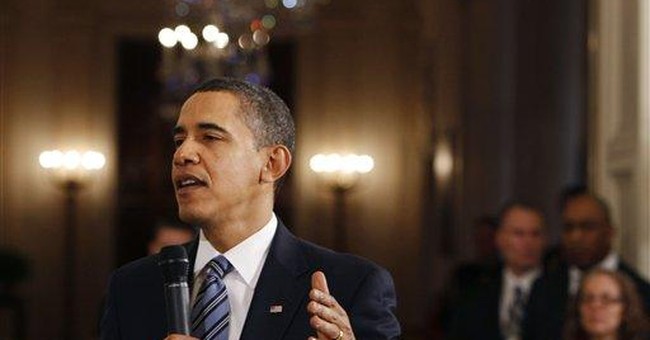 "We know that the road to our future is going to be long," he said. "We're going to hit our share of bumps and setbacks before it ends."

Former White House senior adviser Karl Rove certainly has found ways to remain in the spotlight - by his own choosing and otherwise.

"If Karl Rove wants to call someone arrogant, perhaps he and Dick Cheney should look in the mirror," reacted Democratic National Committee spokesman Brad Woodhouse, who blasted Mr. Rove and Co. for driving the American economy into the ground.

"This is the forensics firm that has been looking for 'lost' electronic data, mainly e-mails of Rove," Mr. Cooper noted. "This brings the total paid to Stroz up to $367,575, and that does not include the Covington Burling [legal] payments."

The costly search for the electronic mailings began after the RNC informed Congress that it was missing several years' worth of Mr. Rove's e-mails that are sought as part of a wider congressional investigation into the Bush administration.

Like Karl Rove, James Carville never leaves: "I've always said politics is like the circus: The worst job is cleaning up after the elephants. We're just beginning to find out how true that is," the former Clinton aide said Thursday while fundraising for the Democratic Party.

Mr. Carville argues that President Obama "has done more good in just eight weeks than George Bush did in his entire eight years."

"Well, I never!" writes Jack Webb of Springfield. "Here I thought my wife and I were alone - if not slightly nuts - in our little game with the forces beyond we affectionately called 'sticks,' the observation that, with freakish consistency, the clocks in the car, the bedside table, the oven, the computer, often read '11:11' when we glanced over at them.

"In fact, we'd gotten to the point of making sure we were safely in bed just as the clock became 'sticks' and officially ended our day on the correct note. To be late for that is ... well, it just isn't done. And now you're telling us other people have noticed this, too? You could have knocked me over with a feather when I read that blurb on Thursday. As Seinfeld once said in the midst of a crisis, 'The whole system is breaking down!' "

Regarding the new warning that eating cheeseburgers can shorten one's life, Linda Meyers of Arlington writes: "I loved your item on the contradictory 'evidence' about the benefits (or lack thereof) of eating more or less meat and other protein, versus vegetarian diets. My personal view is that David Harsanyi has it right: The 'nanny state' is turning us into a nation of children who can't (or aren't allowed to) make decisions for ourselves.

"At the risk of trotting out an old gag, it's not that vegetarians actually live longer than meat-eaters: It just feels that way. I wish your father many more cheeseburgers (and you, too)."