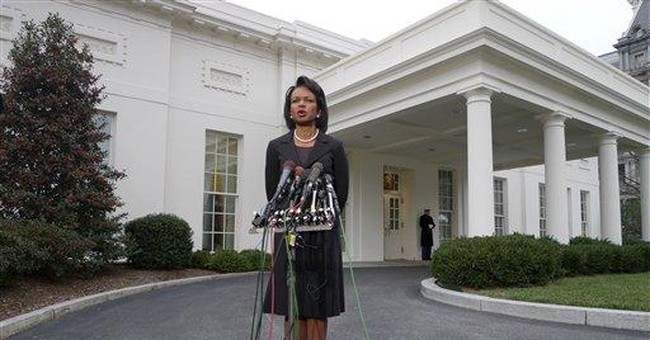 The Madison hotel on 15th Street Northwest is unveiling its own "Lincoln Bedroom" to commemorate the much-heralded inauguration of Barack Obama as the nation's 44th president.

The unique room features a full-sized bed with decorative headboard and footboard, copies of the Emancipation Proclamation and Gettysburg Address, even a replica of Abraham Lincoln's favorite rocking chair.

Unlike Barbra Streisand, Steven Spielberg, Jane Fonda and the thousands of other presidential "friends" who have overnighted in the White House Lincoln Bedroom, guests filling the hotel suite get to take home a keepsake set of Madison towels personalized, "I Slept in the Lincoln Bedroom."

Inside the Beltway earlier this week quoted the Joint Congressional Committee on Inaugural Ceremonies as advising inaugural-goers on Jan. 20 to wear winter coats, gloves, hats and scarves, and consider "bringing a blanket."

At which time our phone rang. It was acclaimed Washington designer Ann Hand calling to suggest what better blanket for Inauguration Day than the cozy red, white and blue, stars-and-stripes "Barack Obama 2009" blanket that she has created, available while they last at her pair of Ann Hand salons in Georgetown.

While we're in Georgetown, the new maitre d' at Hook restaurant is none other than Scottish-born Simon Pound, longtime director of dining services at Virginia's renowned Inn at Little Washington.

"It's nice to have a grocery around the corner," Mr. Pound tells Inside the Beltway of his big move to the city, having spent more than 15 years in the Virginia countryside.

Hook's new chef, meanwhile, is Jonathan Seningen, most recently of Le Paradou and Oya. Having grown up on Maryland's Eastern Shore, the chef, shall we say, is schooled in fish.

A third prominent member of the Hook team is Heather Chittum, named RAMMY's best pastry chef this year, as well as one of the five best pastry chefs in the nation. Where else can Georgetown diners find homemade gingerbread cake on a menu?

"'Most Used' Network Reporter of 2008" is the eye-catching headline of the latest Columbia Journalism Review, which recaps network-news watchdog Andrew Tyndall's "Year in Review 2008."

"If 2008 felt like The Year You Couldn't Escape Andrea Mitchell, that's in part because she was the year's 'most used' network reporter (excluding the anchors), clocking 355 minutes of air time for NBC," the story goes. "And Tyndall studies just ABC, CBS, and NBC, so imagine what this number would look like if it included all the minutes Mitchell logged on MSNBC."

More from Mr. Tyndall's report: "The Most Newsworthy Woman of the Year: Sarah Palin."

The Year's Most Newsworthy Man: Barack Obama, of course.

One of Harper's magazine's most popular features is its monthly Harper's Index, which this month is devoted to a rather unflattering retrospective of the George W. Bush era.

We don't have space to reprint all 41 facts, but here's an arguably one-sided recap of Mr. Bush's two terms, from start to finish:

• Percentage of Mr. Bush's first 189 appointees who also served in his father's administration: 42

• Years before becoming energy secretary that Spencer Abraham co-sponsored a bill to abolish the Department of Energy: 2

• Number of Chevron oil tankers named after Condoleezza Rice, at the time she became a foreign-policy adviser: 1

• Minimum number of calls the FBI received in fall 2001 from Utah residents claiming to have seen Osama bin Laden: 20

• Percentage of the amendments in the Bill of Rights that are violated by the USA Patriot Act, according to the ACLU: 50

• Percentage of Americans in 2006 who believed that U.S. Muslims should have to carry special IDs: 39

• Chance that an Iraq war veteran who has served two or more tours now has post-traumatic stress disorder: 1 in 4