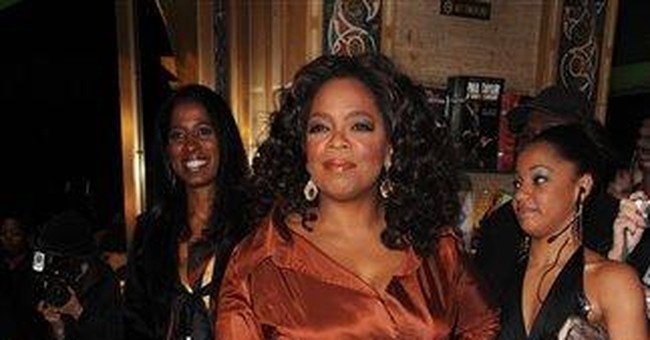 They couldn't have been too happy at Rosslyn's "Top of the Town," a conference and reception facility featuring a sweeping view across the Potomac River of Washington's landmarks and monuments, when the group that booked the lofty venue for Inauguration Day canceled at the "last minute" - and after Oprah Winfrey already had been turned away, no less.

"At this stage in the game, it's almost impossible to get anything close to this for inauguration with parking. We are opening it up to the best offer," said Nancy Goodman, vice president of Main Event Caterers. There's space for 180 people.

We had not realized until seeing the FBI's "Most Wanted" poster of Osama bin Laden that the terrorist mastermind sometimes goes by the alias "The Director" - not to be confused, obviously, with FBI Director Robert S. Mueller III.

Among other aliases of bin Laden's, according to the bureau: "The Prince" and "The Emir."

"Should be considered armed and dangerous," warns the poster, describing bin Laden as olive complexioned, standing 6-foot-4 to 6-foot-6-inches tall, 160 pounds, left-handed, and walks with a cane.

Anybody who uncovers his whereabouts (some U.S. intelligence operatives think bin Laden is dead) will be paid a State Department reward of $25 million, plus $2 million from the Air Line Pilots Association and Air Transport Association.

EBay auctioneers beware: yet another bill has been introduced in Congress to make it a crime to knowingly sell tickets to the presidential inaugural ceremony.

In addition, the proposal by Rep. Emanuel Cleaver II, Missouri Democrat, would make it a criminal act to produce counterfeit tickets for the Jan. 20 ceremony.

Several million inaugural-goers are expected to descend on Washington - "in some cases without a place to stay," the congressman notes - and tickets "should not be bought and sold to the highest bidder.

"Even worse are false promises of tickets that are made to individuals and families who are then left with empty pockets and tales of disillusion," Mr. Cleaver says.

Bidding farewell to retiring Virginia Republican Sen. John W. Warner "is a day I have dreaded," said West Virginia Sen. Robert C. Byrd, who has retained his U.S. Senate seat longer than any lawmaker in history - a half-century and counting.

"Senator Warner is one of my heroes," praised Mr. Byrd, which is quite a compliment from the outspoken Democrat and history buff, whose other heroes include Nathan Hale (he gave his life while spying on the British during the Revolutionary War), Francis Marion (the "Swamp Fox"), Nathanael Greene (a major general in the Continental Army), Daniel Morgan (another Revolutionary War standout), George Washington, Benjamin Franklin and James Madison.

And going back further, there is Polybius, Didorus, Dionysius of Halicarnassus, Cornelius Neopos, Gaius Sallustius Crispus and Titus Livius - "blood brothers" of the silver-haired senator.

Like Hale and Marion and Greene and Washington, Mr. Warner "has always displayed the timeless virtues of patriotism and selfless devotion to duty in defending our country," said Mr. Byrd, pointing out that at the ripe young age of 17 Mr. Warner enlisted in the U.S. Navy to serve in World War II, then came back as a U.S. Marine during the Korean war.

"[Y]ou'll love the way the federal bureaucrats make new cars," Rep. Ted Poe, Texas Republican, quipped Wednesday. "The new federalized auto industry will have the competence of FEMA, the pleasantries of the Post Office and the compassion of the IRS."

Given an estimated $7.7 trillion is being committed to bailouts sought by Treasury Secretary Henry M. Paulson Jr. and Federal Reserve Chairman Ben S. Bernanke, and some $1.2 trillion will be paid in individual income tax for the 2008 tax year, Rep. Louie Gohmert, Texas Republican, proposes Americans not pay federal taxes for January and February 2009.