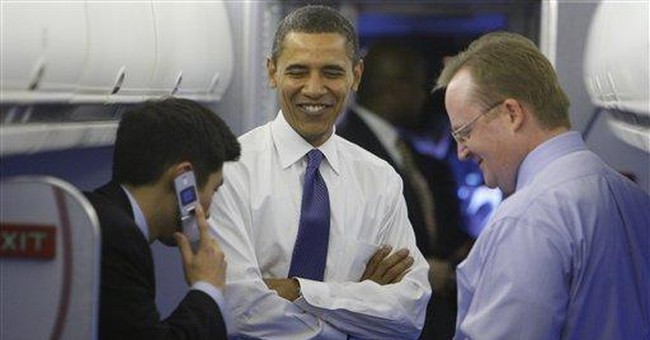 Now Inside the Beltway gets word from a source close to the Justice Department that Mr. Holder "is on the top of the list for attorney general."

When it comes to fixing the economy, House Majority Leader Steny H. Hoyer warns it's going to be a long, cold winter.

"It's not going to happen overnight, number one," the Maryland Democrat informs listeners of Inside the Beltway Radio (listen 24 hours at www.washingtontimes.com). "Number two, we've been working in a bipartisan way to make sure the economy did not fall into a depression."

"You talked about borrowing money from the Chinese," adds Mr. Hoyer. "We've borrowed more money from foreigners over the last eight years than we've borrowed in the entire previous history of our country. We've been on a binge of debt in government, in business and in consumer markets. So we need to get a fiscal handle on all three sectors. But we cannot do that until we get the economy stabilized."

SHOW ME THE MONEY

"I've been expecting President-elect Obama to announce the creation of a new, more powerful Cabinet position, replacing secretary of the Treasury: secretary of Redistribution."

Or so we overheard Robert L. Haught remark Tuesday, referring to Barack Obama's campaign pledge to "spread the wealth."

Mr. Haught, the recently-retired "Potomac Junction" columnist for the Oklahoman, is one of several notable authors participating in the 31st annual National Press Club Book Fair and Authors' Night, to be held Tuesday, Nov. 18.

The book fair, featuring fiction and nonfiction, children's books, cookbooks and more, is open to the general public from 6 to 8:30 p.m. Tickets are $5 (free to club members) and the funds raised benefit the club's National Journalism Library. The National Press Club is located at the corner of 14th and F streets (two blocks from Metro Center).

They can start by bringing in some furniture.

"One of the interesting things about the vice president's house is that it doesn't have much furniture," Lynne Cheney, wife of Vice President Dick Cheney, points out in a video tour of the mansion. "It's relatively new in the whole history of official houses."

Next stop, the mansion's sweeping entry hall, oval in shape and beautifully carpeted, yet virtually empty of furniture.

"So you can do lots of things in here - you can do somersaults and cartwheels," Mrs. Cheney suggests.

(Now we know how Mr. Cheney has kept in such good shape).