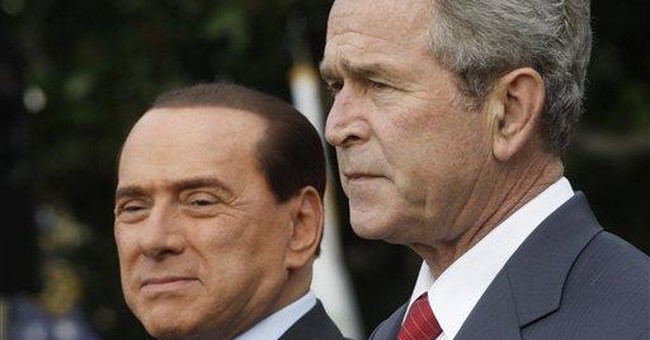 President Bush hereby proclaims today Columbus Day, calling upon the people of the United States to observe the Monday holiday with appropriate pomp and ceremony in honor of Christopher Columbus, who history books once taught discovered America.

Before issuing his Columbus Day proclamation, Mr. Bush proclaimed last Thursday Leif Erikson Day, calling upon all Americans to observe the day with appropriate programs to honor of the son of Iceland and grandson of Norway who, more than 1,000 years ago, "led a crew across the Atlantic to North America."

"Your pooler would like to extend a fashion apology - having described the first lady's garb this morning as a pant suit. Closer inspection reveals dark, probably black, slacks, and a dark brown waist-cut jacket over her blouse."

-White House pool reporter Mark Silva of the Chicago Tribune, when otherwise not writing about the worst week on Wall Street since the Great Depression

When not traversing the country as Sen. Barack Obama's vice-presidential running mate, Democratic Sen. Joseph R. Biden Jr. is campaigning for re-election to the U.S. Senate.

Delaware law allows that if Mr. Biden should not become the next veep, he can still keep his Senate seat - granted, of course, that he defeats his 2008 Republican challenger, Christine O'Donnell, who insists that Delaware, if not the country, suffers from "Biden Fatigue."

Or do they? The two most recent polls we found, Survey USA and Fairleigh Dickinson, show Mr. Biden ahead of Ms. O'Donnell 64 to 32, and 69 to 26, respectively.

It was on Oct. 19, 1983, that Jeremiah O'Leary, the longtime White House correspondent for The Washington Times and a former U.S. Marine, stood up during a televised press conference and asked President Reagan why several hundred Marines had set up a peacekeeping base on flat terrain in Beirut instead of taking higher ground.

Four days later, a truck carrying 2,500 pounds of TNT rammed the Marine headquarters, killing 241 American servicemen, mostly Marines. It was the most single-day casualties the corps had suffered since the Battle of Iwo Jima.

This Wednesday at 10 a.m., the National Museum of the Marine Corps in Virginia will unveil its newest exhibit, "Where Do We Get Such Men?" commemorating the 25th anniversary of the deadly attack in Lebanon. Among other distinguished military leaders, veterans of the Beirut deployment will be on hand.

We got a kick out of the FBI headquarters' Top Ten Myths in FBI History, one of them being that the bureau possesses so-called "X-Files," similar to the popular, albeit now-defunct, TV series.

"Yes, we do have files on some unusual phenomena - like cattle mutilation, UFOs and Roswell - but generally only because people reported something, and we made a note of it," the FBI states. "Some of the files do involve cases involving a potential violation of federal law under our jurisdiction that we did investigate.

"One example is Operation Majestic 12, the supposedly secret group of government officials tasked by President Truman to study the Roswell incident."

Referring, of course, to rumors that a UFO crashed near Roswell, N.M., on July 7, 1947, bodies were recovered, and a cover-up ensued.

"When what appeared to be a top-secret document about the formation of the Majestic 12 surfaced in the 1980s, we were asked to investigate a possible breach of classified information," the FBI notes. "The bureau concluded that the document was a fake."

"So, bottom line: while FBI agents chasing aliens and other supernatural creatures may make good entertainment, it's not part of our job description, and we don't have a secret collection of 'X-Files' squirreled away somewhere."