John Mac Ghlionn
|
Posted: Apr 01, 2021 12:01 AM
Share   Tweet
The opinions expressed by columnists are their own and do not necessarily represent the views of Townhall.com. 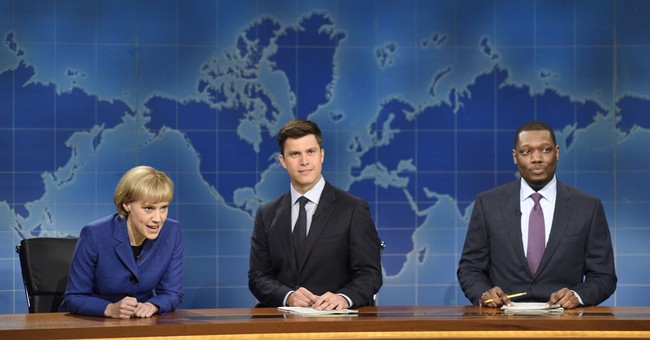 Plato treated laughter as something to be avoided at all costs; he considered it to be an emotion capable of nullifying one’s self-control.

The philosopher, one assumes, would very much approve of SNL, especially the latest episode, where a particularly unfunny segment stood out. It involved Bowen Yang, an Asian American comedian, and Colin Jost, a regular on the show since 2005. Yang was there to discuss the recent wave of anti-Asian hate crimes across the nation. He begins by saying the following: “things for Asian in this country have been bleak for the last two weeks…..and before that, forever.” This is a highly disingenuous point, unreflective of reality. Nevertheless, it goes unchallenged.

Then again, what could Colin Jost, who seems like an affable individual, really do? He is a “privileged,” white male, the very type of person Yang is there to castigate. Jost looks confused and more than a little afraid. The segment is highly reminiscent of Jimmy Kimmel’s self-flagellation at the most recent Emmys.

Jost asks what we – as in, white people - can do to help Asians in America. Yang responds, imploring white parents to feed their children “chicken feet.” One wonders how the consumption of chicken feet will help fight discrimination.

Yang continues, telling viewers that he can’t discuss the hatred shown towards Asians without discussing “class,” “gender,” and “imperialism.”

Really? Because SNL is the perfect outlet to discuss imperialism. Is this what the average viewer is tuning in for, to be lectured on the dangers of imperialism?

Unsurprisingly, Yang’s criticisms are largely misplaced. As Heather MacDonald recently highlighted in a fantastic piece for Quillette, the narrative that white people are the biggest perpetrators of violence against Asians is an erroneous one, not supported by actual data. However, in this age of feelings over facts, who cares about data? Facts are not funny. Then again, neither is SNL.

Correct me if I am wrong, but the purpose of comedy is to make people laugh, or at least it used to be. Instead, SNL producers spotted an opportunity to score woke, brownie points. They spotted an opportunity to deliver a poorly worded PSA disguised as a comedy sketch. Well, they failed, as this particular bit was neither informative nor was it funny. Just listen to the crowd. They don’t know whether to laugh or cry. They are caught somewhere between giggling and vomiting.

But, some may argue, stinging diatribes have always been a part of comedy. After all, Bill Hicks and George Carlin had plenty of issues with the country. Although this is true, both men had accumulated enough comedic capital to criticize America. These were legendary figures, and when they spoke, most people listened. Hicks and Carlin had put in the hours, earned the respect of their peers. In many ways, of all the comedians around at the time, they were two of the most qualified to preach to the masses. Who is Bowen Yang to lecture the American public? Who is Bowen Yang to tell American people to “do more”? Actually, who is Bowen Yang?

Bowen Yang is no Hicks or Carlin. He is, at best, an average comedian. Furthermore, he is an average comedian castigating millions of white viewers. How, in any way, is this acceptable? Perhaps, more importantly, how is this comedy?

SNL was once the Holy Grail of comedy. It was once a meritocracy, where only the best of the best, regardless of sex, race or skin color, made the cut. Funny wasn’t good enough. To get a spot on SNL, one had to be simply brilliant. This was a comedic colosseum, where great ideas battled it out for a five-minute segment. Gladiators like Eddie Murphy, Bill Murray, Adam Sandler, Steve Martin, Chris Farley, Amy Poehler, John Belushi, Billy Crystal, Tina Fey, and Steve Martin took to the stage. Truly brilliant comics delivering genuine moments of hilarity. No lecturing, just entertainment.

Those days, however, are long gone. SNL is no longer a meritocracy. If in doubt, ask yourself this: are the best comics and writers working on the show? Judging by the latest episode, the answer is clearly no.