How the Coronavirus Pandemic Brought One Big Family Together

John Kass
|
Posted: Apr 28, 2020 12:01 AM
Share   Tweet
The opinions expressed by columnists are their own and do not necessarily represent the views of Townhall.com. 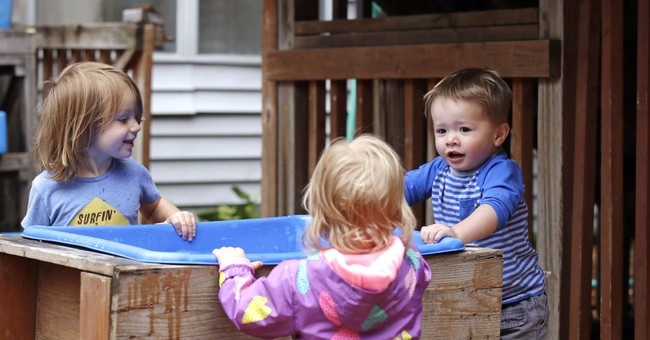 The first thing you have to know about Bruce and Cheryl Leon is that their newborn grandchild is a healthy 10-pound baby boy. His mom, their daughter, is doing well.

"We won't know the name until the bris," Cheryl told me on Friday. "But it's a boy. We know that. Another boy. We're learning a lot about boys."

The other thing about the Leon family involves the great coronavirus shutdown.

The Leons now live in a household of 10 -- make that 11 in a few days when the baby comes home -- and things are a bit crazy. That's probably why Cheryl said she was telling me her story while sitting in a closet.

"It's a good thing she was a crisis counselor," said Bruce. "Because it's been chaos around here. I mean, we had daughters. They're different than boys. Now the house is full of boys."

The Leons had been living quietly in the West Rogers Park neighborhood of Chicago. Two of their four daughters lived at home -- their youngest, Yael, is at a local college studying business, and Raina is a nurse at Northwestern Memorial Hospital.

Daughter Liat came home from a medical college in Westchester, New York, to hunker down with her family as the pandemic took hold.

And then the eldest, Ilana Langer, who was expecting a child, came home for Purim, the holiday just before Passover, along with her husband, Shimon Langer, a rabbinical student in Israel, and their three energetic little boys, Nosson, 4, Binyamin, 3, and Avraham, 20 months. And now the fourth son.

Ilana, Shimon and their boys were only going to stay six days. That was in early March. She planned to fly home to have her baby. But with the coronavirus restrictions, they couldn't return to Israel, and then she was too far into her pregnancy to fly. You want chaos? Just try to find an obstetrician when you're nine months pregnant. But she did.

Now there are 10 and soon to be 11 people in Cheryl's house.

"I'm not going crazy," said Cheryl. "Really I'm not. But I'm talking to you from inside a closet, so I have a moment. But we're blessed, really. Everybody's together, sorting out space issues, dealing with it. The boys run around, breaking things, but they're boys."

Yes, that's what they do, I said. That's why soccer was invented. You've got to run the ponies.

"Little boys don't like to sit. They're running around in the backyard now, and if they're inside, they're running," Cheryl said.

Yes, I said, being a big fan of boys and thinking of boys running.

"We're learning about boys. And our daughters are helping, my daughters love to cook, so everybody's pitching in. Our son-in-law, Shimon, he's been heroic. Can you imagine living with your in-laws for weeks and weeks? So, yeah, it has been a little chaotic. But isn't that family? And what's the alternative? There is no alternative. So, we're together. This is what family is all about."

Yes, that is exactly what family is all about.

And with all those people in the house, and the astronomical grocery bills and all those books and toys to pick up off the floor when the children fall asleep, and personalities clashing, eating meals in shifts, it sure sounds like a whole lot of family to me.

Cheryl and Bruce are readers of mine. With so much bleak coronavirus news flying about, she thought I might like a feel-good story. She was right. I needed their story.

It's the chaos I loved hearing about, the noise, the daughters taking their college classes on Zoom as their little nephews run past the screen, waving to the professors, the professors waving back. And Bruce stepping gingerly over toys. Beware of the plastic triceratops, Bruce.

They feed the little ones early. And when they're in bed, the adults sit down to dinner.

"A vacation that never ends," said Bruce, "and I'm getting blamed for spoiling the boys. Imagine that."

Cheryl's sanctuary is a closet. Bruce takes off for two or three hours each day to his empty office, where he runs a payroll outsourcing company.

"We're not complaining," Bruce said. "It's different than it was. But when it was quiet -- what, just a few weeks ago? -- I was saying that I didn't like the quiet in the house. And now? It's not quiet."

Many of us are too quiet, isolated in our homes, keeping distance, even from family. It's the quiet that hurts.

Betty and I live in our quaint Hobbit hole near the picturesque windmill with Zeus the Wonder Dog. Our two sons have their own apartment. My mom is now in a nursing home. My brothers and their families are in their own homes. We all meet by Zoom.

But a screen isn't the same as being in the same house, together, hugging each other, squabbling with one another. On screen we're quite polite and take turns. It's formal and therefore unnatural.

The Leons need not worry about the icy formality of Zoom. They aren't isolated. They're together, all crammed in the same house.

There are many other stories out there that might seem more important. But this is most important to me.

"Someday the house will be quiet, they'll be gone, I know what I'll miss," said Bruce. "I'll miss the boys rushing in the morning, jumping on our bed saying, 'Wake up! Wake up!' "

"This is what was intended," said Cheryl. "Nothing gives me more joy than when I lock the door at night and everyone I love is safe and everybody's home."

That's family. That's all there is, really.