John Kass
|
Posted: Oct 10, 2019 12:01 AM
Share   Tweet
The opinions expressed by columnists are their own and do not necessarily represent the views of Townhall.com. 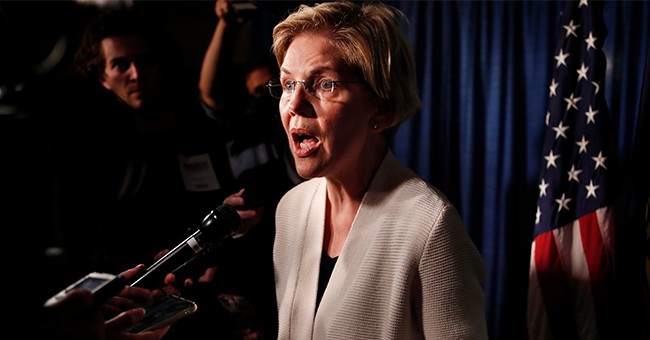 Sen. Elizabeth Warren of Massachusetts, the Democrat campaigning for president, has had two amazing creation myths to choose from.

One had her as a Native American, and the other as a young teacher forced out of her job because she was pregnant.

Many epic heroines, or heroes, have only one creation myth, as anyone who has who read Joseph Campbell's "The Hero with a Thousand Faces" can tell you.

Warren has just the one face. But each of her stories cast her as a victim.

Yet when it comes to creation myths, Sen. Two Tales has none.

Her first failed story was the one about Warren as a Cherokee. Her position on the Harvard Law faculty guaranteed her status as a true member of the nation's elite. And Harvard's law school proudly proclaimed her as an important minority hire. She leveraged her job at Harvard into a seat in the U.S. Senate.

Then President Donald Trump bluffed Warren into taking that disastrous DNA test. The results were embarrassing and awkward, because it turns out she's about as Cherokee as was my Papou Pete, born in the Greek mountain village of Manasi, on the other side of the world.

Yet even without her critical Cherokee card, she raced forward on the Intersectionality Highway, in that Hillary Clinton lane. She cut into Joe Biden's lead. Now they're virtually tied, according to the Real Clear Politics poll averages.

Just the other day, however, that other creation myth began to unravel. The story had become a cornerstone of her campaign.

It's the one Warren repeats endlessly, about being forced from her dream job as a special needs elementary school teacher in the early '70s because she was pregnant with her first child.

"But at the end of that first year, I was visibly pregnant," she said in the September Democratic debates. "And back in the day, that meant that the principal said to me -- wished me luck and hired someone else for the job."

The Democratic Party is ruled by identity politics, and victim status wins points and protection. Warren's story gave her room to shape-shift, from the Native American who wasn't to young mom victimized by the patriarchy.

It turns out, though, that she wasn't fired from her dream job as a teacher because she was pregnant.

Instead, as Warren herself explained in a taped 2007 interview at the University of California at Berkeley, she didn't have the necessary education courses to continue as a special needs teacher, so she returned to graduate school.

It was there she realized something about a career as a schoolteacher: "I don't think this is going to work out for me."

In that 2007 interview on video, Warren said, "I went back to graduate school and took a couple courses in education and said, 'I don't think this is going to work out for me.' I was pregnant with my first baby, so I had a baby and stayed home for a couple of years, and was really casting about, thinking, 'What am I going to do?' My husband's view of it was, 'Stay home. We have children, we'll have more children, you'll love this.' And I was very restless about it."

Then she went to law school and she was happy.

Is Elizabeth Warren a liar?

Has she become stuck in her own web of embellishments?

Or is this something else, the need for American political candidates to create creation myths to appeal to specific voter demographics, and the yearning of those groups to hear their liturgy sung back to them?

Angry Warren supporters naturally blame conservatives for Warren's troubles. But it turns out the controversy was first flagged on Twitter by Meagan Day, a writer for the leftist Jacobin magazine. Later it was picked up by the conservative Washington Free Beacon, then others.

Anyone telling you that Warren was exposed by conservatives is peddling hysterical tribal nonsense.

Through a reading of school board minutes and newspaper stories of the time, the Free Beacon noted that far from firing Warren, the Riverdale Board of Education approved a second-year teaching contract for Warren.

This flatly contradicts her repeated claims that she was asked not to return because she was "visibly pregnant."

Warren is doubling down, insisting she was indeed fired because she was pregnant. She doubled down for a while on the DNA test too. Her media allies will weave her a cloak of mitigation, but the damage has been done.

Those like me who point out the inconsistencies of her myths are condemned as misogynists by her angry partisan hordes.

And much of the media, which leans left, would rather not consider this story. They're consumed by Trump Impeachment Theater, allowing them to fixate instead on Orange Man Bad, or Trump = Joker.

But either way, authenticity has long been a problem for Warren, as it is for Biden.

The fabulous business career of Biden's son Hunter, aided as it was by bosses in Ukraine and China even as Joe was the Obama administration's point man in those nations, undercuts Biden's myth as just a working-class guy from Scranton.

The authentic Democrat is Bernie Sanders, a self-described hard-left socialist. He's had a heart attack. But at least Sanders says who he is. The others must tell their stories.

And Sen. Two Tales has run out of stories to tell.