George H.W. Bush Was Indeed a Prudent Man, and the World Was Better For It

John Kass
|
Posted: Dec 07, 2018 12:01 AM
Share   Tweet
The opinions expressed by columnists are their own and do not necessarily represent the views of Townhall.com. 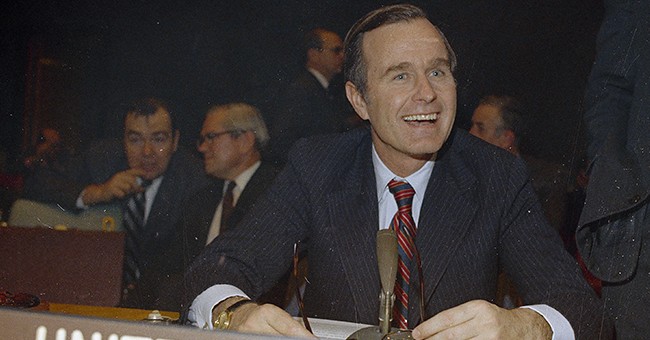 The funeral of former President George H.W. Bush was a great celebration of a noble American patriot.

There were the tears of his son that I won't forget. And there was the respect shown to him by his nation. But it was that nation that had turned him out of office after one term for a most uncivil man, who defiled the Oval Office from the start.

And as Bush was mourned, America was being admonished by a most uncivil media for its general lack of civility.

It was a political funeral, a grand state funeral for a president. One who prudently -- yes, prudently -- used restraint and prevented nuclear war, as a desperate and frightened nuclear Soviet Union began its final collapse.

George H.W. Bush, 94, had been a young pilot shot down over the Pacific in World War II, and a Texas oilman, congressman, diplomat, director of the CIA, vice president and president. But he was also a father, mourned by his family.

"So through our tears let us see the blessings of knowing and loving you," said his son, former President George W. Bush, the 43rd president, talking of family, and of his late mother, Barbara, and his sister Robin, who died of leukemia as a child.

"A great and noble man, and the best father a son or daughter could have. And in our grief, let us smile knowing that Dad is hugging Robin and holding Mom's hand again."

It was that moment, the son's voice breaking, chest heaving, then pulling himself together and continuing, that will be difficult to forget.

As will the memory of ancient former Sen. Robert Dole, the Kansas Republican and fellow World War II veteran, being helped from his wheelchair to stand and salute Bush's casket the day before.

But there are other moments about the death of George H.W. Bush that will be impossible to forget, too, like the disgraceful sentimentality of mewling hypocrites.

The late president's critics in politics and media had despised, mocked and dishonored him in life. But they sure loved him in death. And they used him as a weapon against their enemy, President Donald Trump and the millions of Americans who voted for him.

Bush had been dismissed by the ever left-leaning media as a colossal wimp, a cold bloodless preppy, unable to feel our pain, an establishment patrician so out of touch that he didn't know about grocery scanners at the supermarket.

He was vilified as a racist, a moron, a fool, again and again by liberal pundits with one object in mind: propelling Bill Clinton into the White House.

But shortly after word of Bush 41's death, there they were, on cable TV, in print, talking of honor, bemoaning the loss of Bush's civility, mourning the loss of his kindness, with constant comparisons to Trump, a slugger who is neither kind nor gentle.

They propped Bush up on a horse, in the manner of El Cid at the siege of Valencia from centuries ago, tying him to the saddle so he might ride out, sightless, to shame and rout their enemies.

They've done this before, most recently with the death of Trump critic and Republican establishment Sen. John McCain of Arizona. Though McCain never met a war he didn't like, he was beloved by the media until he posed a threat to the election of President Obama. Then they turned on him too.

George H.W. Bush wasn't a nifty orator. The fusion dreamed of years before by William F. Buckley, melding traditional conservatives and anti-communist neoconservativism began to unravel under Bush. His greatest political blunder was raising taxes after issuing his "Read my lips, no new taxes" pledge. This wore the establishment down and gave rise to populist, anti-big government movements, from a third-party challenge by Ross Perot that put Clinton in office, to the tea party and ultimately to Trump.

Bush was an establishment blue blood, yes, but also a warrior, and perhaps because he knew of death in war firsthand, he learned something invaluable: When you have the power to break the world into pieces, be prudent.

Be prudent was the line used against him. Years ago he was mocked by Dana Carvey of "Saturday Night Live." "It wouldn't be prudent," Carvey would say, and the impression was hilarious. It reduced Bush to a tightass. But the tightass graciously invited Carvey to the White House and appeared on "SNL" and got a laugh.

Yet it was prudence and skill that helped Bush manage chaos. He deftly accomplished the unification of a divided Germany, while refusing to expand NATO further and risk nuclear war with a frantic Russia.

And prudence again during the first Gulf War, when he would not send his legions to occupy Baghdad. That would have led to chaos. He left all that to his successors, like his son.

President Clinton pushed to expand NATO. Bush's son would expand NATO even further. And in the second Gulf War, the son, captured by the neocons, would send his legions into Baghdad, thinking he could rebuild nations in our image. It failed. Our troops are still there. And we inch closer to confrontation with Russia's Putin.

I suppose (though I hope I'm wrong) that America knows more about Bush's loyal service dog, Sully, than his successes and failures in office.

But he loved America. And he served her with honor all his life. Godspeed, Mr. President.