John Kass
|
Posted: Mar 24, 2018 12:01 AM
Share   Tweet
The opinions expressed by columnists are their own and do not necessarily represent the views of Townhall.com. 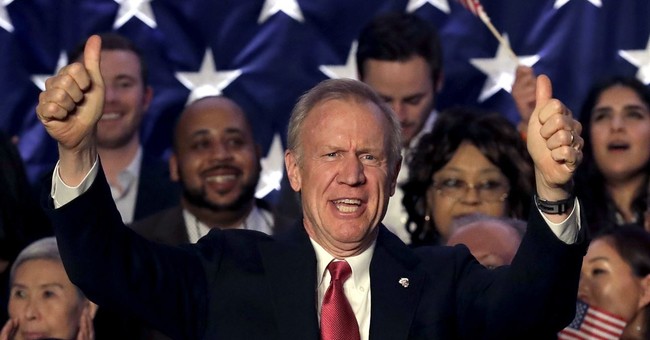 If wealthy Illinois Republican Gov. Bruce Rauner finally hosts a post-primary "unity breakfast" -- to put the party he smashed back together again -- pay attention to the silverware:

Ball-peen hammers will do quite nicely.

Why hammers? Because he's already all out of hatchets.

Clearly, a hammer might not be the best utensil for scooping up lukewarm hotel eggs as he tells the GOP how he plans to defeat billionaire Democrat J.B. Pritzker in November.

But hammers will do.

Rauner's bankroll pummeled his conservative challenger, state Rep. Jeanne Ives, and he hammered her with an onslaught of misleading ads alleging she was the evil creature of Democratic boss Mike Madigan.

"I am honored and humbled by this victory," Rauner said Tuesday night after his narrow victory over the relatively unknown and underfunded Ives. "You have given me the chance to win the battle against the corruption that plagues Illinois ..."

His was an awkward speech, delivered before she conceded. And while he seemed ostentatiously enthusiastic, it was clear by the look on his face that he understood what the numbers told him: It could be a bleak November.

His crowd of supporters behind him weren't thrilled, but looked drained, exhausted, like a people who know they're about to be driven on a long forced march and they're not quite ready yet.

His brief nod to the 48 percent or so of Republicans who opposed him was this: "For those of you around the state of Illinois who wanted to send me a message, let me be clear. I have heard you."

Over the next few days, Rauner's camp will again weave a story involving Boss Madigan and corruption and the Democratic compulsion to raise taxes without cutting the size and cost of government in this bankrupt state.

But Rauner also will skip over the reasons there was a primary challenge in the first place. His operatives will call this "moving forward."

Yet how can you honestly go somewhere if you won't acknowledge where you've been?

It was Rauner who invited a primary challenge by playing social justice warrior of the left, signing a bill that put taxpayers on the hook for paying for abortions, and also signing sanctuary state legislation.

Ives took the challenge, and that she came so close so quickly and with little statewide name recognition and nothing like his bankroll is a testament not only to her own message but of Rauner's low standing among the grassroots GOP.

Democrats know this, and the bosses salivate in anticipation of November.

So if Rauner has charted out a way forward to mend the intra-party rifts in the hopes of stopping Pritzker, it hasn't been articulated. And burning Boss Madigan in rhetorical effigy day after day just won't cut it.

Ives understands the problems are about more than allegiance.

"In the state of Illinois, we do not have Republican or Democrat problems," Ives said in her concession speech. "No, we have a math problem. ...

"You can't just spend yourself into oblivion, piling up millions of dollars in debt, while hundreds of thousands of people flee the state of Illinois, and think that things are going to get better the next day," Ives said. "It's got to stop."

But it won't stop, not anytime soon, not with a divided Illinois Republican Party, and not with Pritzker funding the Democrats who are moving further and further to the left.

Obviously, speeches and rallies aren't politics. These are reality TV shows, just like some "analysts" are partisan operatives with fiscal skin in the game.

Speeches are just part of politics. Money and leverage and policy are real politics. And how do you sort it all out? Look at your tax bill, that's how you keep score.

Yet sometimes a speech can give a hint of mood, and by contrast to those thousand-yard stares of the Raunerites, Pritzker's crowd was eager and thrilled, as if they'd just been invited to a picnic and J.B. was doing the cooking.

"I'm J.B. Pritzker and I'm gonna beat Bruce Rauner!" he shouted to wild applause. "I won't put on a costume and jump on a Harley and pretend to be someone I'm not!

"I won't blame everyone else for my inability to compromise or get anything done. I won't insult you by doing everything in my power to destroy the economy of this state and then look into the camera and say, 'I'm not in charge.'"

Pritzker's was quite a good speech, in a boisterous, confident, booming voice, like a joyful clergyman preaching to an adoring choir. And who knows? After all the donations Pritzker's been making to African-American ministers lately, he might be an honorary bishop.

His voice of joy sounded nothing like the purr he used in talking politics with former Gov. Rod Blagojevich on those leaked FBI surveillance tapes.

Rauner will use the Blagojevich tapes again and again, and he'll try to encourage Republicans to see Madigan in every shadow, given that Pritzker and Madigan are blood brothers now in the Illinois to come.

Pritzker will keep tying President Trump around Rauner's neck, though Rauner doesn't like, associate with, or even mention Trump.

And taxpayers will keep leaving the state by the thousands.

And I keep thinking of what Rauner said to all the Republicans who voted against him: "I have heard you."

He hasn't yet heard their full message, which they're likely to deliver on Election Day, when they stay away from the polls.