John Kass
|
Posted: Aug 10, 2017 12:00 AM
Share   Tweet
The opinions expressed by columnists are their own and do not necessarily represent the views of Townhall.com. 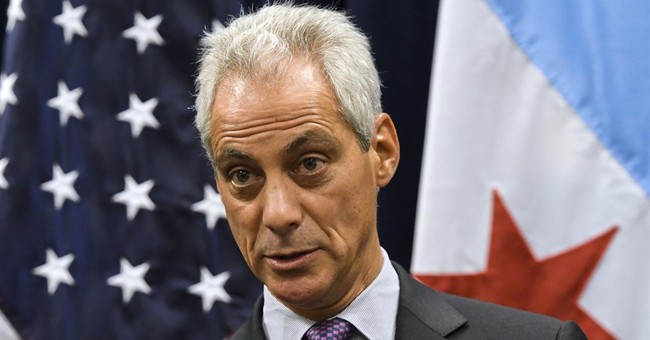 Before Chicago Mayor Rahm Emanuel feuded with Attorney General Jeff Sessions over federal immigration policy, before sanctuary city politics and long before Donald Trump became president, a man they didn't know was standing at a street corner in Chicago.

Dennis McCann, an insurance broker, was about to cross North Kedzie Boulevard and have dinner with a friend.

"He was going to meet a friend, a client, Jose Gonzalez, owner of El Cid, a restaurant there," McCann's brother Brian told me Tuesday. "They were close. My brother just wanted to cross the street and see his friend."

It was June 8, 2011, and Rahm Emanuel had just been elected a few weeks before on the charms of his former boss, then-President Barack Obama. Jeff Sessions was a senator from Alabama. President Donald Trump was just a rich guy on reality TV.

Most likely there was nothing on McCann's mind about illegal immigration -- and whether Americans have the right to control their own borders -- issues that would later propel Trump to the presidency.

What was Dennis McCann thinking about? "He was probably thinking the same stuff you and I would think about when we cross the street and a friend is waiting," said his brother, "like what to order, what to drink."

And he was hit by a speeding car.

All that was left on the street were his sandals.

And the rest of Dennis McCann was being dragged hundreds of feet down Kedzie.

"I heard the impact, saw this man go up into the sky and land on the windshield," witness Alberto Aceves told the Tribune at the time, describing how Dennis McCann fell off the hood to roll under the speeding car. "I pull up to the passenger side screaming at him. 'Stop! The guy's under your car.'"

The driver finally stopped the car, got out, tried to run and was arrested by police.

Saul Chavez, then 35, a Mexican immigrant here illegally, had been drinking heavily. The Cook County sheriff's office said Chavez had a blood alcohol content of 0.29 percent, more than three times the legal limit. Chavez had just completed probation after a drunken driving conviction two years before.

Chavez was charged with a felony -- aggravated DUI -- and was given a $250,000 bond. Two days after McCann was killed, federal officials filed an immigration detainer, believing Chavez was living in the U.S. illegally. The form requested that Cook County notify Immigration and Customs Enforcement if Chavez was scheduled to be released.

But as Chavez sat in jail, Chicago Democrats on the Cook County Board were playing immigration politics. Led by Cook County Board President Toni Preckwinkle and Commissioner Jesus "Chuy" Garcia, and catering to the Latino vote, they worked out a new policy:

The Cook County Board decided that federal detainer requests would be ignored, and those suspected of being in the country illegally and in jail on criminal charges could make bond without fear of deportation.

Chavez did make bond. Cook County did not notify immigration officials. And within days, what happened?

Chavez fled. He disappeared back into Mexico, where he remains out of reach of the short, stubby arms of Chicago's law.

"I've talked to the feds recently," said Brian McCann. "They know where he is. Chavez is in Mexico. There is a Mexican warrant out for him. But it hasn't been served."

McCann was quiet for a moment.

"What justice did my brother get? Chicago Democrats got to pander to the Hispanic vote and ignore the rule of law. And Rahm now gets a campaign issue. And my brother? Nothing."

"Chicago will not be blackmailed into changing our values, and we are and will remain a welcoming city," Emanuel said.

Hearing the mayor talk, so forcefully, you almost forget that he was stridently opposed to illegal immigration. And under Presidents Bill Clinton and Obama, he demanded repeated and high-profile federal immigration raids and deportations and crackdowns at workplaces across America.

What's amusing is that some are so blinded by their hatred of Trump, and so oblivious to how Chicago politics really work, that they're actually applauding Emanuel for standing up to alleged Trump bullying.

Rahm must smirk at such useful idiocy. It all plays into his hands. He's hurt himself with African-Americans, so he drops his sanctuary city card again and again, cozying up to Latinos as he seeks re-election.

"Under Clinton and Obama, Rahm was against all this," said Brian McCann. "Now he's a sanctuary cities proponent. The rule of law is always compromised by power politics. That's all this is: power politics for Rahm and Preckwinkle. And public safety be damned."

And you wonder why Trump won the election?