Americans Microchipped in the Land of the Free

John Kass
|
Posted: Aug 01, 2017 12:00 AM
Share   Tweet
The opinions expressed by columnists are their own and do not necessarily represent the views of Townhall.com. 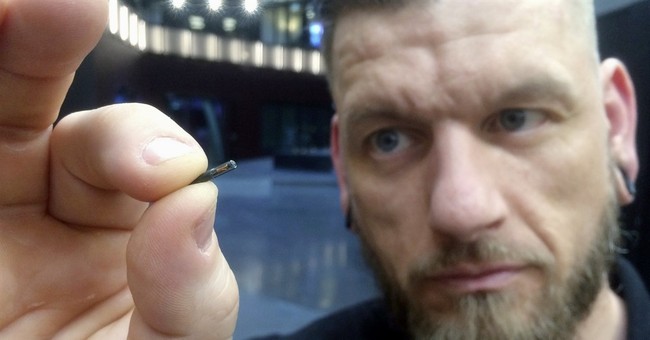 Just a short time ago, some of us born in the land of the free and the home of the brave were horrified by a sci-fi nightmare that we were told would never, ever happen:

That someday, Americans would eagerly allow their wise corporate masters -- and eventually their government overlords -- to install computer microchips in their bodies to "help" them.

That future is now at a vending machine development company in Wisconsin.

The company, Three Square Market, will soon hold a "chipping party" for loyal employees who volunteer to have a chip inserted into their hands.

Most great ideas begin with a party. I'm hoping the chip party in Wisconsin features cheese. Many mammals like cheese, including humans.

"Eventually, this technology will become standardized, allowing you to use this as your passport, public transit, all purchasing opportunities, etc.," chief executive Todd Westby said in a statement.

Please don't get the wrong idea. I'm not upset about this. I'm not at all upset at all.

But chipping isn't exactly slavery, per se, is it? It's voluntary.

My former opposition to human cyborgs linked to computer networks was most likely the residue of old, now thoroughly discredited ideas.

Ideas like "the primacy of the individual" and "freedom" and "liberty" and other socially awkward concepts generated in a now mostly forgotten place once broadly called the "West."

But those idiotic notions will soon be gone. Pundits and broadcast news executives -- and Hollywood movies and TV shows -- take great liberties with the lash, whipping away those subversive ideas born long ago.

America is changing. We're quickly abandoning old fuddy-duddy notions, and becoming New Americans who don't mind being herded into doing what's best for us and our countrypersons.

Why? For one thing, I don't want to be shamed as a "science denier" and be mocked by liberals who once thought me "different." Now that I've bent the knee, and am publicly pro-chip, will I be invited to lunch?

The benefits of chipping Americans are simply endless.

What corporate or political leader wouldn't want a happy, chipped workforce and happily chipped citizens, so proletariats might be more productive in their daily lives?

If Americans are all implanted with chips, we could control immigration, we could vote more easily, even in the primaries, and our wise masters would know how we voted.

If Americans became chippers, we'd pay our taxes more efficiently. We might even receive much social praise and tax credits too, for allowing independent experts to check our bio-rhythms against what we read online to measure our reactions to subversive ideas.

Chipping will eventually become the standard, with Republicans and Democrats joining to offer tax incentives to businesses to chip their employers.

And, as workers clamor to be chipped to save their jobs, the federal government will expand the service, and soon we'll all be joined, together, in harmony, with help from the U.S. Department of Chipping.

According to the Wisconsin company, the chips inserted in their workers will help them open security doors, store personal medical information, log into their computers and more easily purchase snacks.

Who doesn't want to easily purchase a snack of tasty vending machine cheese?

What's even nicer, it's been promised that employers would never use the chips to track workers.

Cynics might infer that once the federal government gets involved -- first with passport chips to protect against terrorism -- that some politicos might use the technology to nefarious advantage.

But who'd ever dare do that?

"I wouldn't mind if I were chipped," said a lawyer I know. "I've already got a phone. And I've got nothing to hide."

That nothing-to-hide business is certainly a powerful argument indeed, especially in this modern age where our federal agencies can read our thoughts as we type them, and Americans nervously self-censor troublesome concepts.

The Fourth Amendment? What's that in comparison to being a part of a team? Not that I'd ever complain about the wise masters chipping me. I too, have nothing to hide. Please don't hurt me.

By carrying medical information, chips could ultimately read genetic maps on a chipee's intellectual potential and other talents.

The wise masters of government might even consider mandating small tattoos on our faces; say, on the left cheekbone just under the eye, with icons to mark us by our occupations and skills.

But only as a backup, in case the chips suffer technical issues.

A few Wisconsin workers are skeptical about health issues (i.e., foreign objects inserted into their bodies to help them become more efficient) and other nebulous concerns.

But this too shall pass.

Naturally, not all will follow eagerly. Some might cling to the old ways. First, the resisters will find themselves unemployed. Then they'll be ridiculed as deplorable.

Finally, our wise masters will order entertainment and media leaders to poke gentle fun at stubborn Americans who insist on remaining chipless, like so many wild beasts.

Such themes will be magnified on social media. We know there's nothing quite like mockery and public ridicule to convince stubborn people to conform.

And the rest of us will titter at those primitive, chipless fools.

God Bless America. Is there anything we can't do?